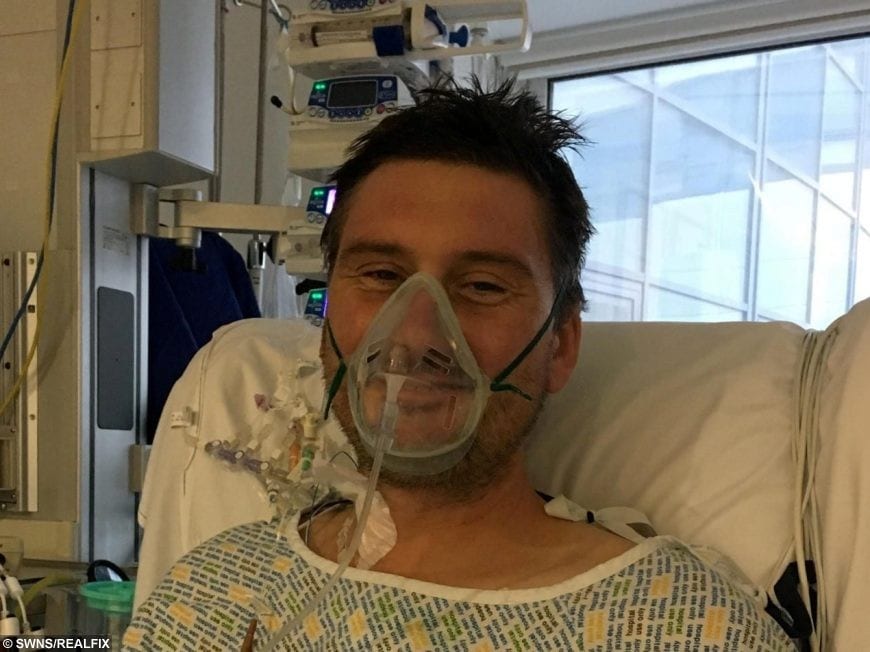 A firefighter needed open heart surgery when he got a potentially-fatal blood infection –
after getting POPCORN stuck in his teeth.

Adam Martin, 41, was “on death’s door” after the deadly infection attacked his heart and left him fighting for life.

He contracted an infection called endocarditis after he struggled to dislodge the piece of popcorn stuck between his teeth.

Endocarditis occurs when germs from another part of your body, such as the mouth, spread through the bloodstream and damage areas of the heart.

Doctors quizzed him about a possible cause and the only thing Adam can think might have caused the infection is his constant wiggling and poking at the food lodged in his teeth.

Adam said he stuck everything from a pen lid, tooth pick, a piece of wire and even a metal nail in his mouth in a desperate attempt to remove the popcorn.

The constant playing around with his mouth caused toothache after he damaged his gum, but instead of going to the dentist, he did nothing.

A week later Adam developed night sweats, fatigue, headaches and eventually a heart murmur, which are all signs of the infection.

Father-of-three Adam, from Coverack, Cornwall, said: “The doctors told me if I hadn’t gone to the GP when I did then I could have been dead in three days.

“Most people die when they are at 350 on an infection scale and I was at 340. The infection had eaten my heart valves completely.

“If I had gone to the dentist in the first place then none of this would have happened. At one point it was quite touch and go. It was the worst experience of my life.

“I wasn’t far off death’s door and I am extremely lucky. The popcorn stuck in my teeth is the only possible cause I can think of. I am never eating popcorn again that’s for sure.”

Adam’s life-threatening ordeal started when he shared a bag of popcorn while watching a film with his wife, Helen, 38, at the end of September.

The popcorn stuck in a tooth in the back left of his mouth, drove him crazy for three days and no matter how hard he tried, could not dislodge it.

Adam admits he playing around with his gum with random things he found lying around to dislodge it.

A week later Adam developed what appeared to be a cold, which then turned into what was assumed to be flu, and on October 7 he went to his GP.

The doctors diagnosed a mild heart murmur and sent him for blood tests and x-rays, which came back showing nothing more significant than slightly raised inflammation markers.

Adam was sent home with medication to recover under his own steam, but a few days later, he was still experiencing flu-like symptoms.

He also developed a blood blister on his toe – which was later diagnosed as a Janeway lesion, an external indication of infective endocarditis.

Endocarditis is an infection of the endocardium, which is the inner lining of the heart chambers and heart valves.

It can lead to bacteria spreading through the bloodstream and damaging areas in the heart. If it’s not treated quickly, endocarditis can damage or destroy heart valves.

Worried about his worsening current condition, Adam went to the Royal Cornwall Hospital on October 18.

He said: “I had a feeling there was something seriously wrong. I was sleeping an awful lot and I felt terrible.

“I had aches and pains in my legs and I just did not feel right at all. I was admitted to hospital the same day for tests. By this point I was very worried.

“I felt quite ill and I knew I was not right at all.”

The muscle ache in his leg turned out to be an infected clot, wedged in his femoral artery which required a five hour operation to clear.

Adam was being treated with medication to fight the infection but chest scans revealed his heart had been severely damaged – and would need an urgent operation.

He was transferred to Derriford Hospital on October 21 and had seven hour open heart surgery to replace his aortic valve and repair his mitral valve, damaged by the infection.

Adam said: “My heart was not properly working anymore. It was essentially wrecked. The infection had eaten the valves away.

“I should have just gone to the dentist in the first place. I don’t want anyone to go through what I have done.

“It all happened so quickly and it did get sketchy. I won’t be going near popcorn again, that’s for sure.

“It’s crazy to think all this happened because of that. It was something so trivial.”

Adam made a quick recovery following surgery and returned home to his wife, Helen, and three children Megan, 15, Holly, 14 and George, seven, at the end of October.

Teaching assistant Helen said: “Any sign of toothache, bleeding gums, abscess – get it checked out!

“It is also well worth noting the date in case you get ‘flu like symptoms’. If Adam’s infection was caught earlier it could have been treated with antibiotics.

“Your gums are a bacterial highway to your heart.”