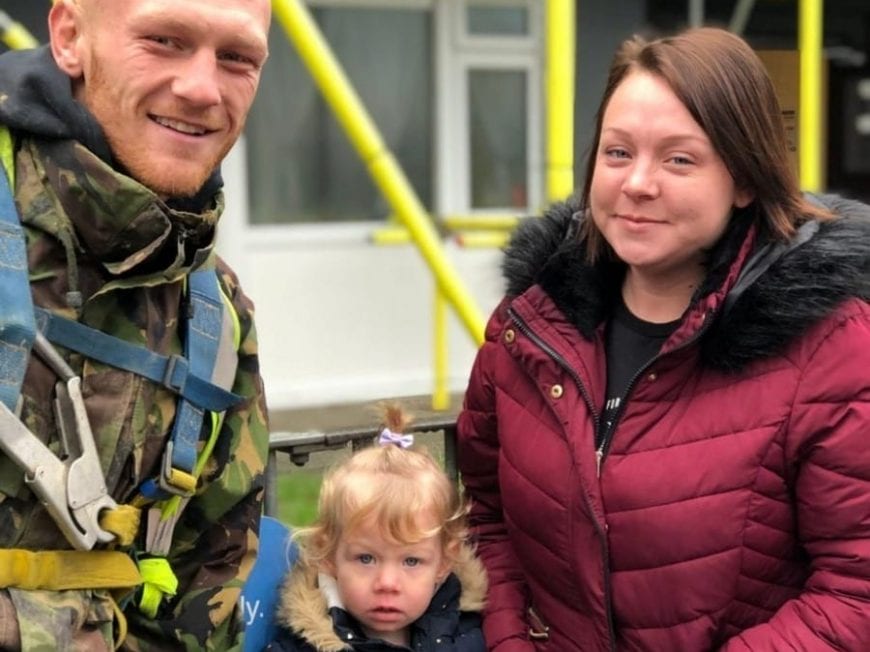 A scaffolder turned life-saver by jumping down to rescue a toddler who had choked on a 2p coin.

Lewis Everson who sprang into action when mum Jordane Hersey ran out of her block of flats screaming for help carrying her two-year-old Isabelle.

She had somehow swallowed the coin in the family kitchen and was struggling to breathe.

Lewis Everson took Isabelle into his lap then hit her back several times – dislodging the coin.

Lewis’ colleague Matthew then rang for an ambulance and the pair waited with Ms Hersey until paramedics arrived to check her over.

Ms Hersey, of Plymouth, Devon, said: “We were making cakes in the kitchen and Isabelle got hold of some loose change.

”She put a coin in her mouth and tried to swallow it.

“I tried hitting her back and my older child couldn’t find my phone so I started panicking. I went to the door screaming for help.

“Lewis and Matthew were there. Lewis gave her a good hit on the back while Matthew rang for an ambulance.

“I am so thankful they were there and did what they did. They said they did nothing but I know Lewis was shaken up afterwards. He was very modest.

“I lost a son at 17 months old six years ago and it brought it all back.”

Lewis said: “There were a few of us. We heard some screaming and didn’t know where it was coming from. We ran over and saw the baby choking.

“I grabbed her and put her on my lap and whacked her back hard a couple of times. She was choking on a 2p coin.

“It all happened so quickly. The baby was okay – she just had a big hand-print on her back.”

Lewis, who works for Drake Scaffolding, which was carrying out work at the Plymouth Community Homes building where the family lived, said he felt ‘shaken’ after seeing Isabelle choking, and was glad he had completed his first aid training.

He added: “I was a bit shaken up. I had to sit in my car afterwards. I just thought it could have been my own son – he’s only a few months older than this baby. I’ve done first aid training and you don’t forget it.”

Owner of Drake Scaffolding, Shane Radmore said: “Lewis has done First Aid with us and other companies.

“He’s a nice lad. Lots of people would have panicked. He has a young child himself so it was probably instinct to help out.”

PCH Health and Safety Advisor, Chris Beer added: “We’d like to thank Lewis for his efforts in assisting with this emergency. He saved the baby’s life.”

« Previous post 'She Was In Terrible Pain & We Had No Idea What Was Going On' - Teen Miraculously Learned To Walk Again - After Suffering An Acute Spinal Stroke At Just 13-Years-Old
Next article » Crash, Bang, Wally! I'm Married To Britain's Clumsiest Man