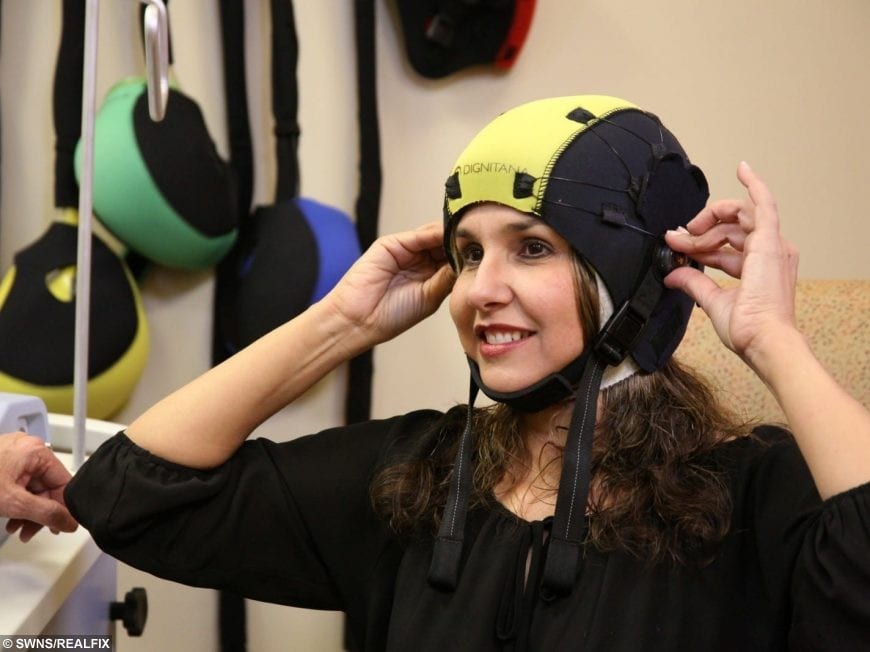 A cancer-stricken bride who feared she would have to cancel her wedding if she lost her hair due to chemotherapy managed to keep her blonde tresses by wearing a protective HAT.

She considered calling off her big day because she didn’t want to walk down the aisle as a bald bride.

When her doctor suggested a specially designed cooling cap which prevents hair loss in women undergoing chemotherapy, Allison was willing to try the contraption.

The cooling cap, known as a DigniCap, slowed down Allison’s hair loss and she married Micheal in a romantic ceremony last June with her hair swept into an elegant updo.

The bride, who has graduated with a masters in engineering and is now officially in remission from cancer, is delighted she was able to go ahead with her wedding.

Allison, from Denver, Colorado, USA, said: “I am super happy I went ahead with the wedding. I was definitely hesitant but I got what I wanted.

It was Michael who first noticed the two little lumps on Allison’s right breast in November 2017.

She said: “My husband noticed them, I never checked my breasts. I went to a campus doctor and he told me that they were probably nothing.

“I had an ultrasound and was told to come back in six months. I wasn’t worried because I was so young.

“But I noticed the lumps growing so I returned after three months. I wanted them off my body.”

Allison was devastated when she was diagnosed with stage two breast cancer.

She added: “Cancer is scary and it just sucked to learn that I had it. The cancer had spread to one of my lymph nodes but there were no tumours elsewhere.

“That was good news, it was a huge relief. Michael and I cried when the doctor told us.”

The couple faced the difficult decision of whether to cancel their upcoming wedding.

“I didn’t want to look at all my wedding pictures and associate it with a terrible time in my life.

“I didn’t want to have what should have been the happiest day of my life at the worst time in my life.”

Allison was particularly worried about losing her long dirty blonde hair during her fortnightly chemotherapy sessions and dreaded the thought of walking down the aisle bald or wearing a wig.

She said: “Every time I went to chemo, I was scared that my hair would fall out. I just wanted to look like myself.

“Part of me just wanted to shave it all off, I didn’t want to deal with it falling out slowly.”

She shared her concerns with Dr Virginia Borges, an oncologist at the University of Colorado Hospital, who suggested Allison use a Dignicap.

Borges said: “What it does is it lowers the temperature of the scalp so that the hair follicles don’t see the chemotherapy and by that happening the hair does not fall out at all or at least not to the same degree that it would have.”

Allison said: “You basically freeze your head, it feels horrible. The chemo doesn’t hurt, you can’t feel it, but I wanted to tear the cold cap off my head. But it worked.

“I did lose a lot of hair, perhaps 50 per cent, but I could hide it. People would tell me I looked so good.

“I could see bald spots but I hid them by styling my hair in a particular way. One of the hardest things was that I always liked how I looked.

“I don’t dye my hair, I don’t wear much makeup, I like the natural look. When I lost my eyelashes and eyebrows, it sucked.

“I got my brows microbladed which worked out super well and luckily the cap stopped me from losing all my hair.

“When I saw the cold cap was working, I wanted to go ahead with the wedding. Of course, it wasn’t only about my hair.

“I’m generally quite laid back, but after my diagnosis, I just wanted to get married in front of my friends and family.

“Michael really felt like my husband and I wanted to officially call him that. He accompanied me to all of my chemo sessions and all my surgeries. He is so perfect and I’m so lucky.”

The lovebirds tied the knot on June 30 2018 in front of 230 guests in Michael’s home town of Springfield, Ohio.

Allison said: “It ended up being perfect. People danced the whole night, our DJ played extra songs for us, everyone was still there in the early hours.”

The couple honeymooned by going rock climbing in Utah, Colorado and Arizona.

She added: “We went on a two-week road trip. We are big rock climbers and we scaled mountains in Utah, Colorado and Arizona.”

In November, four months after the wedding, Allison learnt that she was in remission but she is still cautious about being given the all clear.

She said: “I finished radiation in November and that was the end of my treatment. Every three months I go for a blood test. Cancer can come back and I do think of that.”

The experience has changed Allison’s perspective and made her grateful for each moment she has with her new husband.

She said: “I definitely think of the future differently now. I don’t think of ten years down the line, the timeline comes in shorter chunks.

“I want lots more rock climbing trips, lots of travel and enjoying my life with the people I love. I am able to appreciate the moment now.

“Before, sometimes I experienced a pressure that I should enjoy the moment and it would make me stress out about it.

“But ever since my diagnosis, I’ve accepted that not every moment is going to be perfect.

“Life is not perfect, it’s never been perfect and it’s never going to be perfect so you learn to enjoy the imperfection more.”

Allison shares her experiences of living with cancer on her Instagram @dynosoarlife. 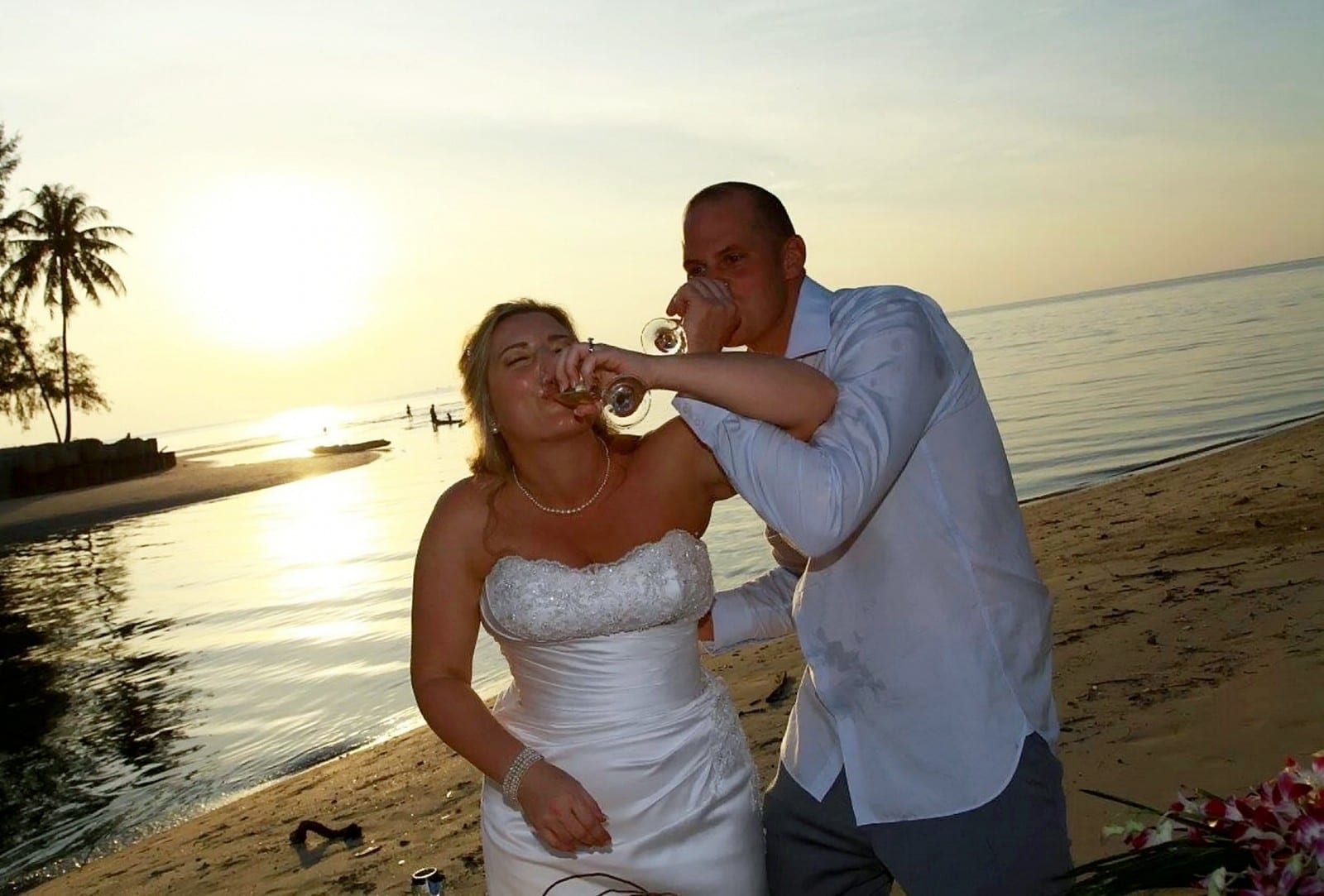