A woman who chose to have her foot amputated after years of pain from a childhood accident wrote a ‘break up’ note on it stating: “It’s time we parted ways”.

Jordan Beckwith, 27, made the heart-wrenching decision to become an amputee after growing tired of non-stop surgery as a result of the horse riding fall.

Before the two-and-a-half-hour operation, the realtor, of Colorado Springs, Colorado, USA, scribbled a note on her limb to say goodbye to her right foot.

Alongside jottings from friends, she wrote: “It’s not me, it’s you. I’m sure we’ve had some good times together, but it’s time we parted ways. I wish you all the best.” 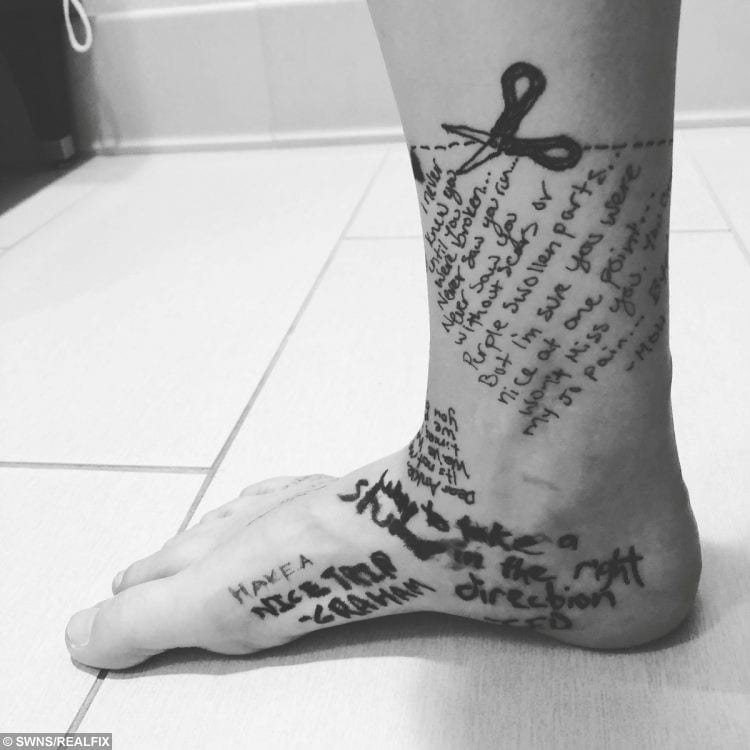 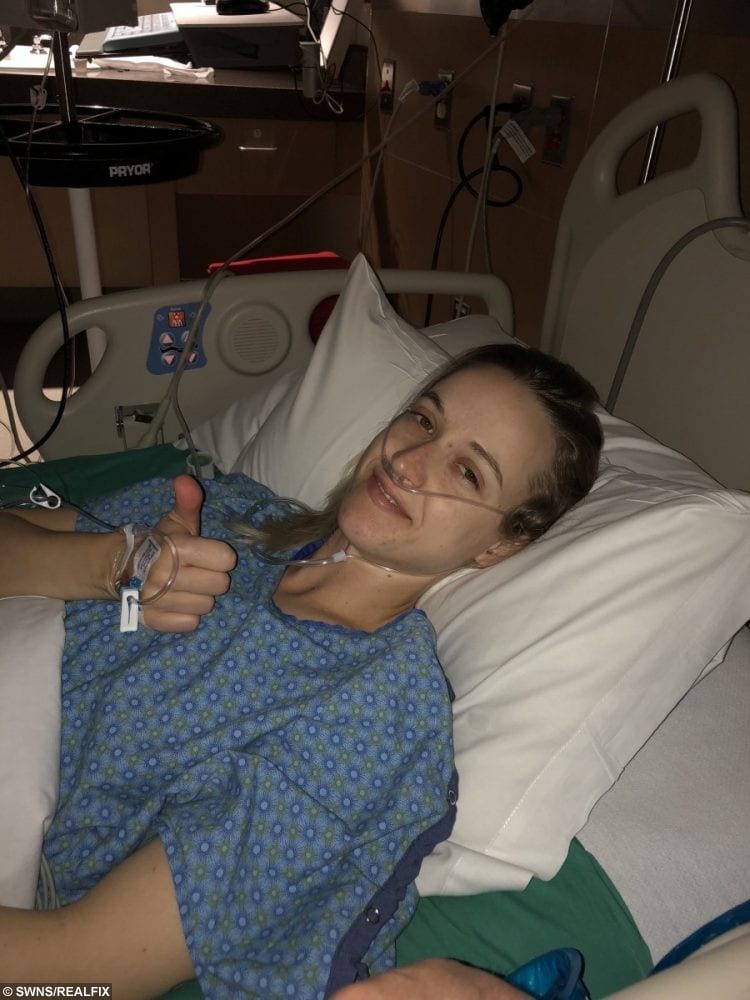 She signed off the note: “Your blood supplier”.

Jordan, married to Brian, 35, a financial advisor, was just 13 when she was thrown from an over-excited horse and shattered her ankle in 2005.

She said: “My horse tripped and I went over her shoulder. I landed on my neck and blacked out for a second.

“When I came to, my ankle was bad, I was in pain. I tried to stand up but I blacked out again.” 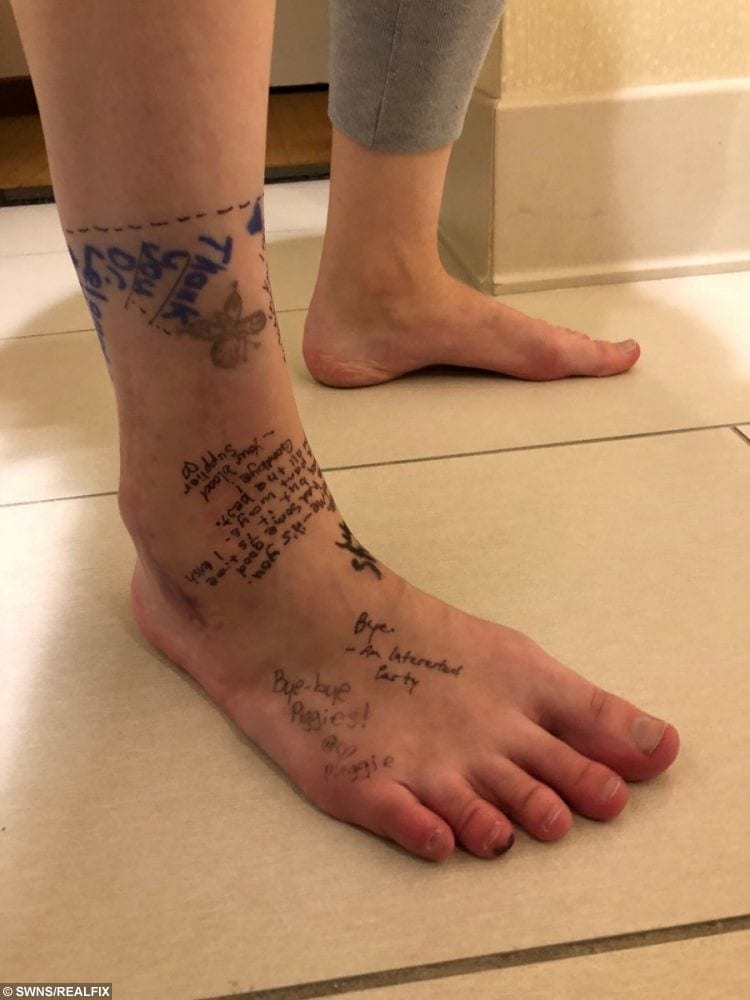 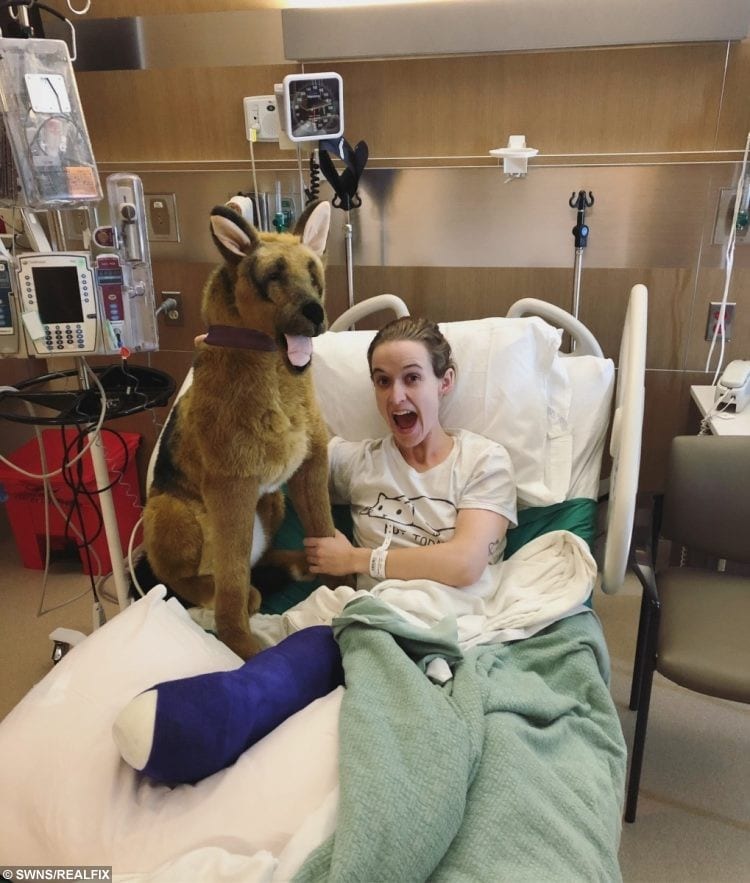 She was taken to urgent care where doctors discovered she had broken the tibia bone in her lower leg and the shattered fragment was lodged in her leg.

“The bottom chunk of the bone had broken. An inch of it had snapped off and was shoved up into my leg,” she said.

“It was a very, very odd injury.

“The doctor called to another doctor and they said they had never seen something like it before.”

Jordan was forced to wait three days before her ankle could be operated on, because it was so swollen.

“They couldn’t fix it right way,” she said.

“It was so swollen that the skin wouldn’t have closed.” 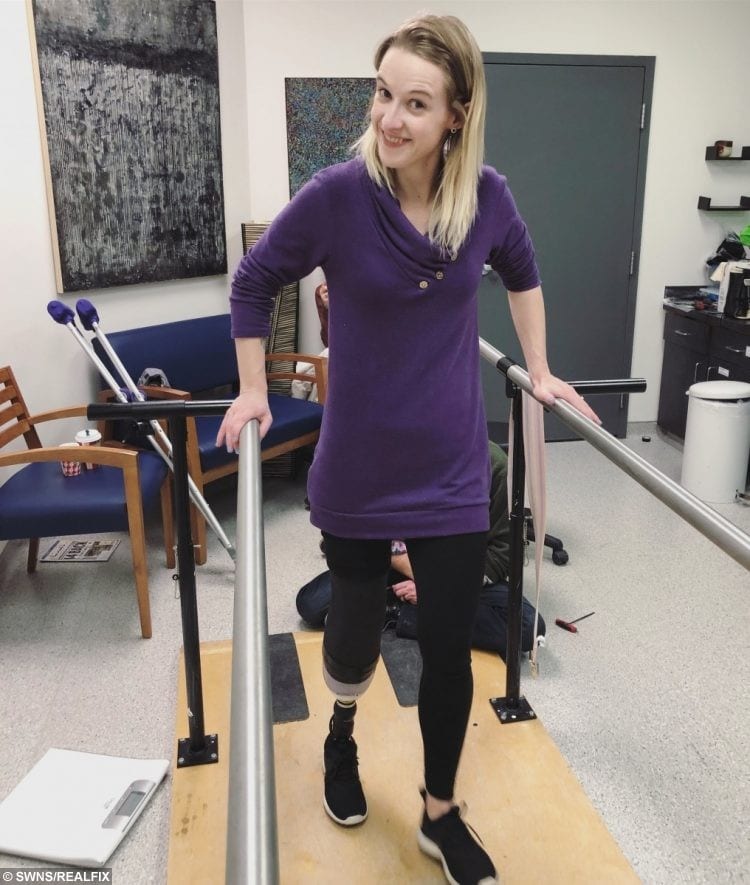 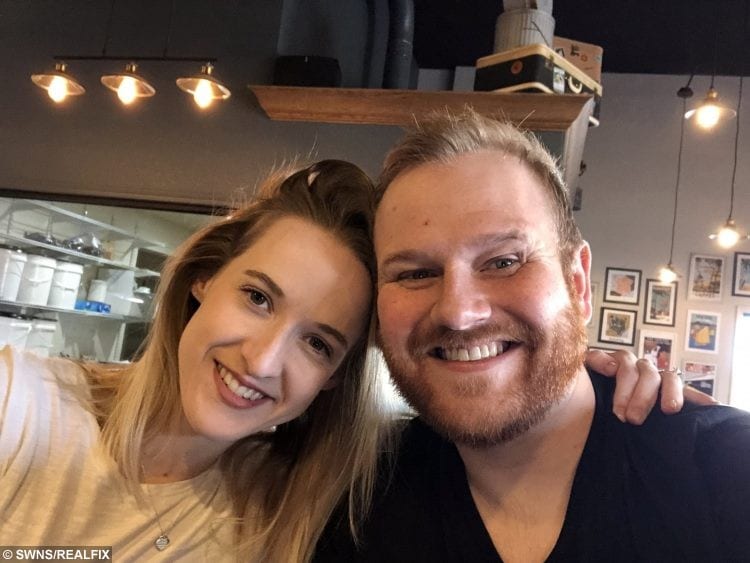 Two months later, an X-ray revealed that the surgery had been unsuccessful.

She said: “The doctor said it hadn’t aligned right.

“They broke my ankle again and redid the surgery.

“But it always hurt. I was taking handfuls of Advil to deal with the pain.”

A year later, she underwent an ankle fusion where the bones of her ankle were connected with a steel plate and six screws.

She said: “It never felt right. All through high school, I was in pain.

“For the last 14 years, I’ve always been on some kind of pain medication.

“I have been active but I’m always limping.

“About 18 months ago, I got to the point that it never got better.

“There were only bad days.

“I couldn’t do jiu jitsu. I was icing my ankle every night.

Last June, Jordan visited a surgeon in Denver, Colorado, who told her that she had a choice: a risky ankle replacement or an amputation.

She said: “The problem with an ankle replacement is that it is meant for someone much older.

“The ideal candidate is 60 or older and hasn’t had prior ankle surgery.

“I initially scheduled the replacement because my family was adamant that we try everything else first because losing a limb is such a big deal.

“But the more I thought about it, amputation struck me as inevitable.

“I had to take all the emotion out of the decision.

“This would give me the highest quality of life.

“It would help me walk and maybe run, I could participate in sports again.

“I had many conversations with my family and eventually they understood and supported me.”

On October 11 2018, Jordan’s leg was amputated just below the knee at University of Colorado Hospital in Denver, Colorado.

She said: “I looked up every YouTube video and every article I could about being a below-the-knee amputee. 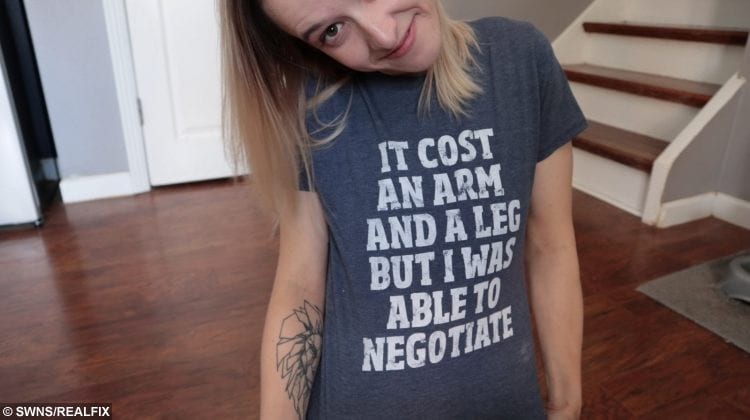 When Jordan woke from the operation she was in terrible pain.

“The nerve block hadn’t worked and I felt all of the pain of the foot being gone.

“It was horrible. It took them three and a half hours to get the pain under control.

“But the first thing I thought was: I am really glad I made this decision.”

Jordan is still adapting to life without her right foot, trying out her new prosthetic leg, using crutches and experiencing uncomfortable stares while grocery shopping.

She said: “Grown up adults who should know better stare at me for 20 seconds and then whisper to their friends.

“I feel like saying: ‘Guys, come on, if you have a question, ask me, or at least be a little less conspicuous.’

“It is hurtful and it is really weird to be a spectacle everywhere you go.

“It is a really big loss and I am living through the grief of it.

“There have been rough moments like when I wonder whether my husband is still attracted to me.”

She credited sharing her experiences on her YouTube channel, Footless Jo, with aiding her recovery.

She said: “My YouTube channel has really helped me process everything.

“Sharing what I’m going through, gives me strength and makes me feel like I’m helping others.”

Jordan hopes one day she’ll be able to lace up a pair of sneakers and go for a run.

She said: “I have not been able to run at all since I was 13 years old.

“I have wanted to run for ever and I’ve been super jealous of people who could.

“I’ve already looked into getting a running leg.

“I think a marathon would be super cool.

“Even just going for a jog down the road would be wonderful.”