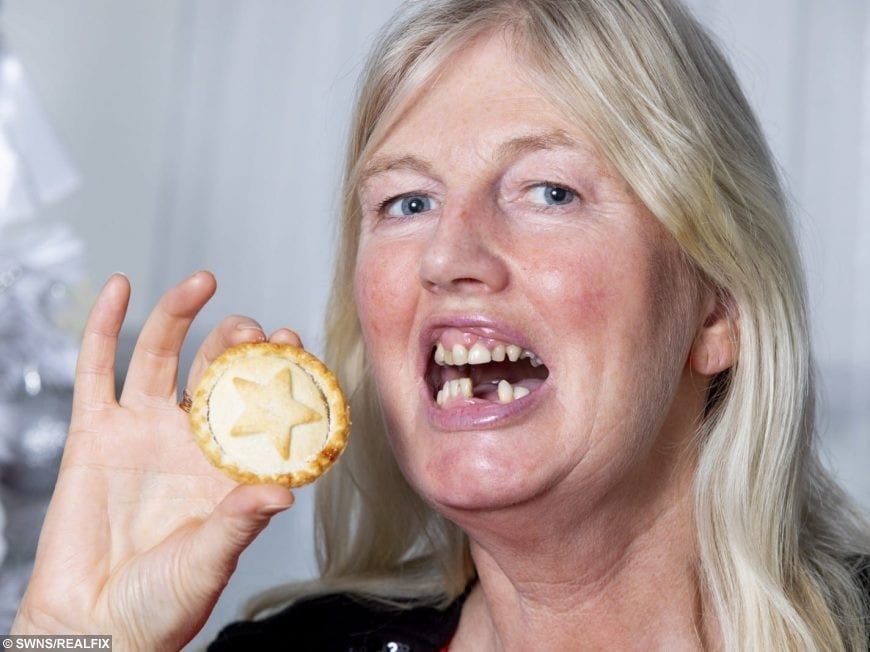 A mum said ‘all she wants for Christmas is her two front teeth’ – after accidentally swallowing her dentures while eating a mince pie.

Angela McGill, 52, was tucking into the festive snack when she swallowed what she thought was a bit of pastry.

The caterer went to hospital and an x-ray revealed the plate was stuck half way down her throat.

Medics advised any procedure to pull the plate back up her throat would do more good than harm.

So Angela had to wait 72 hours for her dentures to pass through her digestive system – before she flushed them down the loo.

Mum-of-three Angela, from Glasgow, is “finding the funny side to this right cock-up” – but has sworn off mince pies forever.

She laughed: “I just couldn’t believe I’d swallowed my plate – how silly is that?!

“And I was really enjoying the mince pie too, I just got distracted when someone I work with said my name and I gulped.

“It was rough, and really hard – I thought it was a tough piece of pastry!

“Then it went down, and got lodged at the back of my throat, and I thought – ‘oh my god, I’ve swallowed my plate, I’ve literally lost my teeth!’.”

Angela had her inch-square partial dentures fitted last month to replace 40-year-old caps she had fitted as a girl after an accident.

“I was swimming when I was about 11 when this boy jumped in the pool, knocked me, and then I clattered my teeth against the edge of the pool,” she said.

“Forty years on, the crowns needed replacing obviously, so they fitted me with two front teeth on this plastic plate instead.”

Unused to her new teeth – which are on her bottom left-side – Angela accidentally swallowed them while eating a mince pie from supermarket Aldi on December 3.

Angela, a kitchen assistant in healthcare, went to Queen Elizabeth University Hospital, where medics advised to let the plate pass through her digestive system.

“When I got to hospital, it got funnier, because they’d said it would do damage to my throat if they tried to pull the plate back up,” she said.

“So they told me to wait three days for the plate to pass through my system.

“I think I made their day to be honest, maybe even their year! It was ever so funny!”

Angela then added: “Obviously I wasn’t going to be using that plate again – like I say, all I want for Christmas is my two front teeth!”

She is waiting to get a new set fitted – and hopes she’ll get them in time for Christmas.

« Previous post How Does a Pet Tracker Work?
Next article » 'It Felt Like We Had Been Given A Miracle' - Mum Of One Black & One Black Albino Twin Admits Strangers Ask If Both Children Are Hers