A little lad needs a £30,000 operation to help him walk again after he suffered brain damage – when he bumped his head reaching for his ADVENT CALENDAR.

Before his accident Frankie Duke, then two, loved nothing more than jumping in puddles and playing with his friends.

He put a childrens’ chair on top of his Thomas the Tank table to get his hands on two Spiderman chocolate calendars his dad David, 28, had pinned on his bedroom wall.

But the adventurous toddler toppled off and banged his temple causing a bleed on the brain which left him with extensive brain damage.

Brave Frankie battled to learn to talk and eat again but has been left unable to walk due to spasticity in his legs caused by high muscle tone from disrupted brain signals.

This month his parents Rachel Nesbitt, 28 and Dave, a ground worker, have been told his only hope of walking again is a £30,000 operation in America not funded by the NHS.

The family from Fareham, Portsmouth, are faced with a race against time to raise the money before he becomes too old for the operation to have maximum success.

Mum-of-two Rachel, a former teacher said: “To see him walk and jump in puddles and play again would be the best thing ever.

“All the dreams I had for him they are all gone.

“But they could be back if he has this operation. Even if it can help him walk with sticks it would just be the best thing ever.

“This time of year does bring back memories of course.

“We still all really look forward to Christmas – I think because we are just glad to be home and not in hospital.

“But it is bitter sweet.”

Little Frankie had just finished his dinner when his mum Rachel put his Thomas the Tank children’s table and chair set in his bedroom while she did the washing up.

In a matter of seconds he had toddled in and it is thought he stacked the chair on top of the table and climbed up to get his hands on advent calendars pinned to his wall.

Mum Rachel heard a thud and ran in to find the then two-year-old on the floor with a sore temple and comforted him, on November 16 2014.

“I picked him up and he was fine.”

She didn’t suspect anything was seriously wrong but asked her mum, a nurse, to call by the house, and the pair called 111 as a precaution when he unusually asked to go to bed. 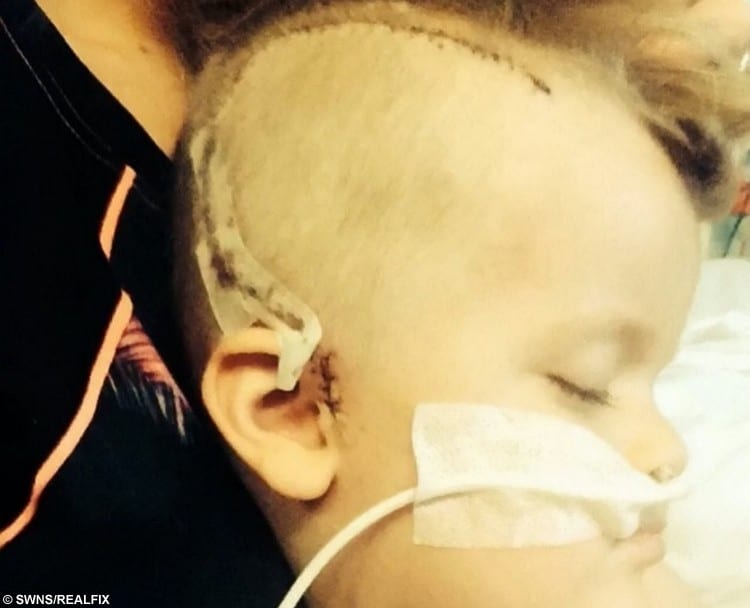 First responders and an ambulance attended, but medics didn’t find anything which worried them.

But just they were leaving little Frankie suffered a seizure and went stiff in his mum’s arms, so was rushed to hospital where he was put on a ventilator.

Recalling the terrifying ordeal, Rachel, who also has a daughter Ella, three months, said: “His eyes rolled to the back of his head and he went stiff.

“I didn’t realise it was life or death until we arrived at the hospital and someone said ‘we are doing everything we can’.

“I was so shocked. I was hysterical.

“We just wanted him to live. As long as he lived we could work through anything else.”

An MRI and a CT scan revealed he had a bleed on the brain and he was airlifted to Southampton General Hospital where surgeons performed a craniotomy to remove it.

Rachel and David were initially told he had just a ten per cent chance of survival after his pupils became unresponsive, but after ten days in a coma he slowly came around.

But the bleed had put pressure on his brain “pushing” parts of it causing damage, Rachel said.

During a five-month stint in hospital he learned to talk and eat again and had intensive physio to help him move his limbs.

But he has been left with spasticity – an tightening or increased muscle tone caused by disrupted signals from the brain.

He is one of very few children in the UK who have the condition after an acquired brian injury, rather than cerebral palsy.

His parents have been told the only cure is selective dorsal rhizotomy – the division of nerves as they enter the spinal cord to free up the constricted muscles.

NHS England does not currently fund SDR surgery and is currently evaluating 120 children who had the operation recently to decide on future funding.

But Rachel said this could take years and Frankie – who needs the operation now to guarantee maximum success – still might not be eligible.

“We have been told if he doesn’t have the SDR he will not walk independently.”

“He was very sporty he loved playing golf with his dad, riding his bike and jumping in puddles and would love the chance to be able to do that again.

“I heard him say the other day ‘I can’t walk at the moment but one day’ and we just want to make that happen for him.”