Mel and Ben Bunting with their son Kobi who died from Edwards syndrome a day after being born. See Ross Parry Copy RPYNOTE: The parents of a baby boy who died just 29 hours after he was born with an incurable genetic condition penned a heartbreaking note - telling him I will always love you. Tragic Kobi Bunting was born with Edwards' syndrome, an incurable genetic decision that means most babies do not survive birth, along with holes in his heart. His parents, Mel and Ben Bunting, were left in complete shock when they were dealt the devastating blow that the newborn would not survive after an uncomplicated pregnancy. Little Kobi spent just 29 short hours with his doting parents before he passed away at Hull Women and Children's Hospital, East Yorks, last month.

The parents of a baby boy who died just 29 hours after he was born with an incurable genetic condition penned a heartbreaking note – telling him “I will always love you.”

Tragic Kobi Bunting was born with Edwards’ syndrome, an incurable genetic decision that means most babies do not survive birth, along with holes in his heart.

His parents, Mel and Ben Bunting, were left in complete shock when they were dealt the devastating blow that the newborn would not survive after an uncomplicated pregnancy.

Dad Ben then took pen to paper and wrote Kobi a letter to let him know “you will always be with us in our hearts and memories and I will love you forever.”

Mel, of Hull, said she is determined to raise awareness of the condition and raise funds for Soft UK, which supports families of children with Edwards’ syndrome.

She said: “I want to do anything I can to make Kobi’s time on this earth a positive thing.

“Raising money is giving me something to focus on. I don’t want any other family to have to go through what we went through.

“I want people to know what Edwards’ syndrome is and I want to raise as much money as possible to help others.”

The majority of babies born with the syndrome die during the fetal stage and those who survive experience serious defects and often die during their first year of life.

Mel said: “Many babies with Edwards’ syndrome are stillborn.

“I feel so proud Kobi was so strong and fought to be here so we got to meet him.

“When he died we knew it was an end to his suffering.

“He was like a little doll. He was perfect.” 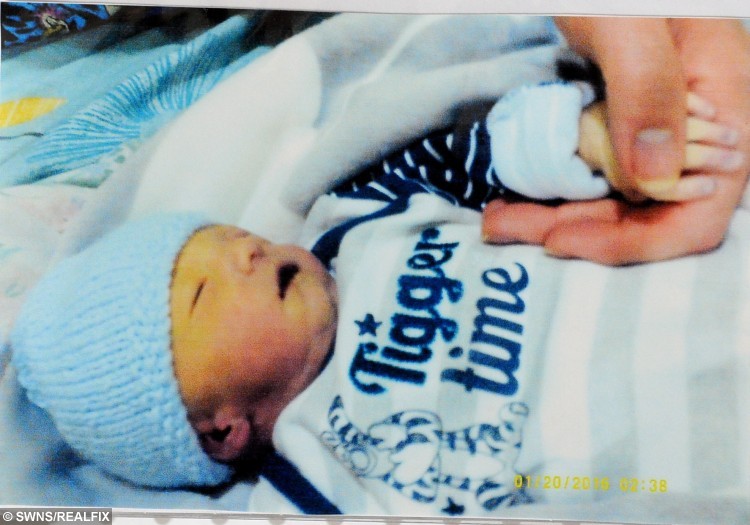 Hull and East Yorkshire Hospitals Trust has launched an investigation, which is a routine procedure following any unexpected neonatal death.

The investigation will mean Mel’s scans from her pregnancy and other related factors are examined but does not imply any fault on hospital staff.

It is possible to detect Edwards’ syndrome in a 20-week fetal anomaly scan but Kobi’s condition went undetected and the investigation find out if anything could have been done differently.

Mel said the family were robbed of the opportunity to prepare themselves for their sons death because they had no idea about his condition.

She said: “If we had known about Kobi’s condition we could have prepared ourselves and our family.

“I wouldn’t have been preparing for a baby to bring home because I would have known he wasn’t going to survive.”

The investigation will also examine why three holes in Kobi’s heart were not detected during her ultrasound scans.

A hole in the heart can be detected via a scan and if they are identified the mother would be sent to fetal cardiology for tests.

“The day I knew you were coming I was the happiest Daddy on earth. And when you came out of Mummys tummy my Love for you was over the moon. My special little guy was here but Daddy couldn’t hold you or kiss you because there were problems and you had to be rushed away to be taken care of. This made Mummy and Daddy very sad because we did not know what was going on.

“We spent a few hours apart (which felt like forever) before we could see you but when we saw you we realised how Poorly you really were. You looked so Small and Fragile, I felt so helpless all I wanted to do was hold you tight and not let you go and make everything better but I couldn’t.

“We were told by some lovely doctors and nurses that you had trouble with your heart and lungs this made Mummy and Daddy really sad. And after a tough night of you fighting you were tired and you felt like you were slipping further away from me.

“Then it came to the time that the medicine wasn’t working and you wasn’t getting better. This was the time we knew we were gonna lose you forever and the nurse made sure that Mummy and Daddy could hold you for the first time and this made Daddy really happy because that’s all I wanted to do.

“Then it was Daddys turn to hold. And when I held you in my arms my Heart was filled with so much Love and Joy. It felt like it was going to explode with so much Happiness.

“And then it was time you had to leave us but you will always be with us in our Hearts and memories and I will always love you forever and always and I want to thank you for the most amazing Cuddle that any Daddy would ever ask for.

“Love you forever and always

Mike Wright, chief nurse at Hull and East Yorkshire Hospitals NHS Trust, said: “The loss of a baby is always very upsetting and we’d like to offer our sincere condolences to Ms Bunting at this time.

“Since the loss of her baby, the trust has followed routine procedures, namely to record the loss as an incident and to review the circumstances surrounding it.”

Meet the youngest female firefighter in the country

Devoted husband does something INCREDIBLE to help his dementia-suffering wife remember him.

Devoted husband does something INCREDIBLE to help his dementia-suffering wife remember him.