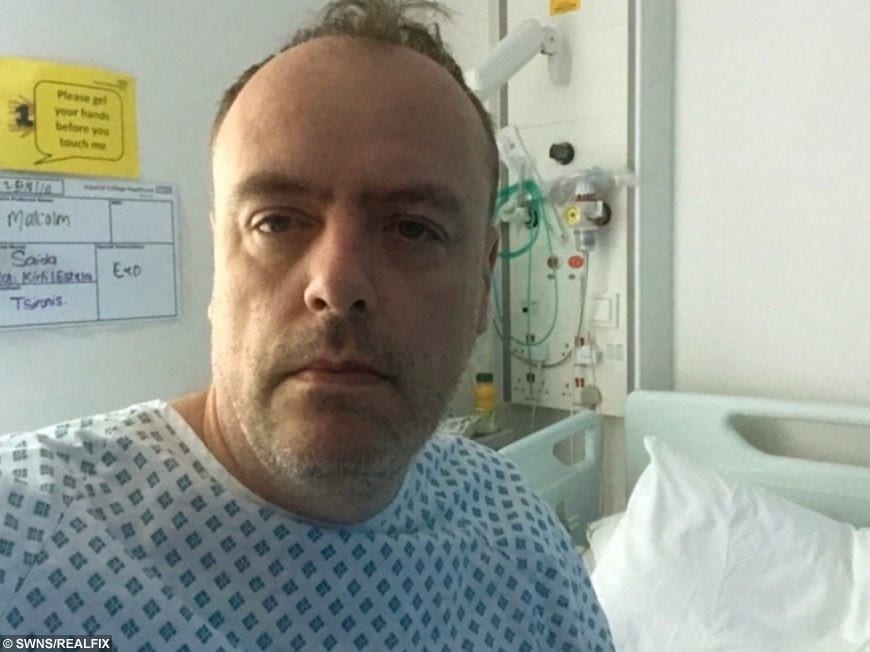 rA lifesaving ambulance worker has been left jobless and depressed after developing a hernia – from lifting too many overweight patients.

Malcolm Conlan, 48, has been forced to appeal to the public to help pay the bills after undergoing an emergency operation which left him unable to do his job and provide for his family.

Malcom, who lives in Bromley, knew about the inguinal hernia for over a year but feared an operation would leave him broke and unemployed.

That nightmare became a reality during an agonising shift on the August bank holiday weekend, when a concerned colleague drove him to A&E after seeing he was in pain.

Surgeons operated immediately to remove the hernia, but Malcolm has been told he can never do any heavy lifting again.

He said: “The last couple of weeks I was working the hernia got bigger and bigger.

“When I went to the toilet, I had to push it in.

“My bowel and bladder had come out through my abdominal wall.

“It could have become an emergency very quickly – if it had become strangulated I could have lost a part of my bowel.”

The hernia was exacerbated, he believes, by the fact that the patients he was hauling have gotten fatter since he started the job four years ago.

Malcolm said: “I shouldn’t use the word fat, but there’s no doubt that people have been getting bigger. It’s a national problem.

“If someone who weighs 25 stone is having a heart attack you have to pick them up and carry them – whether you like it or not.

“You do your best but it can be really hard at times. You want to help these people, so you have to give it a go and try to lift them.

“But when you have to get them out of bed or take them home it puts extra strain on me.”

The desperate dad, who has never been out of work for this long, is now living off £94 per week of Statutory Sick Pay – which he is entitled to for 28 weeks.

He is in constant pain, and said his mental health has deteriorated as a result.

He said: “It has affected me badly. I love going to work and love my job, but I can’t do it anymore. To be honest I am finding myself to be very depressed.”

His wife, already juggles two jobs and the couple support Malcolm’s mum, who has cancer, as well as their 21-year-old autistic son.

He said: “I’m completely stranded. Breadwinner is an old-fashioned term, but I can’t contribute to bills any longer.

“It’s only been a week and I have already built up some rent arrears.”

Malcolm was inspired to take up his £350 a week job with Harley Street Ambulance Service, a private company, after saving three lives as an emergency first aid responder at the London Eye.

He was hired after successfully campaigning for a defibrillator to be kept at the popular tourist attraction.

Malcolm, who also has a 23-year-old daughter, holds no ill will towards his employers for the situation he now finds himself in, adding that he was “stupid” not to have an operation sooner.

He does not know how his family will be able to cope financially and, in a desperate attempt to pay his bills has been forced to start a GoFundMe page – which has already raised nearly £800.

Malcolm is devastated that he will not be able to go back to doing the job that he loves.

He added: “I love the job with a passion.

“I absolutely love helping people and talking to them, reassuring them.

“I can never do the job again in my life, and that’s really hard to cope with.

“I just don’t know what to do. I feel utterly useless.”