Man cuts own toes off to save his leg!

A man who had an operation cancelled at the last minute literally took matters into his own hands and amputated his TOES – with a pair of PLIERS.

Desperate Paul Dibbins, 57, had been due to have his leg removed below the knee after suffering serious frost bite on his feet while repairing a car in freezing conditions.

But the surgery was called off by the NHS and fed up dad-of-three Paul decided to tend the condition himself at home.

He spent months trying to heal his toes but six months later a doctor told him he had killer gangrene and they would have to be removed.

But he claims he was then told he would have to wait six weeks for an operation and Paul decided to cut off the troubled toes himself.

The former army Lance Corporal used some military training – and no painkillers – and he scraped off the dead flesh around the two toes on his right foot.

Paul, a film restorer and archivist, then cut through the tendon in his living room- which took around an hour.

He claims he even won praise for his handy work by a surgeon – who said he was ”mad’ but his work was “textbook”.

Paul, of Buckfastleigh, Devon. said: “Knowing that it would take at least another six weeks to get me in front of a surgeon again that’s when I bit the bullet and cut off the toes.

“I did it because it’s what had to be done, my doctor told me my toes were going to kill me.

“I’ve had one surgeon say to me it was more luck than judgement but then I had another surgeon saying I was mad but it was textbook.”

Paul suffered frostbite after spending three hours fixing a blown head gasket to his son’s car during “cutting winds” in the driveway of his hilltop home on March 16, 2015.

His feet “soot black” and he was rushed into Torbay Hospital the same day and doctors told him because of complications with his diabetes they would need to amputate his right leg from the knee down.

But after being wheeled to theatre doctors pulled the plug at the last minute because of complications to another patient’s surgery who had been seen before him.

Devastated Dibbins then discharged himself from hospital hours later and thought doctors would call him in a few days to rebook an appointment – but claims they never did.

Paul said: “They would have cut my leg off. When I went in, my doctor and two surgeons all said prepare yourself for the worst we are taking your leg.

“I had a breakdown, bearing in mind I’d had frostbite, I had been taken to hospital in an ambulance,

”I’d been told my leg would be cut off and I was taken into surgery but it was cancelled. I just wanted to go home and see my wife and kids.”

Paul then resorted to treating his own wounds over nine months, using a Swiss army knife, sterile scissors and homemade dressing, which he did twice a day.

He said: “Taking care of myself I could see myself getting better. I could see the more work i did the better it healed.

“I took six painkillers in the first week and then none for nine months. I didn’t want to die and didn’t want my leg cut off.

”What I have always wanted to do was live in the English Countryside, it was all I wanted out of life and if I lost my leg it would have been difficult to stay.” 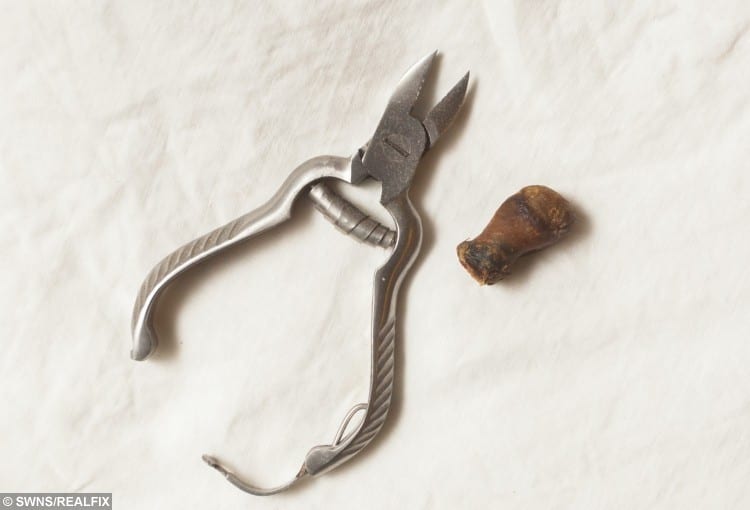 Paul claims he saw doctors every six weeks after and was told he could carry on treating his frostbite until “things turned nasty”.

And it looked like he had beaten the frostbite until his right foot became infected with gas gangrene in November 2015.

But the determined former army Lance Corporal, who is medically trained, instead took matters into his own hands after being told he would need to wait weeks for an appointment.

The following evening Paul then used scissors to crunch through the gristle while biting into a wrapped towel to hide the pain, which he described as feeling like a “car wreck”.

Paul’s wife of 40 years Elaine, 57, said: “There have been ups and downs and it’s been quite a journey.

“I could not be in the room while he did it but I knew that he had to do it to save his foot, his leg and life at the end of the day.

“I could see where he was coming from although it was traumatic and emotional.

“We have been together since we were 16 years ago and he has always been a survivor.”

WATCH: Dad captured wildlife that took over his kids’ playground – and the results were astonishing

Have you been on the spirits? My dead dad was captured haunting his local!

I make miniature real-life sets – for my HAMSTER!