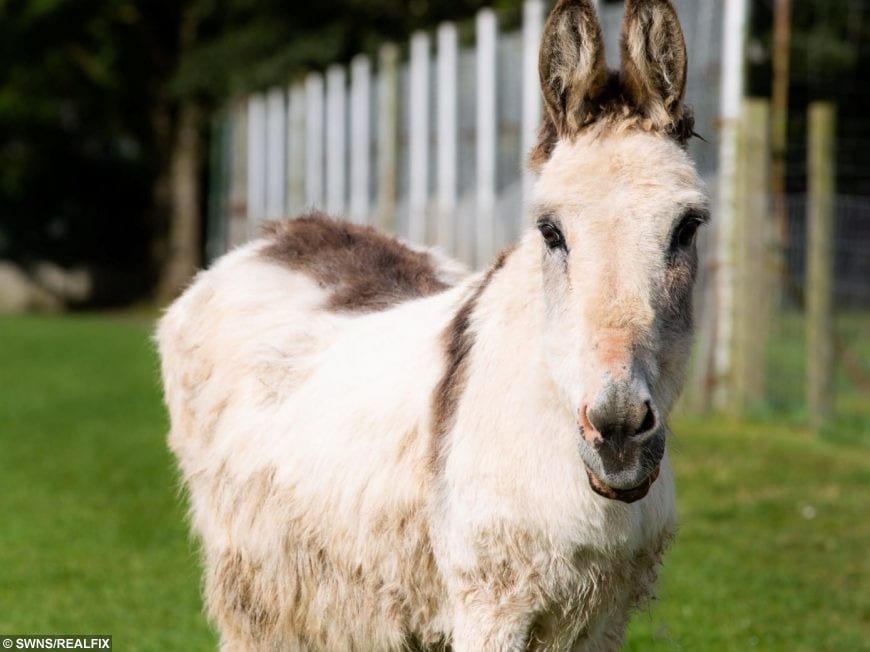 These pictures show Britain’s oldest DONKEY – who has lived TWICE as long expected.

Pepper was born in the late 1960s and is still thriving on the farm where she has lived for 35 years.

Her exact date of birth is unknown as her arrival pre-dates animal documents – but carers say she is at least 50.

Elderly Pepper, who has had two foals of her own, is double the age of an average donkey.

She has lost most of her teeth with age, meaning her tongue usually hangs out of her mouth.

But the well-loved donkey enjoys a daily grooming at Dairyland Farm Park in Newquay, Cornwall, where she has lived since 1984.

Elderly Pepper even still manages to walk herself to the field and back most days.

A member of the team at Dairyland said: “Every day we’re amazed at Pepper’s stamina.

“It’s hard to believe that when she was born it was the swinging sixties.

“But it turns out she’s definitely in her 50s, which makes her one of, if not the, oldest donkey in the country.”

According to the Guinness World Records, the oldest donkey in the world, named Suzy, was from America and lived to the age of 54.

The Dairyland spokesperson added: “When Pepper arrived at Dairyland, she didn’t have a passport because they weren’t even a thing when she was born.

“We’ve always known she was very old, but we asked our vet if she could age Pepper so we could be more accurate.

“If our vet’s prediction is accurate, we believe Pepper could be the oldest donkey in the UK, ever.

“It’s very unusual for a donkey to reach 50 and we think the secret to her long life is individual care and an enriching environment.”

Pepper had a difficult start in life, having been mistreated before arriving at Dairyland – meaning she was “feral” before she arrived, and struggled with human interaction.

The spokesperson said: “You couldn’t even go within a mile of her when she first came to Dairyland as a result of her poor treatment, but it wasn’t long before she settled in.

“Pepper’s lifespan has exceeded all expectations, outliving many of her peers.

“She’s completely different now to how she was when she arrived all those years ago – she absolutely loves children and attention.

“She has lost most of her teeth, so her tongue sticks out sometimes, but that makes her even more endearing,” they added.

The average lifespan for donkeys is 25 to 30 years.