Meet the real life festive miracle – the premature baby home in time for Christmas after spending her whole life in hospital where she fought for her life three times.

Parents Vicky Russell, 27, and Scott Daly, 30, were first told she likely wouldn’t make it, due to her tiny underdeveloped lungs. 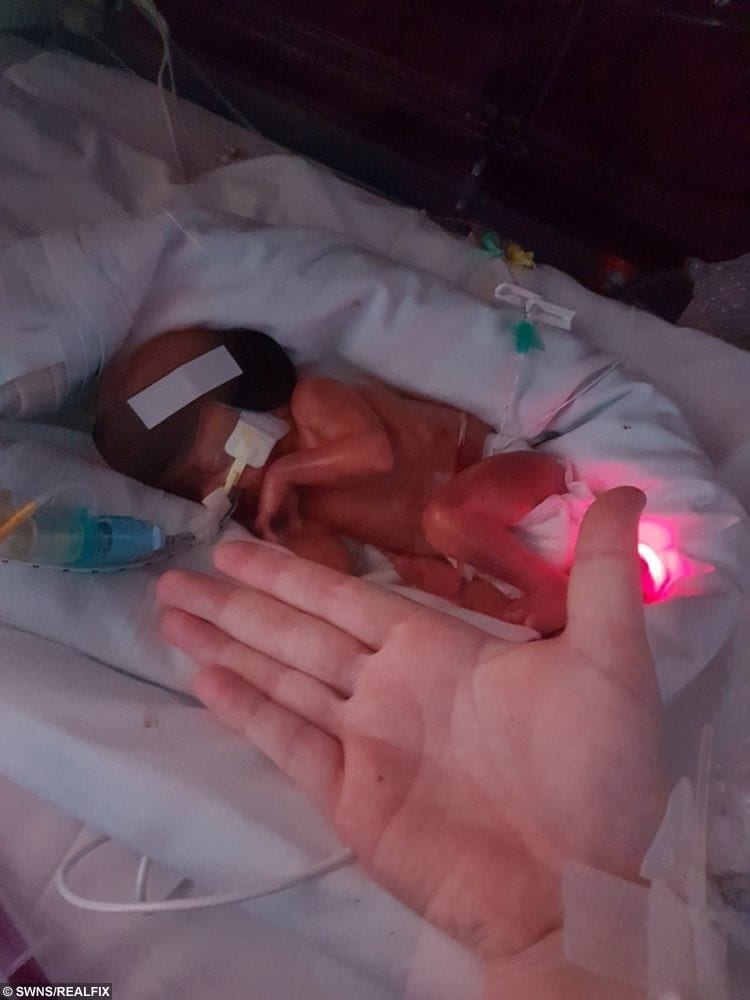 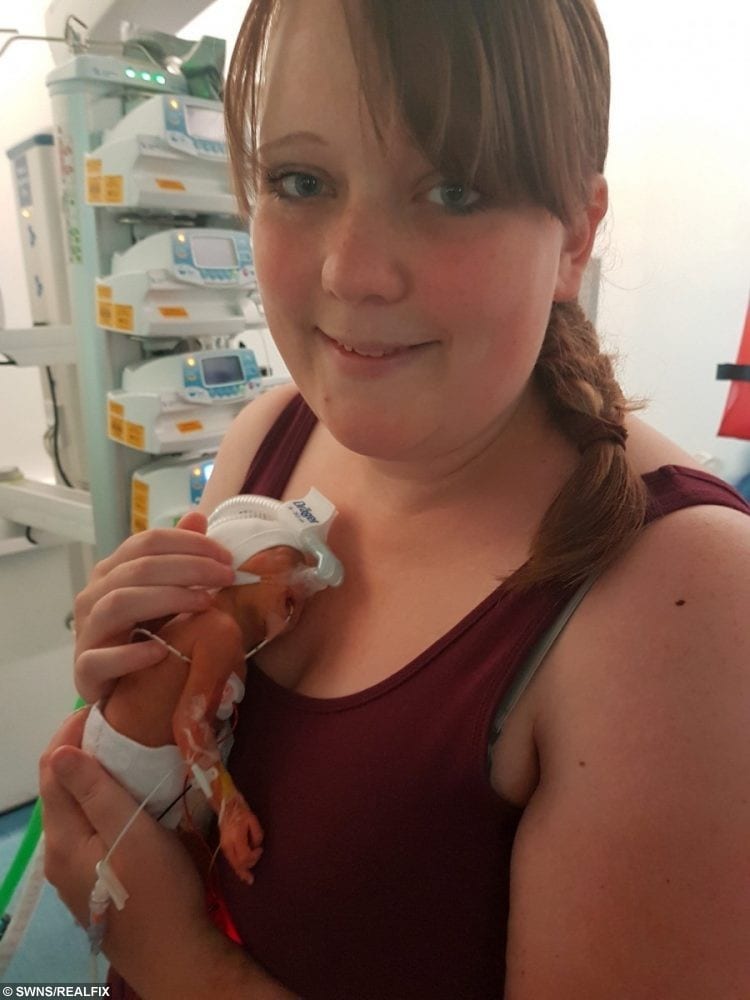 She fought to survive, enduring 11 blood transfusions, but her early arrival meant some of her digestive organs then started to die.

She pulled through again, and was well enough for a repair operation, but she contracted sepsis, forcing her to stay in hospital for an 115-day stretch.

But little Layla – who was born smaller than her dad’s hand – is finally home and the family are preparing for their first Christmas. 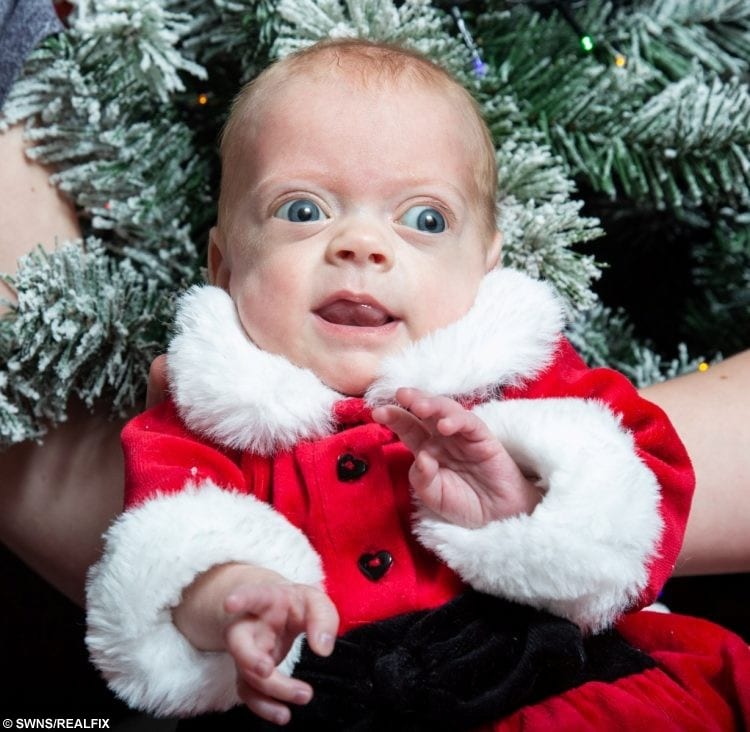 Vicky, a former retail assistant, from Melksham, Wiltshire: “There have been so many times where we’ve been told that our little girl wasn’t going to make it, so we feel incredibly lucky that she’s here with us.

“And to be able to bring her home in time for her first Christmas is just magical.

“It’s like all our Christmases have come at once.

“We are so happy and can’t wait for our first family Christmas.

“We were told we would be very lucky to be home for Christmas because of how poorly she was and the repeat step backs, so we are even more grateful.” 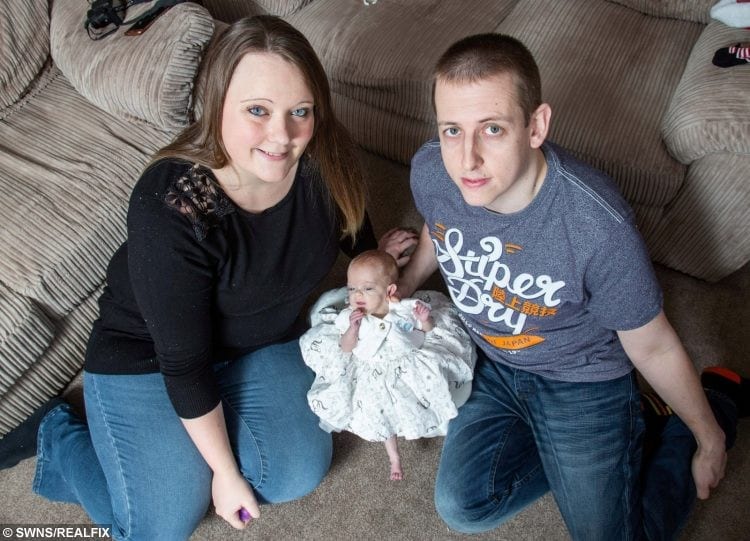 Vicky and Scott had always wanted a family, but worried they might not be able to have children because she had lupus.

She said her rheumatologist advised she should be in remission for at least six months to have the healthiest of pregnancy.

Vicky said: “It took four long years for the disease to be in remission.

“We were then given the go ahead to start trying for a baby and in just three short weeks I fell pregnant.

“I was extremely excited when I saw two lines appear on the test but the excitement then turned to nerves as I knew there was a lot of risks and possible complications to carrying a child when you have lupus.” 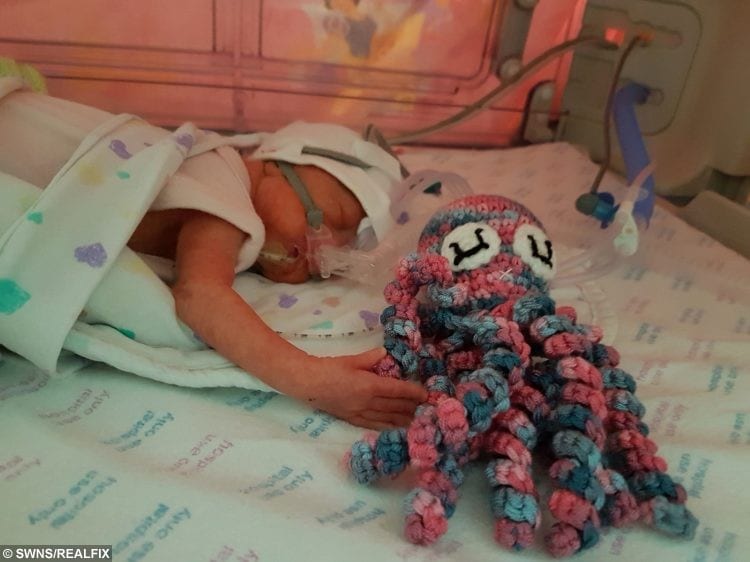 But Vicky’s pregnancy was fair from smooth-sailing.

She said: “From seven weeks pregnant I in and out of hospital and was diagnosed with hyperemesis gravidarum (severe morning sickness).

“I had such bad sickness, I couldn’t keep anything down this required a few hospital admissions.

“As I got to 12 weeks it subsided and I felt a lot better and even started to glow. I started to get a bump at around 16 weeks.”

At a 16-week scan, the couple discovered they were having a little girl, but their joy was short-lived when just two weeks later we were told there was a problem with their unborn daughter.

Vicky said: “At my 18 week scan they spotted calcifications – specks – on our baby’s liver.

“We were referred to fetal medicine at St Michael’s Hospital in Bristol.

“They did repeat scans and then sat us down and said that they thought these calcifications were significant.

“They talked about the possibility of our daughter having CMV, Down Syndrome, cystic fibrosis or cabin damage.

“To say we where distraught is an understatement.

“They talked about termination, but I was then 21 weeks pregnant. I didn’t want that option. But I still had to think about it as I didn’t want her to suffer all her life.” 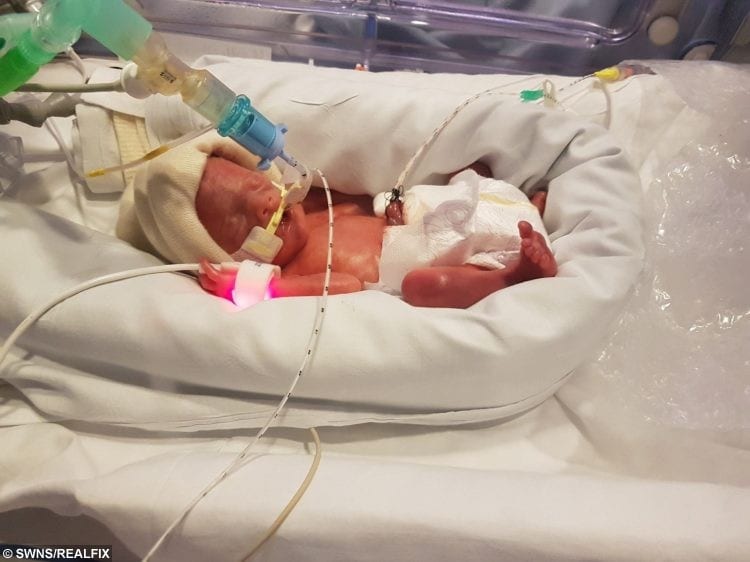 Vicky was booked in for a follow up scan four weeks later and just two weeks after that her waters spontaneously broke.

She said: “I was sent to the Royal United Hospital (RUH) in Bath.

“After a quick scan to confirm my waters had indeed gone I was blue lighted by ambulance to Southmead Hospital in Bristol.

“At the time I was 24 weeks pregnant and RUH didn’t deal with babies that small.

“At Southmead they gave me magnesium and steroids to help babies lungs and medication to stop my labour.

“This worked I stayed in Southmead for a week and a half on antibiotic drip as the risk of infection was high because there was no waters.”

Vicky was sent home, but she woke up with extreme stomach pain and started throwing up. 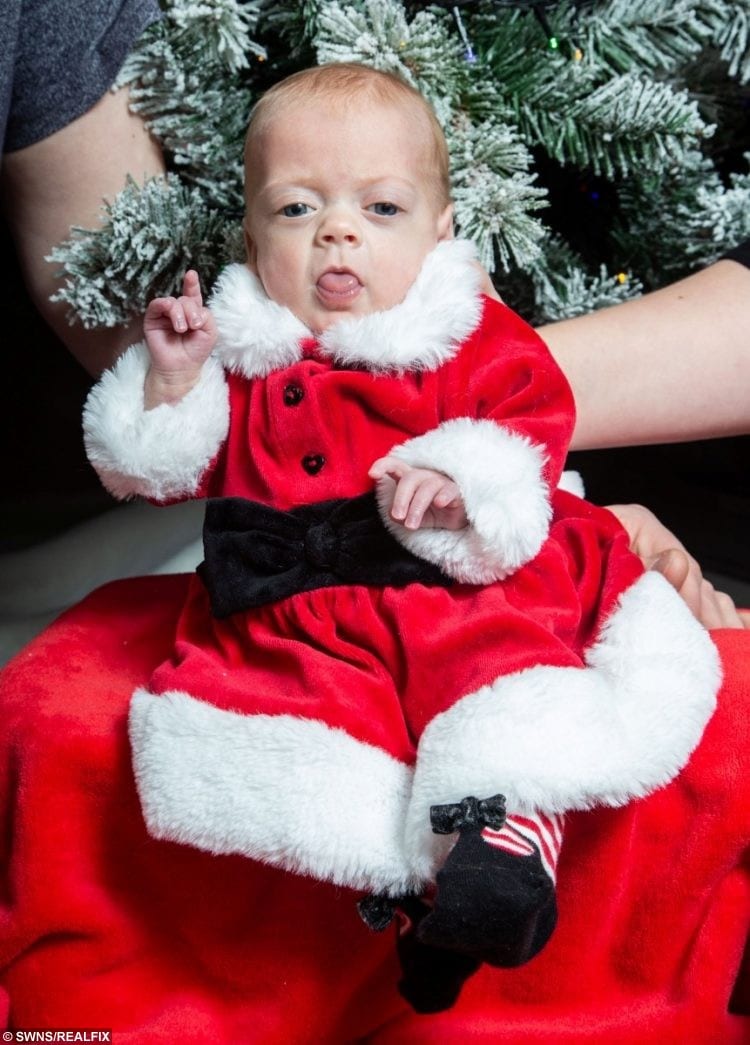 She said: “My partner called an ambulance and was blue lighted to St Michael’s Hospital, where I spent five hours on deliver suite.

“With no progression I was sent up to the ward to be monitored.

“Within three hours the doctor had results from blood tests and said I had a severe infection and that the baby needed to come out within four hours. That’s when my world fell apart.

“It was a total shock. I was expecting to go home not to theatre to have my baby taken out at just 26 weeks.

“But I was told I’d had a spontaneous rupture of the membranes – they don’t know what caused it.

“I then contracted a severe infection in my womb and there was no waters protecting the baby so needed to take her out.

“They talked through all the risk and the percentage of her surviving and before I knew It I was on a operating table.”

Layla was born at 26 weeks at 5.35pm on July 28. She weighed a tiny 1lb 9oz and doctors said she was so undeveloped, she might not survive.

Vicky said: “She was delivered by an emergency c-section as her life was at risk from the infection.

“My partner, Scott, was there every step of the way. He was so supportive I couldn’t have done it without him.

“He was in theatre with me holding my hand and reassuring me she was going to be OK.

“I wasn’t allowed to see Layla for five hours while they stabilised her.

“When I saw her I was able to reach in and touch her, but I was very scared.

“I have never felt so much love in my life until I laid my eyes on my miracle daughter.

“Layla was ventilated straight after her birth as her lungs needed times to mature.

“I knew it was early days, but I just knew she was a fighter.

“I expected her to look a little alien like, but she just looked like a normal baby that had been hit by a shrink ray. I had never seen a baby so small.

“I wasn’t allowed to hold her until she was five days old as she was to unstable and fragile.” 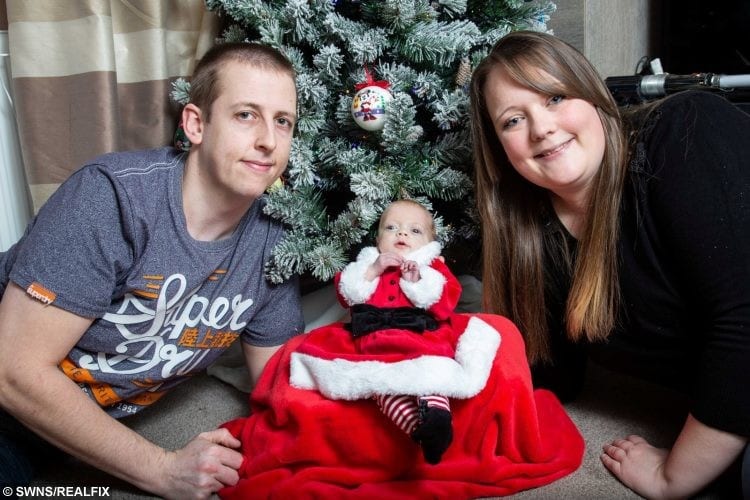 At three weeks old, Layla contracted a life-threatening infection necrotising enterocolitis (NEC) which caused part of her bowel to die.

She underwent emergency surgery and had 10cm of her bowel removed and a stoma formed to help her gut heal.

After seven weeks in recovery, Layla had her stoma reversed and her intestines put back together – whilst battling deadly infection sepsis.

Layla – who was smaller than her dad’s hand – defied all the odds and has been discharged and allowed back to the family home in time for the festivities.

Little Layla spent a total of 115 days in hospital, but she was discharged on November 21.

Vicky said: “I was so excited to have her home but at the same time petrified as for the last three months she had been hooked up to monitors.

“I was scared I wouldn’t know if she was OK without them.

“After a long time in hospital you sort of rely on the monitors to tell you when there is something wrong with your baby. You get used to them, so I was a bit freaked out when she didn’t have them. But I’ve calmed down a lot now and I just need to trust my instincts.

“We plan to have a quiet family Christmas – just the three of us and our dog.

“We plan on starting a family tradition and going for a nice walk every Christmas morning.”