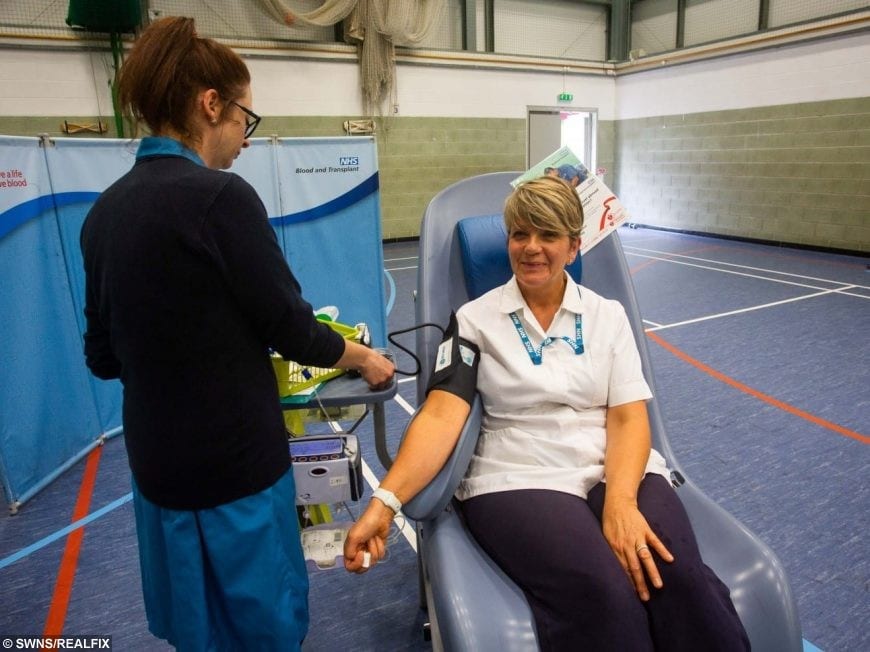 Meet the woman who has saved countless lives – because she has the rarest BLOOD type in Britain – and is its ONLY donor.

Sue Olds, 52, has the incredibly rare blood-type -D- and is the only donor of her kind registered with the NHS.

There are only 110 people in the world with the blood type – and 88 of those live in Japan.

It makes Sue’s 46 donations so far especially valuable to the NHS – who have used it to save many lives including a baby.

They also take her blood to freeze for future use when anyone else with -D- are in need.

The NHS Blood and Transplant say if she continues to donate during her lifetime she’ll have saved or improved a HUNDRED lives.

Sue, a support from Penzance, Cornwall, said she will continue donating as often as possible.

She said: “I had a phone call back in 2004 to say I had a rare type of blood but other than that not a lot of information came forward.

“Then earlier this year the NHS called me and told me the facts and figures, it’s a bit overwhelming.

“I started donating blood in 1994 when I would go down with a group from work, we thought it was a good thing to do.

“Ladies can donate every 16 weeks, I’ve travelled a bit and you can’t donate after visiting certain countries but now I’m back in Cornwall and back on track.”

Sue’s blood type, -D-, is a variant of the Rhesus blood group system, which means her donations can be given to patients with almost any Rh related types.

While the NHS has donors of other rare blood types, such as McLeod and Hy-, her unique trait sets Sue apart and so she is determined to donate as often as possible.

She continued: “As soon as I’ve finished I’ll be on the telephone booking my next appointment.

“It’s just one hour of your day ever four months, it’s nothing.

“I know it will benefit people who have been in RTAs, or people who are giving birth for example.

“It’s something I would encourage everyone to do.”

An NHS Blood and Transplant spokesman said her blood has “saved or improved” the lives of dozens of people.

They said if Sue “keeps donating three times a year for life, that’s around 100 lives saved or improved.”

They added: “What’s crucial is that for some of those patients, Sue will have been the only donor who could help them.

“No other blood that we have could have been used. For patients with the same type, Sue is our only current donor who can help them.

“No-one else’s blood could be given to some recipients without the risk of a potentially fatal transfusion reaction.”

They added: ”We can’t say how many people in Britain have her blood type, given how rare the type is.

”Basically, so few people have it, it’s hard to get a precise estimate of prevalence.

“But given only 110 known donors in the world have it, and only 30 people outside of Japan, you’d probably be talking a handful, but we don’t know.”

Sue’s donations could be used for cancer sufferers and chemotherapy patients, people who have suffered traumatic accidents, and for premature babies.

Back in 2017, two units were issued to a baby, one day after the other, and if it weren’t for Sue’s donations the patient may not have survived.

Sue continued: “It’s a virtually painless procedure, and over the years I’ve got to know the team that come down to Penzance.

“They are a friendly bunch, I give blood and have a bit of a natter and a catch up with them.

“Some of my blood has gone on to save a baby’s life. It’s overwhelming, it’s very emotional.

“Life is very precious, I think whether it’s saving a baby’s life of a pensioner’s, it makes no difference.

“It’s such a small thing that you can do but it’s massive for the family of the person you save.”

“This can be particularly important in the case of very rare blood types – some types are almost only found in people from certain ethnic backgrounds.

“Our very rare donors like Sue are invaluable and we’re so grateful that she donates. If someone with a very rare blood type falls ill, there may be only a handful of donors in the whole country who can help them, or even just one.

You can make an appointment to donate blood at www.blood.co.uk