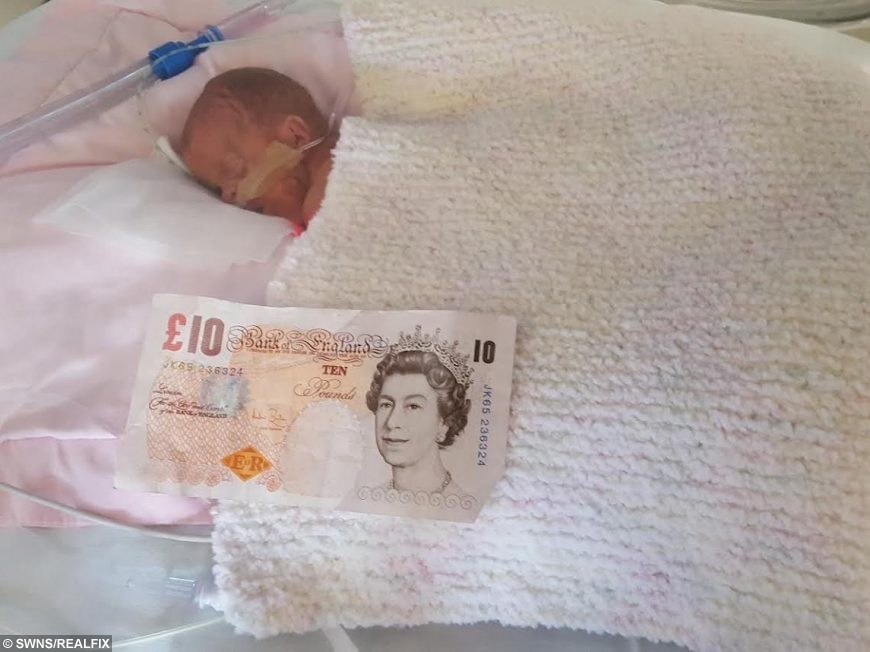 A woman went into premature labour at just 23 weeks – just ten days after she found out she was pregnant.

Zoe Ambrose, 30, gave birth to little Paige 17 weeks early, but after months of fighting, the little girl pulled through and is now thriving.

Zoe was rushed to hospital by her partner Arnie Fowler when she went into labour, and after begging medics for help, because they did not think the child would survive, she gave birth to tiny Paige, who weighed just 1lb 5oz and was given a 25 per cent chance of survival.

Smaller than a £10 note, the tot spent months fighting for her life, defying medics’ expectations.

Twenty months on, Paige is now enjoying life at home like any other tot her age. 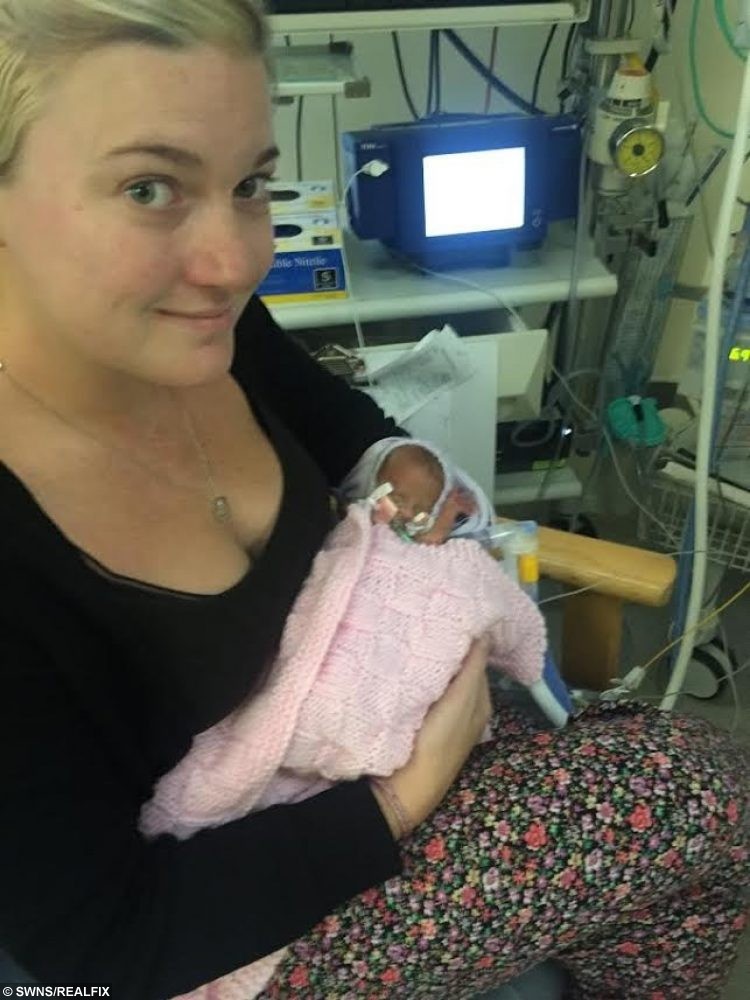 Travel agent Zoe, of Greenhithe, Kent, says: “It really was a miracle.

“I’d been in labour for an hour before a doctor told me they didn’t legally have to save my baby because she was going to be born before 24 weeks.

“I felt so helpless. I couldn’t let my little girl die without a fight.

“I begged them to do everything they could to save her life and in the end they agreed.

“I sat by her every day, willing her to pull though. And now I have her home, we couldn’t be prouder of our amazing little girl.” 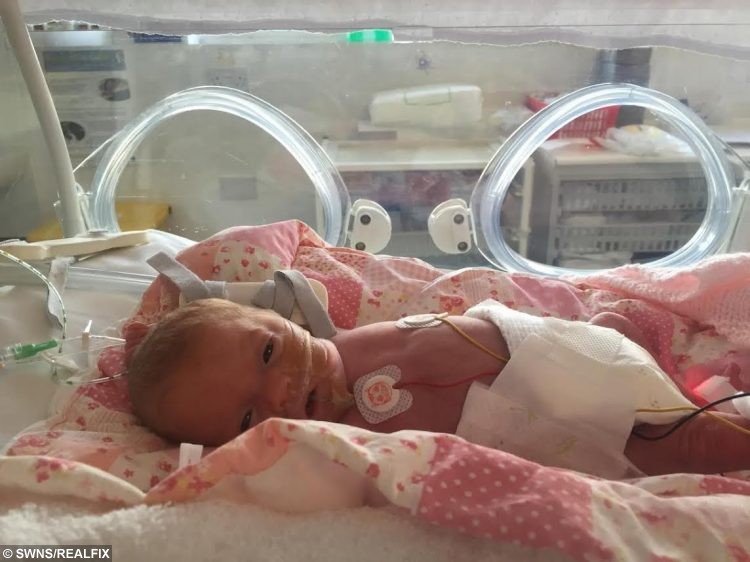 Talking of her surprise pregnancy, Zoe said: “I wasn’t showing and there were no signs. I was on the Pill but my periods were often irregular.

“It was only when I moved house and visited my new GP that I found out I was pregnant. I was shocked.”

She was even more stunned to discover she was 22 weeks gone.

Zoe says: “It was crazy. I was still a size 12 and hadn’t had any morning sickness or cravings. I was totally unprepared.”

She and her electrician partner Arnie, 25, began buying things for their baby ahead of their due date on November 27, 2015, but in August Zoe began to bleed at work, and Arnie rushed her to hospital. 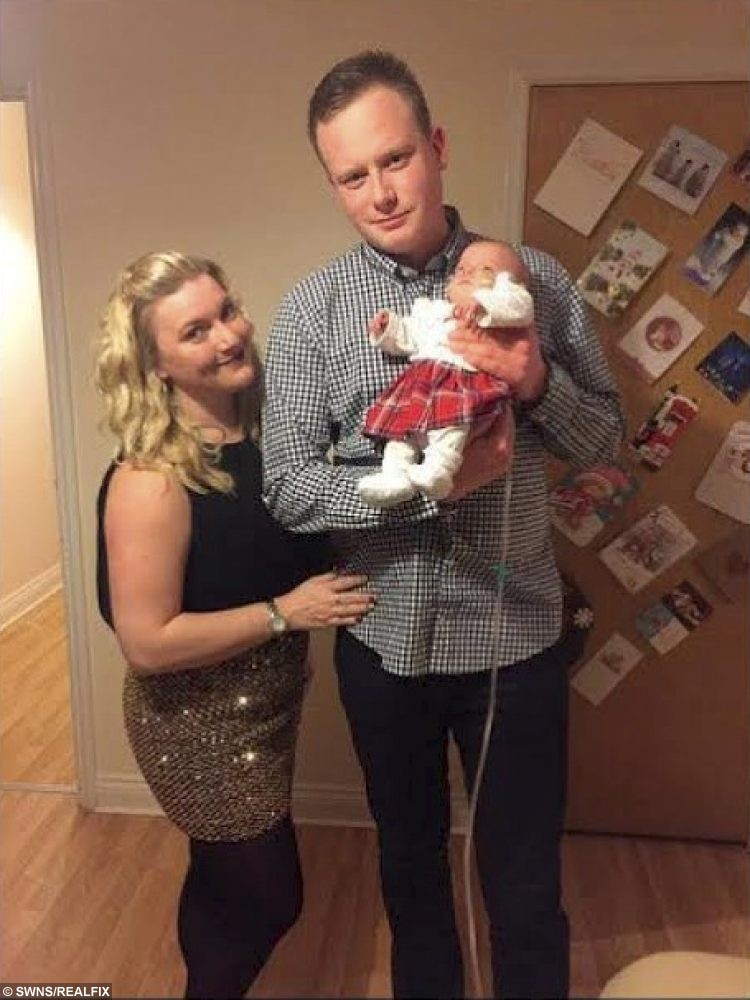 A paediatrician told Zoe the legal abortion limit was 24 weeks and the hospital would not try to save her baby but would relieve any suffering.

She said: “He told me my baby only had a 25 per cent chance of survival.

“I remember him saying that unless she comes out trying to breathe, they would not resuscitate her. I burst into tears and begged him to do something.”

According to NHS guidelines, at 23 weeks there is a high level of uncertainty about the outcome for a baby.

Lifesaving treatment is offered only if parents ask for it and the paediatrician feels it is appropriate. 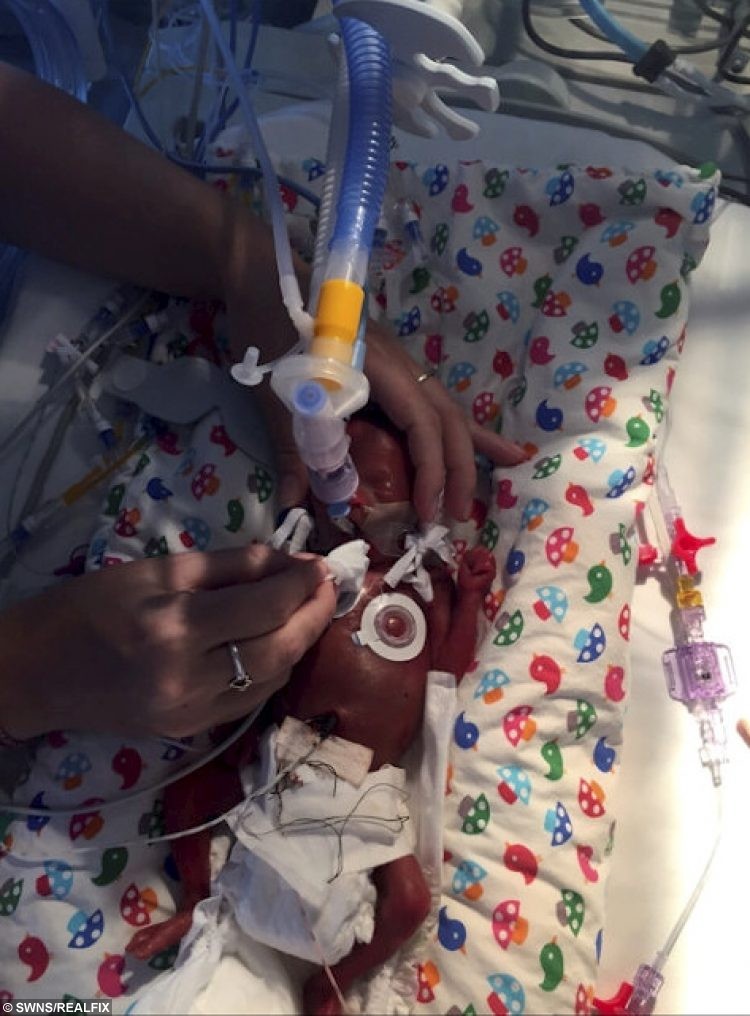 After a seven-hour labour, 1lb 5oz Paige was born at Darent Valley Hospital in Dartford, in August 2015.

Zoe says: “I was so worried she wouldn’t survive. I prepared for the worst.

“She was so small, doctors didn’t even know her sex. I had to give birth in a bag to keep her warm.” 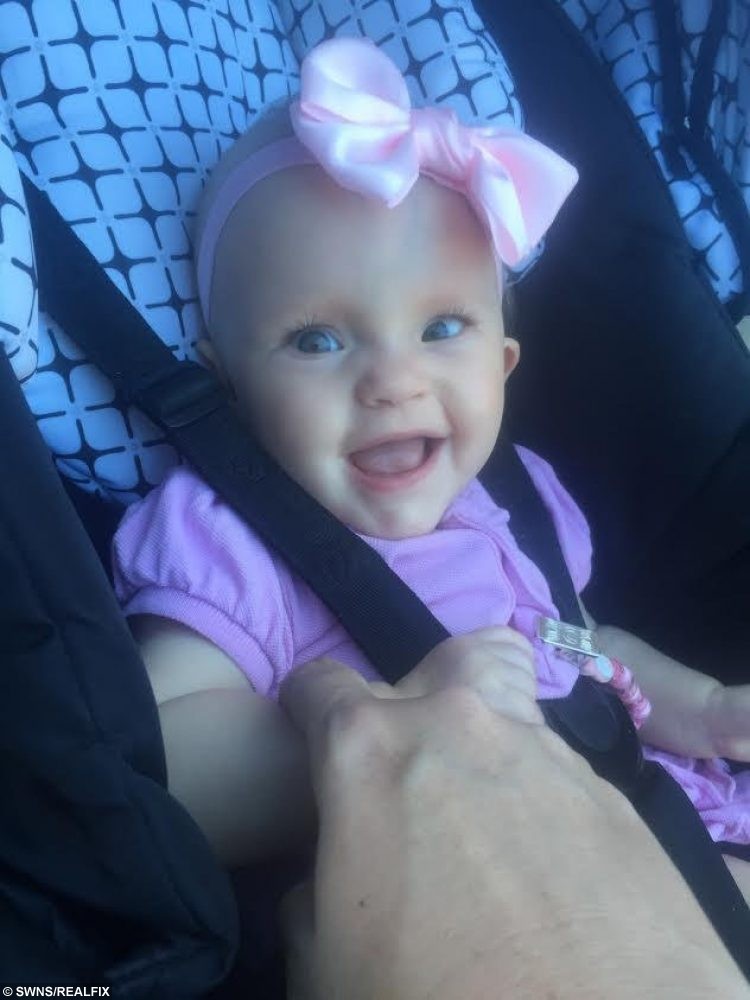 Paige is now enjoying life at home like any other tot her age.

Paige was transferred to Gillingham’s Medway Hospital for specialist care and she spent more than four months being moved between different hospitals, including Medway, King’s College, Great Ormond Street and Darent Valley.

In her first few days she had a haemorrhage in her lungs and a bleed on the brain. She was diagnosed as partially sighted in one eye and, at just three weeks old, had to undergo stomach surgery. 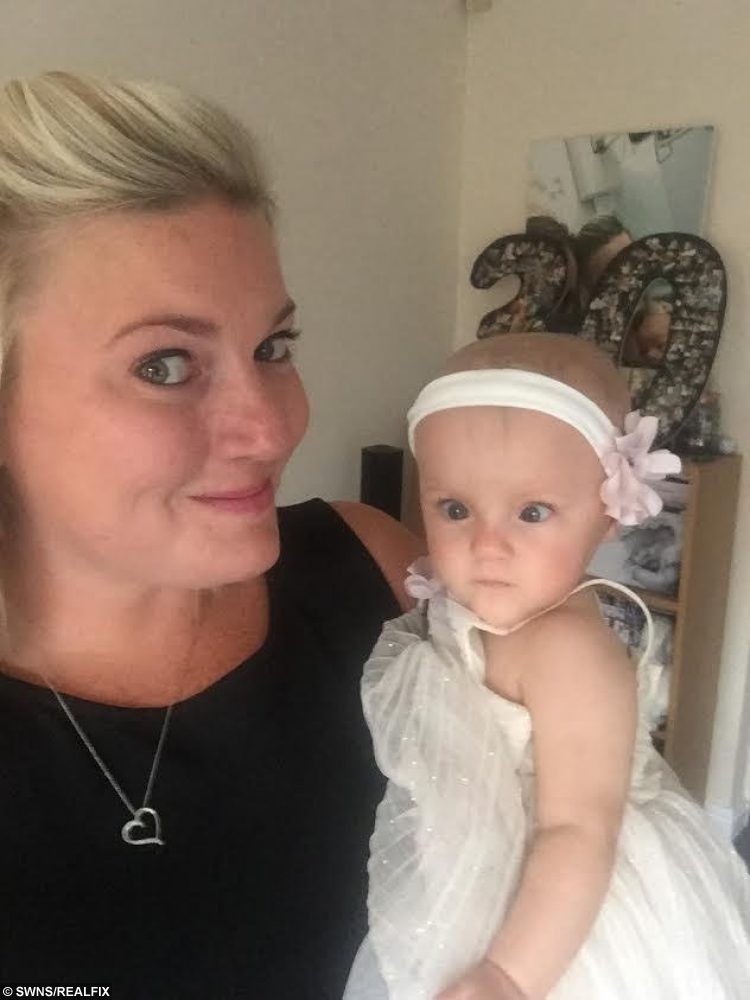 But Paige continued to fight and, incredibly, was discharged on December 16, 2015.

The tot, below, still needs daily hormone treatment and has an underactive thyroid but she is regularly checked over by doctors. 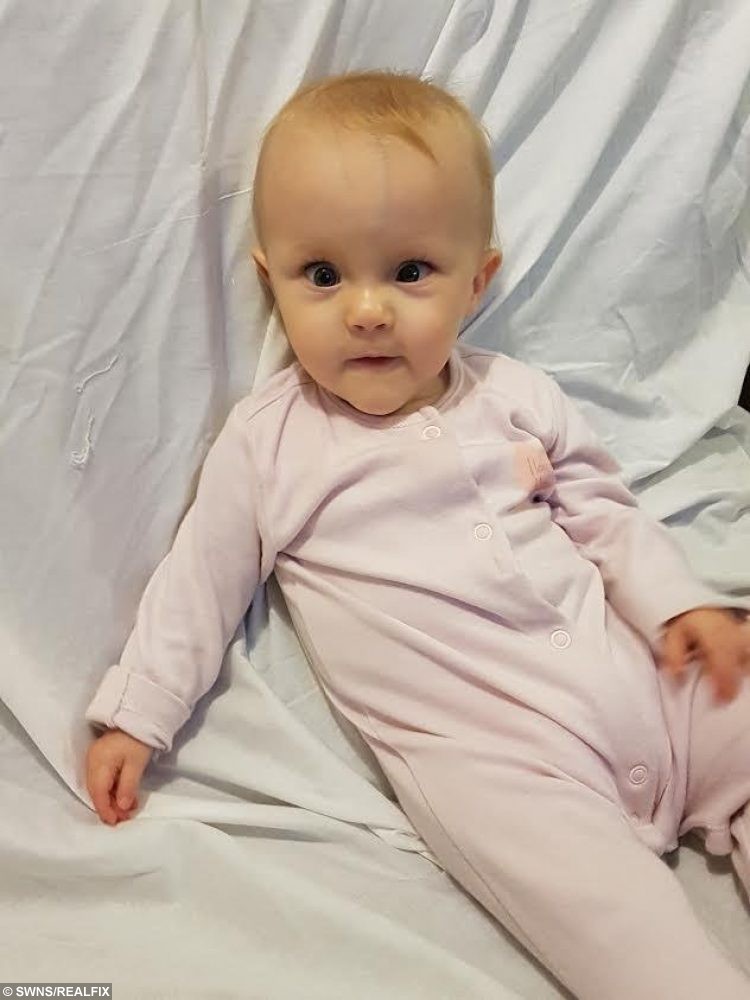 Zoe says: “Paige will always suffer with diabetes and tests for her eyes are ongoing, but she is expected to live a long and full life.

“She is everything to us and the thought that when I first saw her she was as tiny as a £10 note still amazes me.

“This year she is off the oxygen.

“We didn’t know that Paige was coming, but now she’s here we are so grateful for our little miracle.”