A "miracle" baby was born while his mother was being treated with chemotherapy for breast cancer.

A “miracle” baby was born while his mother was being treated with chemotherapy for breast cancer.

Songul Yildiz was diagnosed with cancer in 2016 after discovering a lump in her right breast.

But just days before she was due to have a mastectomy, the 42-year-old discovered she was five weeks pregnant with her daughter, Bahar – who is now a year old.

As part of her treatment, Songul had six sessions of chemotherapy which began in the 15th week of her pregnancy.

Bahar was delivered safely by caesarean at 38 weeks in March 2017.

Three weeks after the birth, Songul had surgery to remove lymph nodes in her right underarm.

In June last year she had radiotherapy to remove the remaining cancer cells and is now in remission.

She moved from Scotland to London to be closer to her sister and was referred to Guy’s and St Thomas’ where she received treatment.

Songul, who lives in Finchley, north London, and also has a six-year-old daughter, used to work as an administrator for the NHS.

Songul described Bahar as “my little miracle” after doctors managed to treat her cancer while she was pregnant.

She said: “Being told I was pregnant while being treated for breast cancer was completely devastating.

“But the team at Guy’s and St Thomas’ was very reassuring and told me it was possible to effectively treat my cancer during my pregnancy with chemotherapy.

“Throughout the treatment I suffered from sickness and extreme fatigue.

“Some days I found it impossible to walk around and on a number of occasions I was so exhausted I had to be admitted to hospital. It was really overwhelming.

“But the care I received at Guy’s and St Thomas’ was amazing. I was able to have complementary therapies alongside my medical treatment, such as regular massages, which really helped me to cope.

“The maternity team were very attentive and kept a very close eye on me and the baby. I couldn’t have asked for better care.

“Holding Bahar for the first time was such a special moment. She developed meningitis soon after her birth but thankfully made a full recovery.

“I’m eternally grateful for every at Guy’s and St Thomas’ who made her birth possible. She’s my little miracle.” 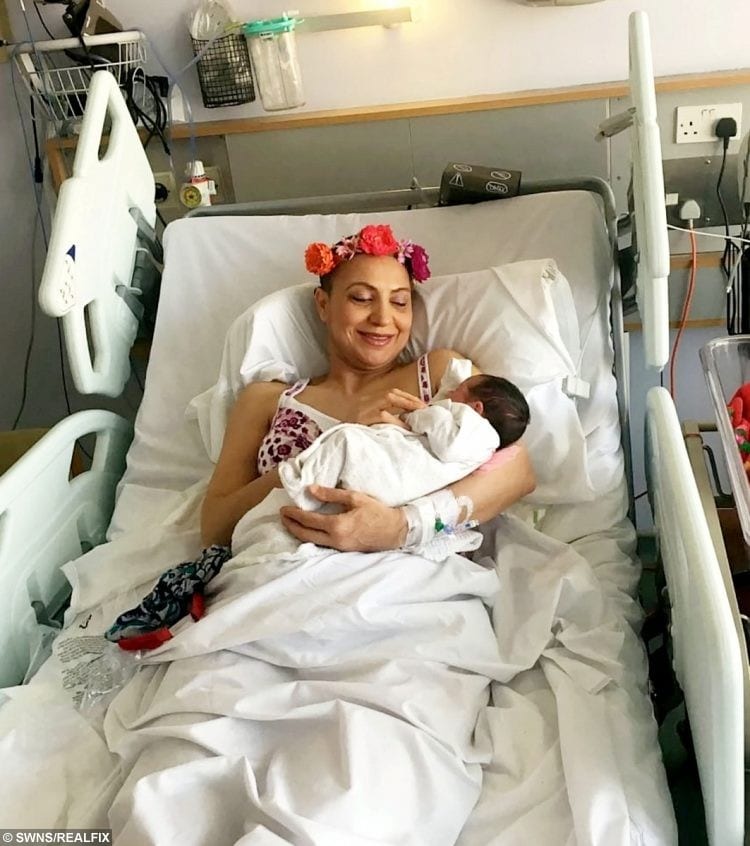 Breast cancer is the most common cancer affecting women. It it is more likely to occur in women aged over 50 with more than 70 per cent of women with breast cancer surviving after treatment.

Dr Anne Rigg, clinical director for oncology at Guy’s and St Thomas’, said: “I’m absolutely delighted that Songul is in remission and her daughter is healthy and doing well.

“Breast cancer in pregnancy is thankfully very rare. The treatment we provide is dependent on the stage of the pregnancy and the type of cancer, but it’s definitely possible to have a healthy pregnancy and healthy baby while undergoing treatment.

“The cancer team worked very closely with the Trust’s maternity team to ensure that Songul and her baby received the best care possible.”

Now in its fourth year, the annual event celebrates those who survive cancer and the teams from the hospital who have treated them.

Describing her reasons for taking part in the show, she added: “I would never normally do something like this, but I wanted to show that cancer doesn’t have to hold you back.”

As well as a fashion show, live music, seminars and exhibits, Cancer Survivors’ Day also includes a Celebration Walk to raise money for the Cancer Centre at Guy’s.

ONE OF A KIND: Fundraising Campaign Launched For Only Girl In The World With Rare And Unknown Neurological Condition

Owner Is Reunited With Cat Ten Years After It Went Missing

Owner Is Reunited With Cat Ten Years After It Went Missing