A miracle baby who was the first in Britain to have pioneering spinal surgery while INSIDE the womb has delighted her family with her progress and ability to WALK.

Little Frankie Lavis, who has spina bifida, was operated on during the 24th week of pregnancy, a fortnight short of the time limit for such a precarious procedure.

It was touch and go whether she would survive and her parents were told Frankie would still spend life in a wheelchair.

But now aged two, Frankie has returned to her local hospital to meet the medical team who helped her astonishing start in life.

Her parents Gina, 37, and Dan Lavis, 39, say her recovery vindicates their decision to pursue the risky treatment which was carried out at a specialist centre in Belgium.

It involved covering part of the baby’s spinal cord and to reach it the surgeon had to cut through Gina’s abdomen, uterus and into the amniotic sac that held the baby.

The Frankie’s back was then brought out of the sac, but she remained face down in the fluid, which was continuously topped up throughout the operation.

Two years on, Frankie has now surpassed all expectations to be able to walk with a frame better than her parents ever imagined.

Gina, from Plymouth, Devon, said: “No-one else in the UK had this operation before us so it was a big step.

“But we firmly believed that the best thing was to give her the best start and that is what it is.

“There is a lot of risk but look what we have now. Just look at her now. It is amazing”

The family discovered the ‘severe’ fault in the development of Frankie’s spinal cord and surrounding bones which left a split in the spine at the 19-week scan.

The couple – who also have sons Harry, 18, and Alfie, nine – were told they could terminate the pregnancy or attempt to correct the fault after Frankie was born.

After researching the condition Gina and Dan found out about fetal spina bifida repair before birth, although it was surgery not done in the UK.

They decided the in-utero operation would give their baby a better chance of reduced disability than having it after birth, which is the norm for babies with spina bifida.

The surgery was carried out by Professor Jan Deprest in Belguim, who leads one of only four centres in Europe that performs the operation.

It was approved by NHS European Cross Border Funding agency within 30 minutes of the request being made and Gina and Dan paid their own travel and accommodation.

Gina added: “At the time it was a difficult decision. We came in hoping to find out if we were having a boy or a girl but were told she had a major disability.

“We know that she’s the first baby in the UK to have the surgery and we also know that there are many more babies who could qualify for the surgery but it’s not being offered as an option at the moment. 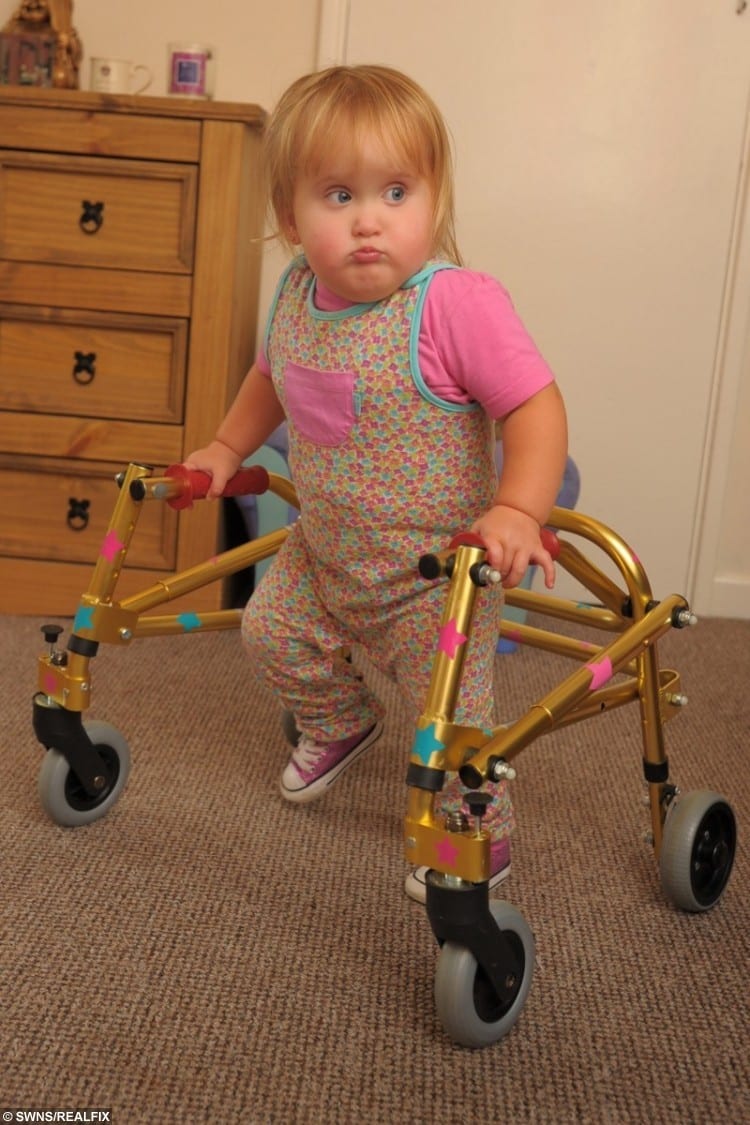 Frankie was this week taken back to Derriford Hospital in Plymouth so staff who care for her could see how she was getting on.

The tot’s former consultant Dr Ross Welch said he was astonished at her progress.

He added: “The change is really quite remarkable knowing the diagnosis when we first made it for Frankie.

“The outcome we predicted was she would never be independently mobile and would be in a wheelchair.

“And to see her as she is now – walking and doing what any other child would do is astonishing.”

Man jailed for having over 100,000 indecent images of children

Man jailed for having over 100,000 indecent images of children