A bank manager with a £150k addiction to McDonald’s shed over half her body weight after kicking her junk food habit.

Morbidly obese Marci Gordon, 37, piled on the pounds in her teens and ballooned to 23.5 stone (331lbs) after having her two children.

The mortgage processor – cruelly nicknamed “marshmallow man” – would head to McDonald’s on the way to work.

She would order two sausage McMuffins, hash browns and a large soda to start the day before gorging on candy bars, donuts and potato chips.

For lunch she’d head back to McDonald’s and have a Big Mac, two cheeseburgers, large fries and a coke – spending over £150 a week in the fast food joint for 18 YEARS.

In the evenings, her favourite hobby was binging on Law and Order and watching programs about the world’s fattest people while tucking into friend chicken.

Despite doctors saying her overeating would kill her, ambitious Marci, of Tampa, Florida, never managed to stick to a diet.

It was only when her son Kordae, eight,came home from school and said kids were picking on him because she was fat that she slimmed down.

Within six months she shed 100lbs and she’s since slimmed down to 169lbs, dropping ten dress sizes from a size 24 to a size eight – and even been promoted at work.

Marci, who lives with husband Quinton, 37, Kordae and her other son Kobe, three, said: “I hated the way I looked.

“I used to look at other people and think, ‘I wish I could look like that.’ I didn’t feel feminine or beautiful.

“People would stare and I couldn’t even fit into the office chair. I thought, ‘I’ll be fat forever. This is how I’m meant to be.’

“It was only when I realised it was affecting my kids that I realised enough was enough.

“The thought of my little boy having to defend me broke my heart.

“We have a very close relationship and I wanted him to be proud of me, not having kids bullying him and telling him his mom is fat.

“He said he had told them that I wasn’t fat and that I had a baby in my belly and I had to tell him I had given birth one-and-a-half years ago.

“He asked me why I was fat and I didn’t have an answer. He said, ‘Do you think you could wake up tomorrow and not be fat?’

“The look on his face made me feel that I had disappointed him. I was devastated.

“I cried all night and when I woke up the next morning everything changed.”

For dinner she would eat fried chicken and bread or tuck into pasta, meatballs or hot dogs for dinner, with brownies or cupcakes for dessert.

She would also raid the work vending machine or stop at gas stations through the day to buy candy bars and potato chips.

But on July 5 2015, Marci’s revelation that he was being bullied over his mum’s weight changed her outlook.

Marci researched diet plans and overhauled her lifestyle overnight, opting for fruit and veg instead of fried, fatty snacks and switching soda for glasses of water.

She cut her calorie intake from 8,000 a day to 1,500 and started exercising – going for walks around the block until she could run, and later started going to the gym.

Now she eats lean chicken, salad and home-cooked dinners and works out every day and has cut out all high-sugar treats and junk food.

Marci said: “The first two weeks were super hard, but after that it got easier. My body was in shock – I was living a completely different life.

“After a few months I started wearing skirts and dresses and people were telling me how great I looked.

“The best thing was that my son used to try and fit his arms around me and it made me sad that he couldn’t reach.

“When he was finally able to, after about six months, he gave me a hug and said, ‘Mommy, I can fit my arms all the way round.’

“I cried so much. It was an incredible moment.” 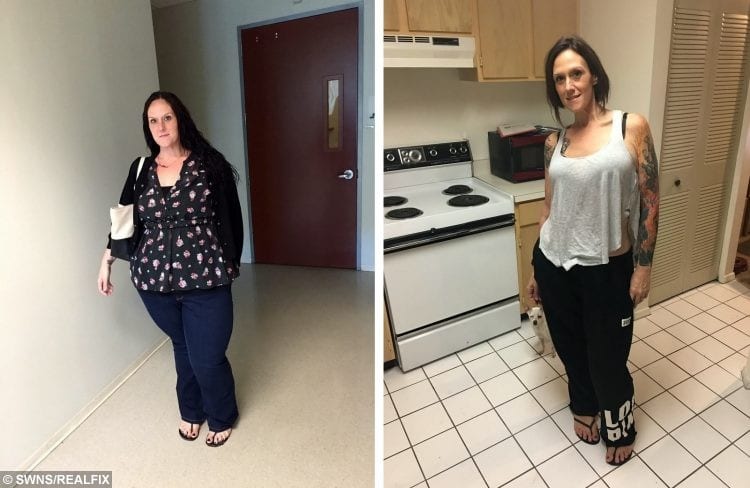 She added: “Before losing the weight I felt hopeless and I didn’t realise how unhappy I was.

“Now I walk down the street and I’m confident and my sons are proud of me.

“I enjoy hiking and playing with my kids instead of watching TV, though I still watch Law and Order.

“I can look in the mirror and feel feminine. I feel amazing.”