Zoe Burlton and her son Harry, 6, who eats mattresses, carpets and wallpaper. Little Harry Burlton is quite literally eating his mother out of house and home - by munching his way through carpets, wallpaper and even his BED. See SWNS story SWCARPET. Zoe Burlton, 24, has been forced to buy new flooring for her living room because Harry, six, has an obsession with tearing things into little pieces and eating them. The autistic youngster rips wallpaper down, peels paint from the walls and pulls mattresses apart. Now his mum is fundraising to build him a 'safespace' with soft surfaces that so tough he cannot tear them up.

Little Harry Burlton is quite literally eating his mother out of house and home – by munching his way through carpets, wallpaper and even his BED.

Zoe Burlton, 24, has been forced to buy new flooring for her living room because Harry, six, has an obsession with tearing things into little pieces and eating them.

The autistic youngster rips wallpaper down, peels paint from the walls and pulls mattresses apart.

Now his mum is fundraising to build him a ‘safespace’ with soft surfaces that so tough he cannot tear them up.

Zoe, of Paulton, Somerset, said: “We moved into this house about a year and a half ago and as soon as the carpets were down he started pulling them apart.

“We had to put nails in the carpets to stop him.

“But he has still managed to rip it apart. He finds little threads on it that he pulls up and then he eats chunks. He properly eats and swallows them down.

“We have to get a new one now. I can’t even just laminate the floor because he has picked bits off of my mum’s laminate and made holes wherever the lines join up.”

“We used to have wallpaper but he peeled it. After we took all of that off the wall he started going for the paint on the skirting boards.

“He picked little bits off and ate them. There are quite large patches of paint missing.

“He doesn’t eat food much but he eats everything else.”

Harry has a developmental age of one, cannot communicate at all and has no understanding of what he does.

He has no interest in children’s toys but fiddles with wires, plugs and other hazardous items.

Harry was born ‘normal’ but Zoe noticed something was wrong when he reached ten months and could not sit up.

He was diagnosed with autism six months ago and has recently learnt to walk, but uses a wheelchair for long distances and cannot speak at all.

As well as having a fascination with carpets, wallpaper and paint, Harry also tears into mattresses, duvets and anything else he can get his hands on.

“He managed to rip up a mattress once,” said Zoe. “I was in bed and when I checked on him he was still asleep.

“He must have woken up at some point because when I went to check him later there were loads of bits of mattress everywhere.

“He had bits all over his face so I could tell he had eaten some. He got ill after that for a couple of days.

“He also ripped up a brand new quilt yesterday. I went up to check on him and he had all the fluff out of it and it looked like it had been snowing.

“If he has something to rip up he will. He just likes to turn stuff into tiny bits so he can run it through his fingers.

“Even just taking him out in the garden is difficult. I have to watch anything he picks up because he eats the grass, mud and little stones.

“He can eat things just fine but he can’t tell me when he is unwell, he just cries and I have to take him to the doctor because I don’t know what’s wrong. It worries me.”

Zoe is redecorating at the moment in the hope of making the house safer, and aims to provide her son with a ‘safespace’ – a padded room within a room.

The safespace will be made of soft, blue padded walls that Harry will not be able to tear or hurt himself on if he throws his body at them when he is upset.

Zoe is a full-time carer for Harry and her daughter Eva, two , who is also being investigated for autism. She has raised £900 towards her £8,000 target so far.

“All of it means that Harry will be safe at night. No matter how long it takes to raise this money, this safespace is for the rest of his life,” she said. 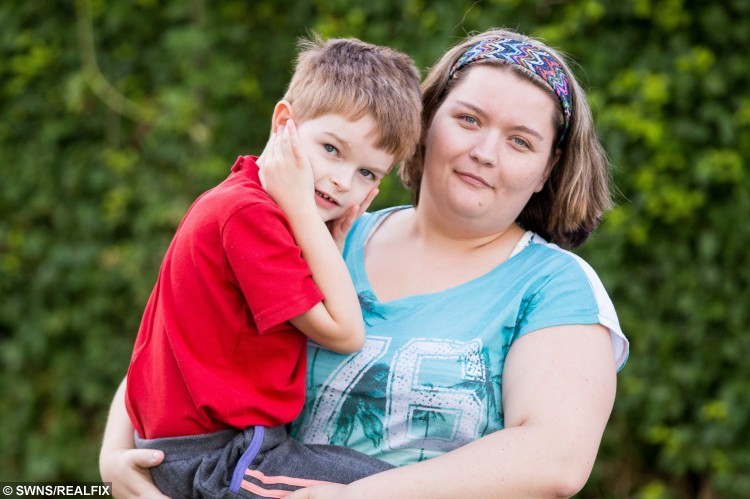 “He just needs to be safe. I never know what he is going to eat or do.

“When he is upset he can be a danger to himself because he rocks and cries and throws himself to the floor, so this would stop him from being able to hurt himself.

“He also wakes up in the night and it would be so reassuring to know that when he does wake up he is completely safe.

“It will be such a safer and comfier place for him to sleep and it will also mean more sleep for me.”

To help Zoe raise £8,000 to pay for Harry’s safespace, visit their Go Fund Me page

The ice bucket challenge with a totally unexpected outcome…