Mum gets £200,000 payout after hospital blunder left her with flesh eating disease which destroyed her womb

A young mum who is unable to have more kids after losing her womb due to a medical blunder has received £200,000 in damages.

Natasha Richardson, 26, was giving birth to her first child naturally, when doctors decided she needed a Caesarean because there were problems with his heartbeat.

And despite Noah arriving on January 9 2013 as a lively, healthy 6lbs 2oz, 26-year-old, Natasha was left in a terrible condition which was to wreck her life.

Unbeknown to her, or doctors, surgeons had accidentally cut Natasha while they were performing the operation.

Because they were not aware of their error Natasha was stitched up while she was suffering internal bleeding.

Doctors soon realised what had happened as Natasha was in severe pain, and she was transferred to intensive care and operated on.

But their failure to administer antibiotics after the C-section meant she developed a severe flesh eating bug.

The doctor’s receptionist was sent home five days after the second operation and she put her extreme weakness, fatigue and pain down to giving birth.

But it was when Natasha, from Harrogate, North Yorks., was rushed back to Leeds General Infirmary, where she had given birth, 10 days later in agony that they realised she had developed rare skin eating bacterial infection, necrotising fasciitis.

This devastating bug had eaten away at Natasha’s womb and surrounding stomach muscles and tissue.

She was transferred to St James’s University Hospital, where they performed a hysterectomy.

Over the following months Natasha had a further six operations to remove all of the bacteria, leaving her with a massive open wound in her stomach and very little stomach muscles.

She had to remain in hospital attached to a vacuum machine to help her open wound heal.

Natasha, who has been continually supported by her partner and Noah’s dad, car salesman, Jamie Walker, 26, still suffers the consequences of that blunder, almost four years later.

“When I was in hospital Noah wasn’t allowed to see me at all for the first two weeks for fear I could catch an infection.

“I couldn’t breastfeed and I missed my baby.

“In the end they moved me to a side room on my own so my family could bring him in to see me because I started to feel depressed, even then I couldn’t hold him properly.

“I was very poorly.

“I am pleased that the hospital have acknowledged what they did wrong but to think that all I needed was antibiotics is heartbreaking.

“I can’t believe what I have been through for them missing something so simple.”

Luckily Natasha does have a lot of family support but she is sad that Noah may never have a brother and sister.

“It was always our intention to have three children,” said Natasha. “And now that will not happen.

“We have thought that we could have surrogacy because they didn’t remove my ovaries and so they can use my eggs, but that is still a big thing for me to get my head round and already Noah is almost four.

“We would like to think we might have already had another child by now, we didn’t want such a big age gap.

“Even if we started the process for surrogacy we wouldn’t have another baby for a couple of years.

“It is sad to think about what we could have had.

“And I’ve only just started to think about this, in the early days I could only think about healing.”

Still Natasha’s agony continues as she has developed a hernia and has terrible scars.

The scar on her stomach measures an astonishing 30cm x 10cm.

“All of this affects how I feel and what I can wear.

“I only work two days a week now, we decided Jamie ought to work longer so I could work less and make up for precious time with Noah.

“Thankfully, Noah and I are very close. We do have a lot of support so he didn’t miss out on love and attention, but it still saddens me that I missed that time.

“But I can’t do normal things with him. I haven’t got any stomach muscles so that effects what I can do and I certainly can’t pick him up.

“If he jumps on me it is very painful.

“I can’t go anywhere alone with him, I need help so I can have someone to carry him. But he knows that I can’t carry him.”

Natasha now faces a mammoth operation in which surgeons with conduct three procedures to repair the hernia, reconstruct her stomach and to perform plastic surgery.

Natasha said: “I can have the operation any time but the thought of surgery scares me. And then I have to pick the right time. When is the right time to put myself through all that healing again?

“Especially when I have a young child and I will need more time off work.”

But in the meantime she and Jamie are getting married in May next year.

Natasha said: “I do have a long way to go but I am thankful that I have a lot of love around me, and we have a wonderful child.”

During the investigation into Natasha’s care Leeds Teaching Hospitals NHS Trust admitted Natasha should have been prescribed with antibiotics within an hour of the initial Caesarean operation and that had this been done she would not have developed the infection and the extensive surgery she underwent and the hysterectomy operation would have been avoided. 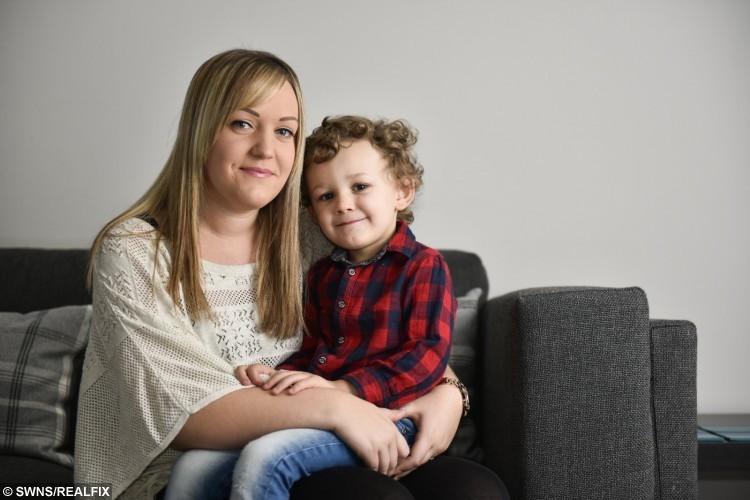 Rebecca Pearey, an expert medical negligence lawyer at Irwin Mitchell’s Leeds office, who represents Natasha, said: “The failures to prescribe antibiotics at the crucial time have clearly had a massive and devastating impact on Natasha as she has had to rethink the plans she had for her family and her working life.

“Natasha has undergone a number of invasive and complex surgeries to correct the problems caused by the failure to administer antibiotics following her C-section.

“Understandably, the prospect of surrogacy in the future, rather than conceiving children naturally, has caused a great deal of stress and anxiety for Natasha and Jamie.

“Natasha was in a great deal of pain for some time after each of the operations she has been through and the ordeal has also had a psychological impact on her and her family.

“The Trust has admitted liability for the problems Natasha has faced, which has come as a relief to her, but she is also keen to ensure the Trust learns from this incident and puts steps in place so that this doesn’t happen to anybody else.”

Leeds Teaching Hospitals Trust has been contacted for comment.