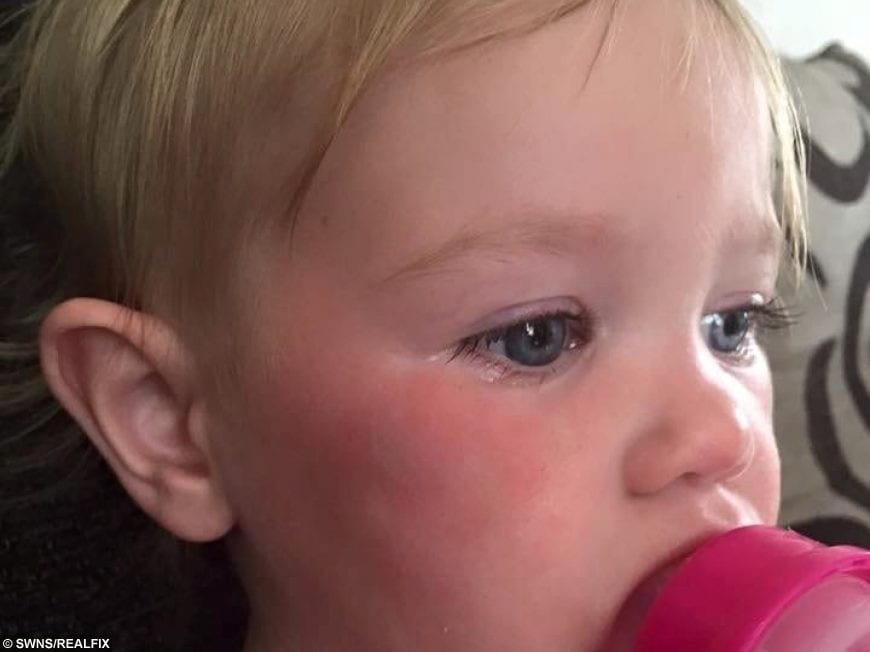 A mum has revealed how a flock of seagulls attacked her two-year-old daughter – just days after they KILLED her dog.

Terrified Emily Vincent says her family were left traumatised after Yorkshire Terrier Roo was savaged by a gull in the back garden.

The beloved pet suffered a head wound and brain damage after the attack believed to have been caused by the birds protecting a nest.

But Emily has now revealed that just days later the attack, her two-year-old daughter Jessie was also targeted by the same deadly gull gang and left with facial injuries.

She believes her injuries would have been much more serious or even fatal had she not been there to fight the gull off.

And she has now spoken out for the first time over the terrifying ordeal in support for the family of Gizmo, a chihuahua believed to have been kidnapped and killed by a gull two weeks ago in Paignton, Devon, and said she can’t believe it has happened again.

Mum-of-four Emily, 40, of St Columb Minor, Cornwall, said: “I was horrified to hear the recent story in the papers about the poor dog that was allegedly taken by a seagull.

“Two weeks after they killed my dog they went for my two year old daughter, thank god I was there and managed to hit it but it still hit her in the side of her face causing bruising to her face.

“She was just outside enjoying the garden not threatening a nest or it’s young that was on our roof.

“Something needs to be done sooner rather than later before something worse happens and one kills somebody.

“It shouldn’t have to take that before something is done but that’s what I feel is going to happen.

“I didn’t share this story of my daughter as we got hounded after Roo but wanted to now as I don’t want one to hurt a child or adult.”

Emily said her family are still traumatised by the death of eight-year-old Roo who was rushed to the vet but had to be put down after failing to respond to treatment.

The attack was witnessed by her son Jace, then three, who came running into the kitchen covered in blood.

At the time she described it as ‘like a murder scene’ and says she fears unless action is taken to control them a children will die as a result.

She added: “My thoughts are with Gizmo’s owner as I know first hand how it feels to loose a beloved pet to a seagull.

“At least I had closure and could bury my dog whereas they don’t and it must be so difficult for them to be going through this not knowing exactly what happened or where he is.

“My children are still very much effected by the death of Roo and are nervous around any birds.

“I believe the protection should be dropped from these creatures. A cull would be pointless long term but without the protection numbers could be managed responsibly. They are scavengers and make mess and cause harm and stress. They are a menace.

“Yes we have turned them into scavengers by reckless people littering and feeding them and it has become out of control but we are not addressing the problem.

“More signs need to be put up about not feeding them and penalties given as people will still do it.”

Emily said she tried to contact the council at the time of the attack in July 2015 and have the nest destroyed, but was told the animals were protected.

She added: “I was told I must leave the nest alone.

“There should be more done to protect people and their pets. Roo was like another child to me. It has been horrific.”

« Previous post British Mother Travelled 10,000 Miles Across The Globe To Australia For FREE - Blagging Rides On Planes, Tractors, Cars, Ferries, Buses, Bikes And Tuk Tuks
Next article » Schoolboy Forced To Relearn How To Walk After Being Mysteriously Struck By Rare Disease Which Left Him Fighting For His Life