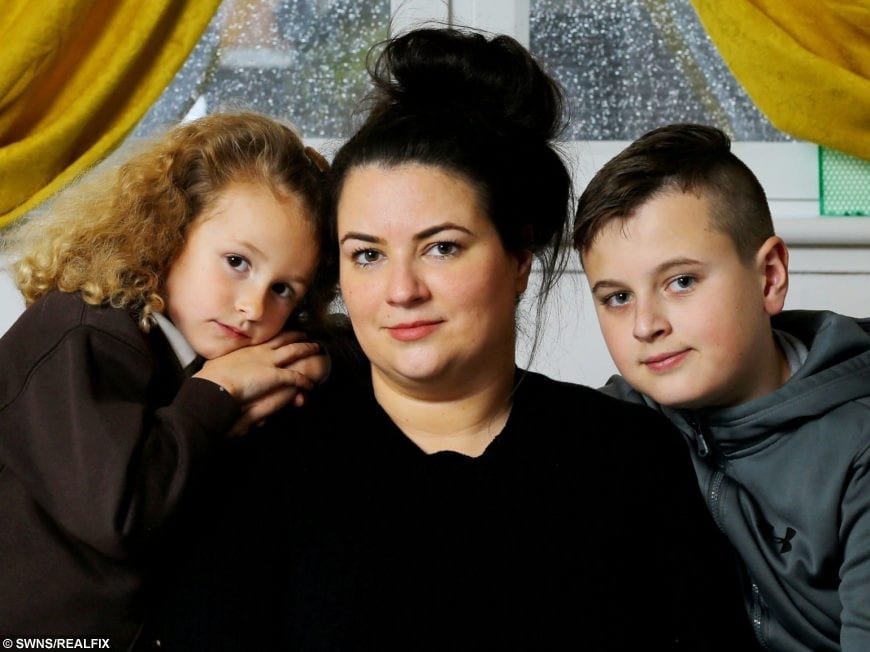 A mum-of-two has told how medics dismissed her aching migraines and gave her paracetamol – but she had TWO brain tumours.

Laura McComish, 36, had been suffering from headaches, blurred vision and a buzzing in her ear for a year-and-a-half.

But despite repeated visits to her doctors, Laura didn’t receive the devastating diagnosis until she was rushed to hospital after she collapsed at home.

Laura claims medics dismissed her symptoms, telling her she had gynaecology problems on one occasion, and to get her eyes tested on another.

Laura, mum to Josh, aged 12, and Daisie, aged five, was left stunned when tests eventually revealed she had two meningiomas, a slow-growing type of brain tumour.

Despite 90 per cent of the meningiomas being non-cancerous, doctors decided that Laura would have to have her larger tumour removed.

Laura, from Clydebank, West Dunbartonshire, said: “I hit my face off the tap.

“I thought I had fainted because I was too warm.

“I went to A&E and I thought they were checking for concussion.

“Hours later, the doctors told me they had found two masses, one big one at the front of my head and a smaller one.

“Four weeks later I went for the surgery at the Southern General.

“I did have a big matte of hair, but so much of it has fallen out now and the doctors said it was due to stress and the head trauma.

“The surgeon told me that the tumours were slow growing, and they could have been there for years.”

After receiving the devastating news, Laura left nothing to chance and made up a will in case she didn’t survive the surgery.

She said: “When I had surgery, I just wanted to survive it to see my wee girl’s first day of school.

“I even made up a will and said to my mum that if anything happened I didn’t want my kids to see me like that, turn off my machine.

“I wanted them to remember me the way that I was.”

Laura has now filed a complaint to Clydebank Health Centre where she was seen by different doctors during multiple visits over a period of a year-and-a-half.

She said: “I was going to them for headaches, vision and the buzzing in my ear for a year-and-a-half.

“They told me it was gynaecology problems because I was bleeding and referred me for that.

“Once I went in and the doctor said to me about taking paracetamol.

“Another time I went in and was told to go and get my eyes tested.

“When my vision started to go and I had a buzzing in my right ear all the time, I knew that something wasn’t right.

“Every time I left the doctors’ office, I knew I wasn’t happy and I wanted to be referred.

“It took a seizure in the bathroom to find out that I had two brain tumours.

“I thought I was just getting tested for concussion, I didn’t expect to be told I had two tumours.”

Laura’s brain tumours have had a major impact on her life as well as her children.

She has had to give up driving and her job as a home carer.

“I’m still on the seizure pills, so I can’t drive and I had to revoke my licence for a year.

“I used to work as a home carer, so I lost my job too because I needed my car for it.

“I’ve lost a lot to be honest, like all my beautiful hair.

“But I’m still here. I just try to keep positive.

“My family and friends have been amazing, and the neighbours and community as well.

“Joshua and Daisie’s schools have been amazing.

“My sister has got me through it.

“I just want to raise awareness, that if people have migraines to follow it up, and if they aren’t happy, follow it further – don’t leave it.”

A spokeswoman for Clydebank Medical centre said: “The practice takes all complaints seriously and for reasons of patient confidentiality we are unable to discuss individual cases.”

Sarah Lindsell, chief executive of The Brain Tumour Charity, said: “Laura’s experience shows how vital it is that we continue raising awareness of the signs and symptoms of brain tumours, so that patients are referred as quickly as possible for the appropriate tests.

“We hear from so many people whose brain tumours went undiagnosed for months or even years after they first sought medical advice about their symptoms.”