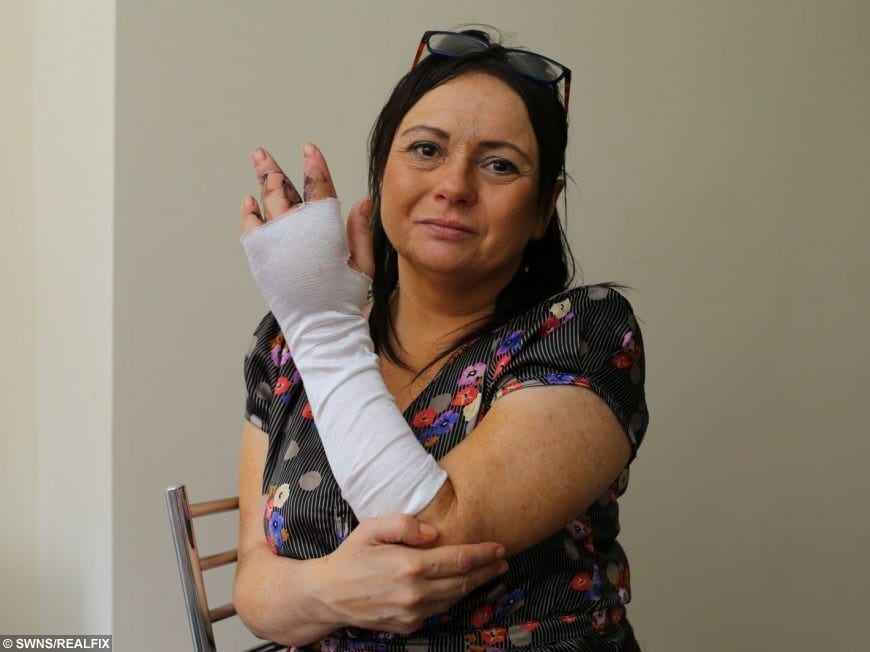 A mum almost died after developing toxic shock when she was scratched by a stray CAT.

Moira Brady, 45, developed deadly MRSA and Streptococcus A, which can cause serious bacterial infections, after she was clawed be a feline in her garden.

As a result, Moira lost one finger from her left hand and said the ordeal has “ruined” her life – but doctors told her she is lucky to be alive.

The surgeon who operated said that if Moira had not sought help when she did, a week after being scratched, it is likely the infection would have killed.

Her kidneys has started to shut down as the infection had spread through her body.

Moira, from Glasgow’s Baillieston area, spent a month in the city’s Royal Infirmary and has had two skin grafts on her arm and will require more surgery in the future.

She said she was scratched by a cat – possibly feral – that was fighting with another feline on a trampoline in her garden.

The animal lashed out after she tried to shoo them away.

She thought nothing of the scratch at the time but it had punctured her skin and days later her hand swelled up and one of her fingers turned blue.

Moira, who has two daughters, said: “They asked me if I had been near animals.

“The doctors had to take half of my finger off and then took the rest of it off.

“The infection went right through my body.

“They said I could have died or lost my whole hand.

“The surgeon stayed five and a half hours after his shift to save my life and I had to have a blood transfusion.

“He said to me I was very lucky.

“The amount of people I’ve spoken to who couldn’t believe this happened after getting a cat scratch.

“It’s ruined my life. I can’t do everyday things now like taking food out of the oven.”

Dr Emilia Crighton, Consultant in Public Health and Head of Health Services Section, NHSGGC said: “If it is just a scratch clean the area and only seek medical attention if it gets infected.

“If it is an actual bite and the skin has been broken I would advise people to seek medical attention as the area could become infected.

“Your own GP or local pharmacy would be the first, easy to reach, point of contact.”