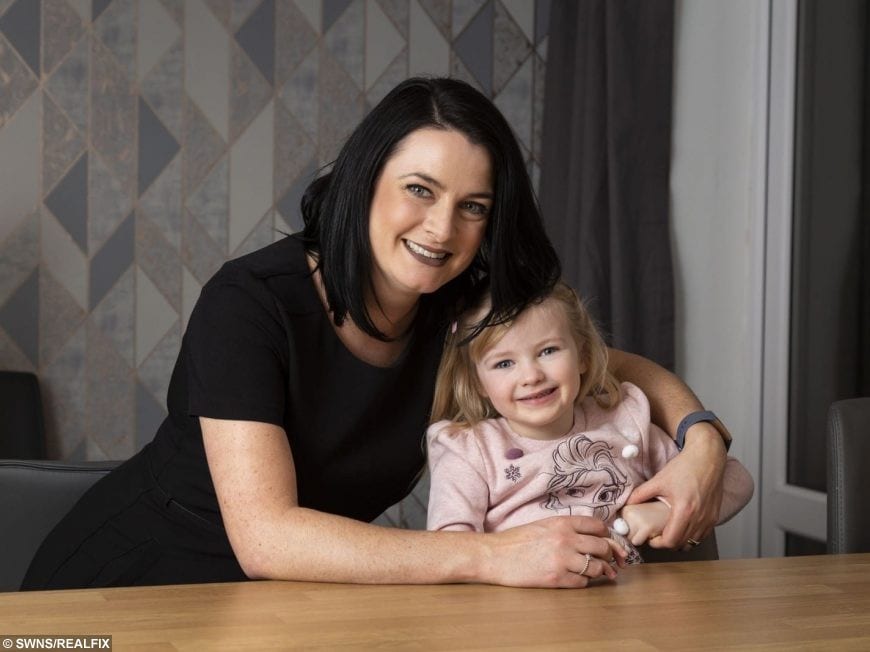 A mum-of-one who gave birth to a baby girl after a second round of IVF has given the gift of life to another couple – by donating her EGGS.

Holly Atkinson, 32, wanted to help give a childless couple the joy of parenthood after it took her eight years to have a baby.

She first fell pregnant aged 21 before heartbreakingly suffering a miscarriage at 12 weeks, which was the start of a traumatic journey to motherhood.

Holly and her husband Mark, 33, then had their first round of IVF through the NHS in September 2014 but sadly two embryos did not develop after being transferred into her womb.

Undeterred, the couple went through a second cycle of IVF just months later and amazingly fell pregnant following a positive test in March 2015.

She then gave birth naturally to daughter Mia who weighed a healthy 6lbs and 14ozs on October 29, 2015 – coincidentally during National Fertility Week.

The couple decided they wanted a sibling for Mia while still in the maternity unit following her birth but knew they would need to go through a third round of IVF.

Through the treatment, Holly produced 25 eggs and selflessly donated 12 frozen eggs to enable another couple to have their own dream family.

It proved to be a success but the couple, from Charnock Richard near Chorley, Lancs., have not been given any other details other than gender and year of birth due to patient confidentiality.

Holly, who works for Galloway’s Society for the Blind, said: “I’m over the moon. Looking at my little girl and knowing I was able to do it for someone else makes me really proud.

“We wanted to donate some of my eggs to another couple as a way of giving something back to someone who has not been as lucky as us.

“I did battle with it a little bit in my head at first but the feeling of happiness and pride quickly took over because I know what it means to have a baby.

“You can’t pick and choose but for us, it didn’t matter. For somebody to go through this process and the difficulties of infertility we know the baby will be going to a fantastic, deserving home.”

Sadly for Holly and Mark, their own third round of IVF didn’t work but the couple have one remaining frozen embryo left to try again for Mia’s sibling.

“Of my 13, only two developed and I had one put back. I now have one frozen embryo left so we are hopeful for the future, ” she added.

“I am desperate to be pregnant again and go through the entire experience all over because it was amazing, I loved it.

“Even though we have our little girl and had already experienced a negative test result in our first round, getting a negative more recently was still really hard.”

Holly says she would love to one day meet the child knows the decision is completely out of her hands.

“From my point of view, I would love to see a family unit that we have been able to create and see a child who was happy,” she added.

“I would love to one day meet them but it’s not my choice, it’s completely out of my hands and if it did happen I would want it to be for the right reasons for the other family and the child.”

Holly and Mark, a showroom fitter, first became an item after leaving school and quickly knew they wanted children because they wanted to share something “which was just ours”.

She came off the pill when the couple had an offer accepted on a house aged 20 and around 18 months later she fell pregnant, which sadly ended in a miscarriage.

However, the couple were worried about the length of time it took Holly to fall pregnant but say they were practically laughed at by doctors after airing their concerns given her young age.

Holly was eventually referred aged 27 before undergoing her first round of IVF treatment through the NHS in September 2014 which proved unsuccessful.

Following a second round of IVF, Holly fell pregnant in March 2015 and was at first expecting twins, but by 12 weeks only one embryo had survived.

The couple contacted Manchester-based CARE Fertility in 2017 after the birth of Mia before Holly made the decision to donate some of her eggs with the full backing of her husband.

After having 25 eggs collected, she donated 12 and kept 13 but she has now been left with only one frozen embryo.

“It was after I had my little girl that it became an option for me,” she added.

“I think it was because we were in such a good place afterwards and because of the joy that our little girl brought to us, I could not imagine being without her.

“Even though there are things that make me question if it was the right thing to do, I know it was especially after knowing this couple had that success.”

Holly was paired with a dedicated person or couple whose treatment was synchronized with her own.

The idea was that the treatment partner would be ready to receive embryos around the same day Holly had an egg collection and it proved to be successful.

Holly says she has not been given an explanation over why she has had fertility issues, but revealed she had polycystic ovaries (PCO).