Pictured - Sharon Palmer of Swinton, Grtr Mancs., See Ross Parry Copy RPYUMBRELLA : A woman miraculously survived a freak accident after she fell face down onto her UMBRELLA - leaving it stuck in her throat. Sharon Palmer, 43, fell off a chair and collapsed, hitting her head on a mirror and table and landing on her brolly.But in a shock twist, the material from the umbrella then got stuck her mouth and blocked her airway, stopping her from breathing. Thomas Temple/rossparry.co.uk

A woman miraculously survived a freak accident after she fell face down onto her UMBRELLA – leaving it stuck in her throat.

Sharon Palmer, 43, fell off a chair and collapsed, hitting her head on a mirror and table and landing on her brolly.

But in a shock twist, the material from the umbrella then got stuck her mouth and blocked her airway, stopping her from breathing.

Sharon says; “They told me just one slightest move and it would have blinded me.

“I’m so lucky to be alive, it was without a doubt the worst day of my life.”

The mum-of-two who is married to Kieran Train, had been visiting a salon belonging to her friend Jane Blood, on on June 17 when she began to feel faint.

Jane says; “It was the most traumatic thing I have ever seen.

“I was talking to her and she looked like she was about to sneeze.

“She just flew off her chair and fell straight into a glass table and face down on to her umbrella.”

Jane, who owns the Body Beautiful salon in Little Hulton, Gtr Mancs., rushed to get the help of beauticians, who dialled 999.

She said: “I turned her over and saw something and I had to try and stop myself being sick.

“She had fallen on her umbrella and the umbrella got stuck in her face.

“There was blood everywhere, it was like something out of a horror film.”

Jane’s actions helped to save Sharon’s life as she spotted the material from the umbrella had become lodged in her throat.

“I suddenly realised she couldn’t breathe and I started panicking.

“I’ve always been told not to move people if they get something stuck in case of blood loss but they told me to take it out of her mouth to try and help her breathe.

“I knew it was the only thing I could do, and the paramedics said it had helped to save her life.

“It was such a freak accident, I can’t believe it happened. I’m just so relieved to know she’s alright.”

Sharon, who runs a teeth whitening business says: “I was just sitting talking to Jane and the next thing I felt myself go really, really warm.

“I could hear Jane but I couldn’t see her and she said it was like I was looking straight through her.

“The next thing I remember, I could hear all these voices around me asking if I was alright.

“Two paramedics were standing over me, and when I managed to focus, I realised I was covered in blood.

“The sight of it made me pass out again and when I came round I was being stretchered out into an ambulance.”

Sharon, of Swinton, Gtr Mancs., was taken to Salford Royal Hospital where doctors had to wait for severe swelling around her eye to go down before they could glue the area where the umbrella had pierced her face, before inserting stitches.

They also performed tests to work out why she collapsed, but there is no suggestion as to why she was unwell on the day.

“It was so painful, I have never experienced like it,” she said. “There was just this big slit next to my eye.

“My heart rate was so fast that I could feel it beating through my chest.

“I couldn’t believe it when they told me what had happened, I had no idea.

“Nothing so horrific has ever happened to me.”

Despite being released from hospital just hours later, Sharon is still suffering from flashbacks following the freak accident, and has found her confidence levels have dropped.

She said: “I used to be such an outgoing person but I’m quite scared now. It’s completely changed my personality.

“If I take the dog out I’m looking over my shoulder, and when I try and go to sleep at night it’s all I can think about.

“I can’t believe how lucky I was to survive something so awful.”

Sharon said she is “eternally grateful” to Jane and the salon staff, who rushed to her aid and made sure she was safe.

She added: “I will never be able to understand what happened and why but I can never thank Jane and the girls enough for the help they gave me. They really are true friends now.” 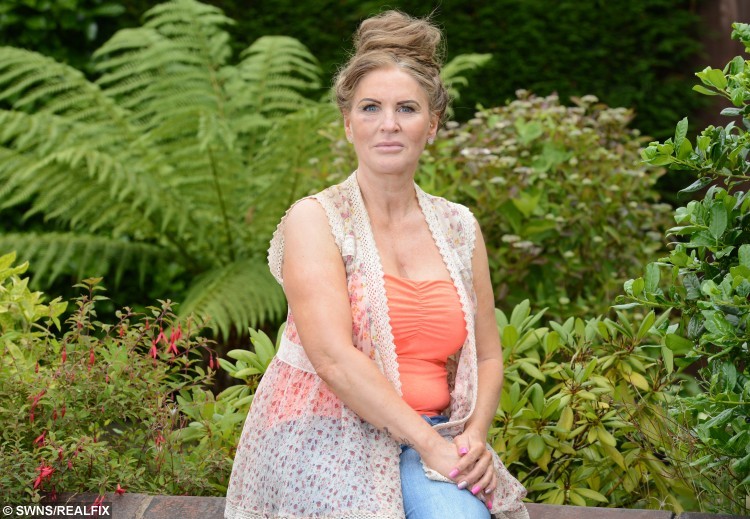