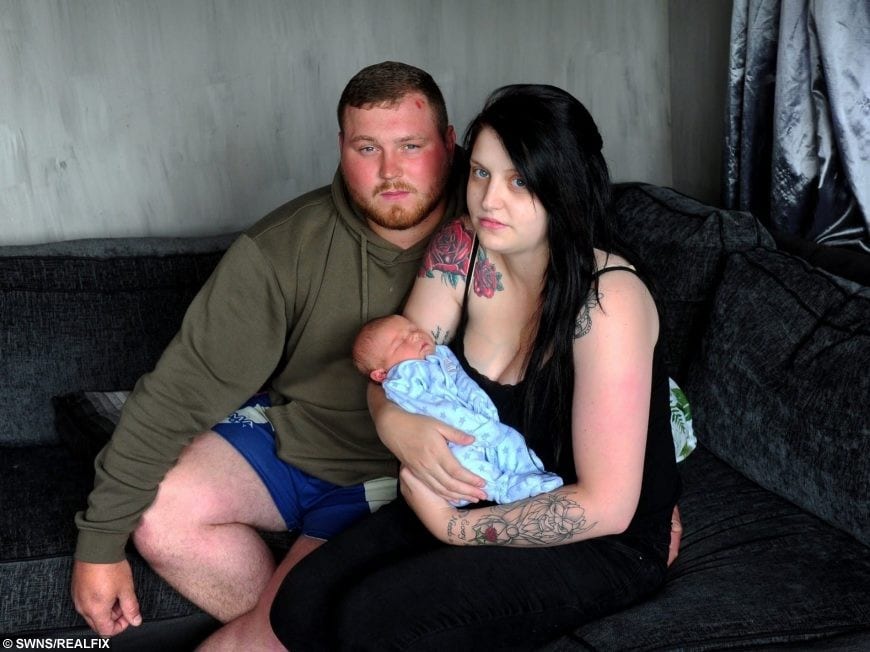 A pregnant woman whose waters broke while she was being rushed to hospital in a taxi was fined £50 by the driver – for making a ‘mess’ in the backseat.

Dana Harrison, 23, had started to give birth in the vehicle and the new mum “near enough had the baby’s head in her hands”.

When she got out of the taxi and went to rush inside the hospital the driver, whose name isn’t known, reportedly asked her if she was “going to clean the car”.

According to Dana, who went into labour eleven days before her due date, the man then told her she had to pay £50 for making a mess.

Not quite believing what she was being told Dana frantically negotiated with the cabby and agreed to pay him £30 on top of the fare.

She then ran inside St James’s Hospital in Leeds, West Yorks, and gave birth to healthy baby boy Blake a short time later.

Her partner and Blake’s dad Aiden Ibbotson, 23, was fishing with friends when Dana went into labour but rushed to her bedside in time for the birth.

“Dana near enough had the baby in her hands.

“Apparently the driver said he was going to wait outside the hospital for someone to bring wipes out to clean the car.

“She ended up giving him £30 on top of the fare, which was more than usual because he had gone the long way anyway.

“I couldn’t believe it when she told me.

“What could she do?”

He added: “The midwives were clearly shocked by his actions.”

Dana was at home when she went into labour earlier this week and she immediately called Roadrunners taxi firm for a lift to the hospital.

According to Aiden, the driver didn’t take her by the quickest possible route and her waters broke while she was inside the vehicle.

He said: “I have tried to call the company but they have said I can only accept their apologies and they won’t tell me who the driver was.

“I asked for his badge number which would’ve been in his car but they would not give it to me.