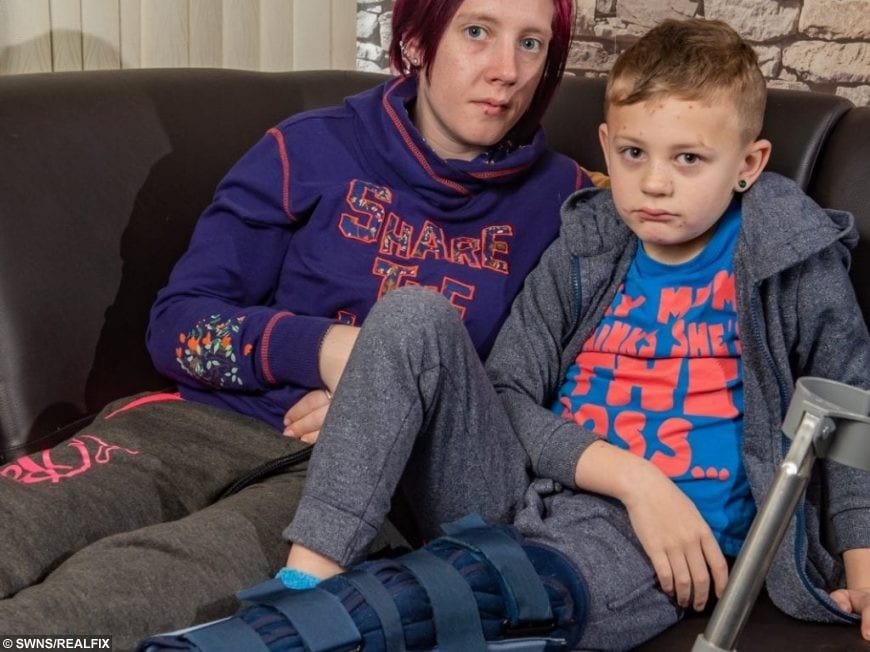 A mum had spoken of her anger after her seven-year-old son was forced to take part in PE at school – just two hours after he broke his kneecap in the playground.

Sammie Gwilliams, 25, has taken her son Brandon Hunt out of lessons after claiming staff failed to get him any medical help following his horror fall.

She says the youngster was forced to “hop around all day” in agony after he fractured his patella at Olive Hill Primary School, in Halesowen, West Mids. on March 11. 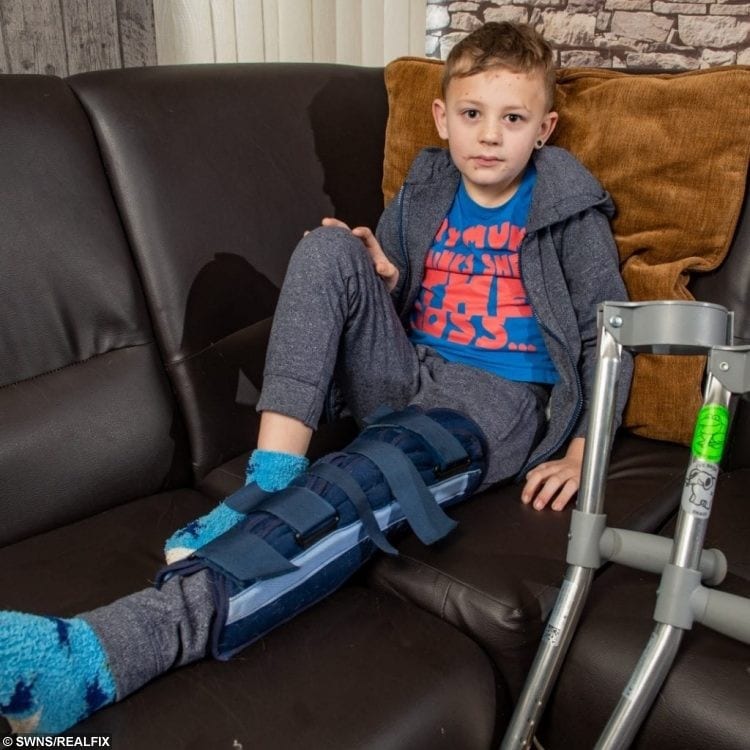 The mum-of-one noticed Brandon could hardly stand when she picked him up from school and was told first aid was carried out on him earlier in the day.

But she was left stunned to learn Brandon had been made to do PE following his injury where children were made to play cricket after a game of tag.

Brandon was taken to hospital where his broken kneecap was confirmed by doctors and he is now recovering in a leg brace.

Sammie said she was disgusted with how the situation had been handled and believes teacher’s actions could have made his injury worse in the long-term.

She has even called for the school to be closed down for failing to protect her son and accused them of “neglect” after they didn’t call for an ambulance. 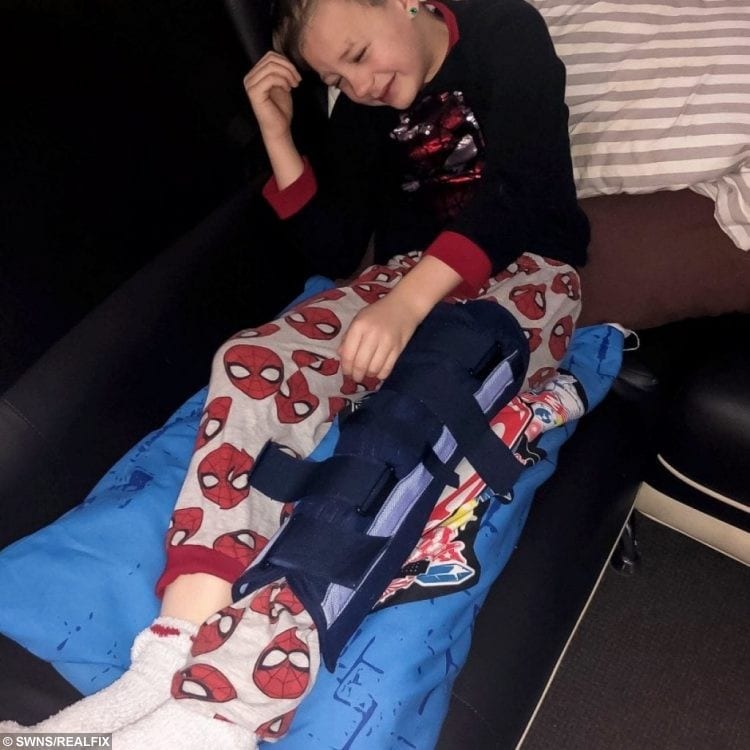 Full-time mum Sammie, of Halesowen, fumed: “The fall happened during morning break. Brandon was on a climbing frame by a fireman’s pole when he fell.

“The teacher sent him to the nurse’s office for first aid where he was given a cold compress to put behind his knee.

“They told him he’d be fine and said he’d just have bruise in the next couple of days before sending him back to lessons despite the fact he could barely walk.

“He told his teachers he was in agony but they didn’t seem to care.

“He was forced to do outdoor PE where they played tag before a game of cricket and even then he kept telling them he was in pain.

“I picked him up from school at around quarter past three, I could see straight away there was something wrong with him.

“Brandon could hardly stand and he was unable to put any pressure on his one leg. He was very distressed and in loads of pain.

“I then questioned his teacher as to why my son could hardly stand. Her reply was that Brandon had fallen earlier in the day but was fine. 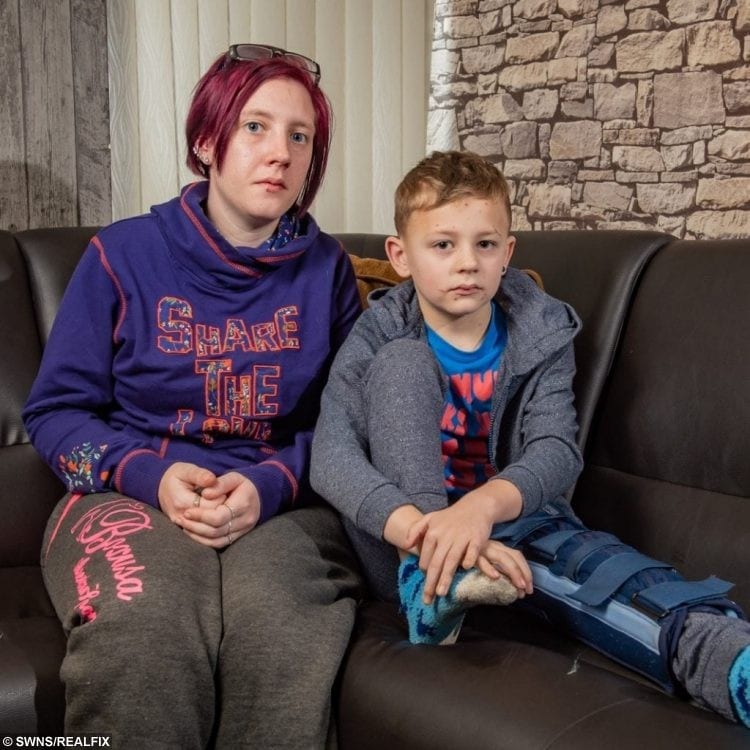 “I took him straight to the hospital, his knee was swollen, he had an X-ray and we found out he had fractured his knee cap.

“They haven’t told us how long it will take for his knee to heal. I’ve been told he may need surgery at a later date and I’m worried the school’s actions has made it worse.

“Olive Hill Primary School at no point phoned me to let me know my son had fallen.

“Neither did they administer the correct medical intervention as they failed to get my son any medical help and no ambulance was called.

“They completely ignored the fact that he was in pain and left him all day hopping around on one leg.

“I went back to the school the next day and I spoke to the headteacher, they never even knew my son had an accident.

“The accident form that is there for when a child has an accident was not filled in, it wasn’t completed until four days after I had told them.

“This school did not follow the correct procedures of safeguarding my son.

“He even asked one of the teachers to phone me as he was very frightened and needed help. 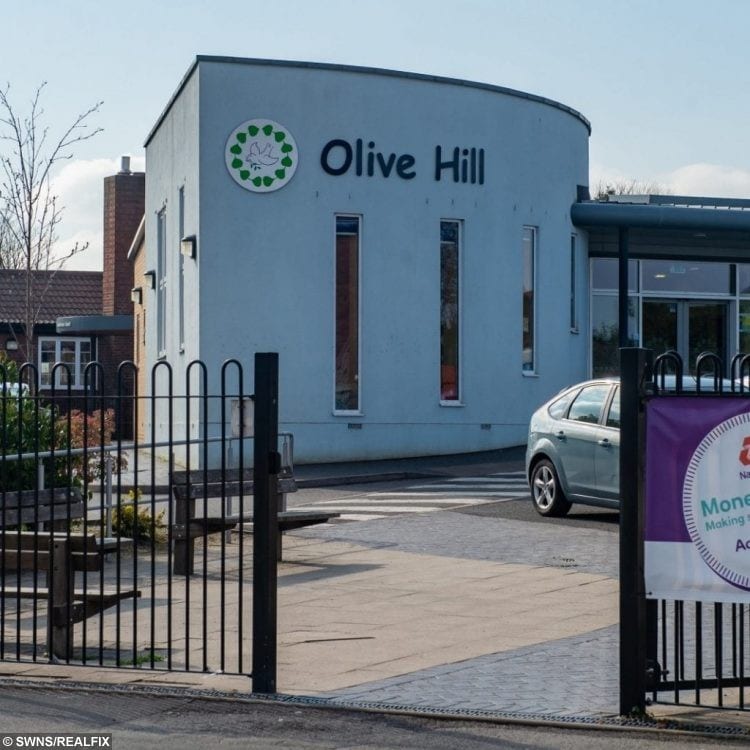 “I’ve lodged a complaint, I was left furious, I don’t feel as though my son will be safe at the school, I’m removing him from the school.

“I’ve had no apology from the school not even after I had told that Brandon had fractured his knee.

“In my opinion I think the school should be closed down, if a parent neglects their child they get punished so why shouldn’t the school.”