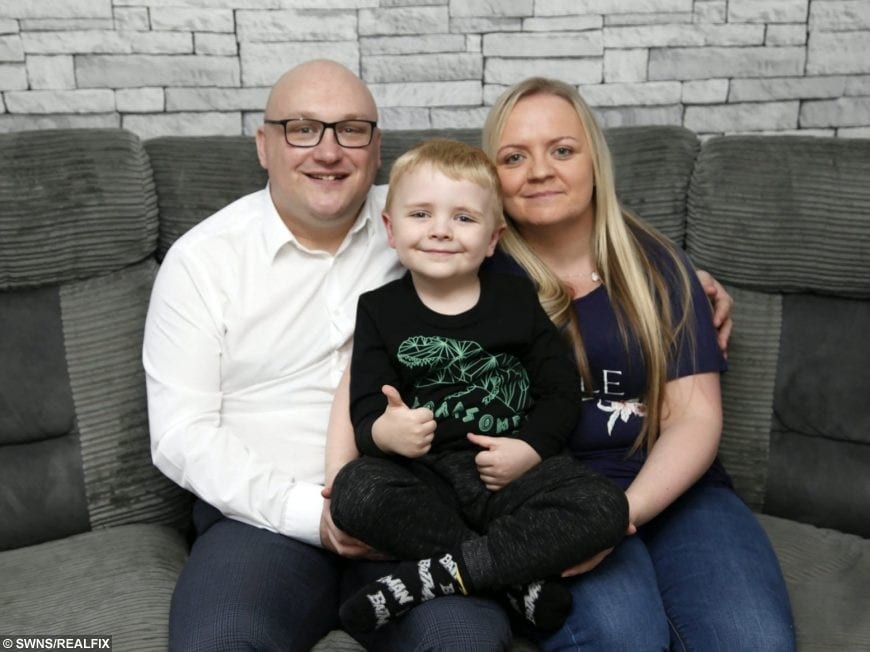 A dad who attempted suicide told how it saved his life – after it led to a ‘silent killer’ cancer diagnosis.

Robert Allen, 38, reached rock bottom at the start of 2019, as he struggled with the demands of parenting.

The dad-of-one had been plagued with anxiety about whether he could be a good father to his son, Cameron, now aged four.

HMRC officer Robert felt exhausted by the demands of his toddler son, and felt he did not have the energy to play with him as often as the tot wanted.

He felt fatigued all the time and it took a toll on his marriage to wife Lesley, 35, who he has been with for ten years.

The following day his wife took him to the GP, and Robert promised to take steps to address his mental health, and also to get fit.

Blood tests were taken which showed irregularities with his liver – but in April 2019, Robert was diagnosed with stage 2 liver cancer, after a 6cm tumour was found.

The ‘silent killer’ cancer had caused the tiredness which Robert had attributed to being depressed and overweight.

A year after his suicide bid, Robert, from Bathgate, West Lothian, believes he has been given a new lease of life by the ordeal.

Robert said: “When I found out I was going to be a father, I was buzzing – it was the most exciting thing ever.

“We were in love and it was what we wanted, but then these fears started to appear in my mind.

“Physically my health started to deteriorate, I started to feel fatigued all the time.

“If my son was wanting to do stuff with me, I’d put it off.

“I would never have thought it was kidney cancer – I thought I was overweight and not looking after myself.”

The tiredness began around the start of 2018, when Robert’s little boy was two years old.

He said: “My son would be wanting to do stuff with me and I just didn’t have the energy for it.

“I would see him playing by himself, and I would feel like I was failing my wife too.

“After the suicide attempt she was absolutely devastated.

On January 21 2019, Lesley took Robert to the GP surgery and he vowed to get himself in a better place both physically and mentally.

He was helped by charity The Changing Rooms, which is linked to his football club, Hearts.

But just three months later, the family was given the devastating cancer diagnosis after a blood test showed irregularities in his liver.

An ultrasound was performed showing a tumour of his left kidney – which would otherwise have gone unnoticed.

Medics at the Western General Hospital in Edinburgh performed an operation on April 8 2019, three days after the diagnosis.

Robert said: “When I got the cancer diagnosis, my wife fell apart – but I was like ‘what do we need to do to fix it?’.

“Three months ago I was going to take my own life but in the background there was something which was hoping to do that for me.

“After the operation I began to realise the impact of the physical side of the illness – I was able to say ‘OK, it wasn’t because I don’t love my kid and don’t want to play with him’.

“I could stop beating myself up.

“I feel like getting through the mental illness and cancer was the best thing that ever happened to me.

“This time last year I was signed off work, two weeks after a suicide attempt.

“My life has been transformed. I’m much more focused on my family.”

He said: “This time last year it was difficult to find joy in it, I was just crushed.

“This year we’re planning a party. I’m part of his life properly.”