by RealFix
in Health, Relationships
0

Overweight couple Noel and Leisa Hoey seen in their wedding pictures. See SWNS story SWSLIM; A husband and wife have lost an incredible 24 stone between after being shamed by their fat wedding photos. With a combined weight of 52 stone at their heaviest, Noel and Leisa Hoey were so big they couldn't sit beside each other at the cinema or on an aeroplane - and broke their bed frame FOUR times with their bulk. But after being shamed by their unflattering wedding photos Noel, 35, has lost 16 stone - the equivalent of a baby HIPPO. Leisa, 33, lost eight stone and a whopping SIX dress sizes after squeezing her massive bulk into a size 26 gown for their big day.

A husband and wife have lost an incredible 24 stone between after being shamed by their fat wedding photos.

With a combined weight of 52 stone at their heaviest, Noel and Leisa Hoey were so big they couldn’t sit beside each other at the cinema or on an aeroplane – and broke their bed frame FOUR times with their bulk.

But after being shamed by their unflattering wedding photos Noel, 35, has lost 16 stone – the equivalent of a baby HIPPO.

Leisa, 33, lost eight stone and a whopping SIX dress sizes after squeezing her massive bulk into a size 26 gown for their big day. 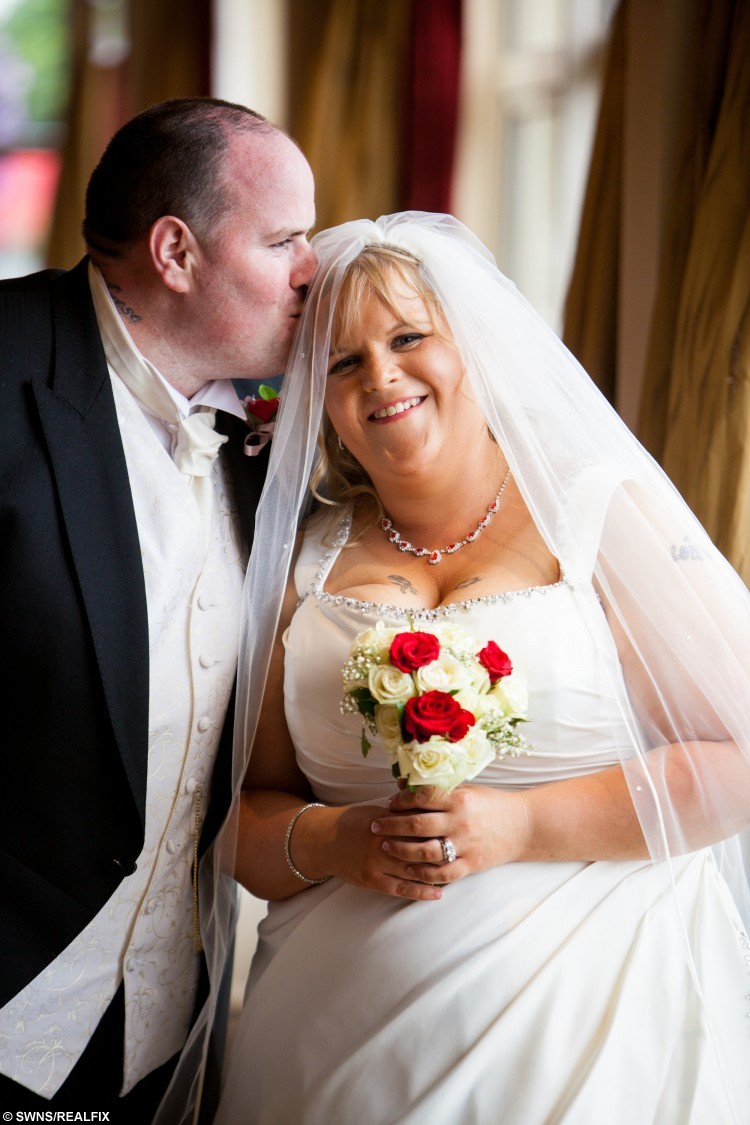 Leisa said: “When I saw the wedding pictures my heart sank – I felt absolutely disgusted with the pair of us.

“From the moment I saw them I knew they wouldn’t be pictures I’d look back on with a smile and treasure forever. I was so disappointed.

“Finally we can do the things normal couples do, cuddling in the cinema, sitting next to each other on public transport and even having a peaceful night’s sleep without fear of breaking the bed.”

The couple, who met in 2003, admit to being life-long fast food junkies but say they really piled on the pounds after the births of their children AJ, 11, Tyreece, eight and twins Maddison and Torey, two.

Things got so bad that Leisa was recommended for a gastric band when her weight hit 18 stone but when she fell pregnant with their twin girls the operation was put on hold.

Over the next year Leisa’s weight crept up to over 20 stone and security guard Noel’s weight rocketed to 32 stone.

Leisa said: “We knew we were big but with a combined weight of over 50 stone we weren’t just unhealthy we were ticking time bombs.”

Noel added: “There was no ignoring how bad things had got. We’d lie awake at night – not because of the kids – but listening to the sound of the creaking bed frame straining underneath us.

“After one night shift I came home exhausted, jumped into bed and the wood just buckled under my weight and came crashing down.

“We broke the bed three more times after that. We just gave up and slept on the floor on a mattress.”

When Noel proposed in July 2013 Leisa had to telephone bridal shops in advance to check if they catered for plus size brides.

She said: “It wasn’t quite the magical experience I thought picking my dress would be.

“I was limited to just one store in town and all the dresses that did fit made me look like I was wearing a huge duvet.

“I didn’t want to show off any skin or my figure – I just wanted to hide.

“I wire the longest veil I could find to cover my chubby arms like a cape.”

The couple didn’t even book a honeymoon because they feared they’d have to book two seats each on the plane.

But their biggest disappointment was yet to come.

Noel said: “When the wedding album arrived I flicked through the pictures of our big day and my heart sank. We both looked enormous.

“I knew Leisa would hate them too so I tore the photos into shreds and threw them in the bin.

“Leisa kept asking why they hadn’t arrived yet and I’d just make up excuses because I didn’t want her to see them. But eventually I had to come clean and tell her the truth.”

The pictures spurred Leisa to finally take action and she joined a local Slimming World group.

It wasn’t long before the small changes started to make a big difference to their waistlines.

Leisa said: “Our big clothes were just hanging off us. As the weight started dropping off we had to keep buying new wardrobes. Our figures have changed so much.”

Now Noel has shed a whopping 16 stone and Leisa eight.

Leisa said: “We both feel amazing.

“I get joy from the little things like running after the kids and not liming myself to plus size clothes. I’ve got so much more freedom.

“Noel looks so much younger too. He’s like a new man.”

“He used to be all squishy when I lay on him but now he’s much more toned.

“Part of me wishes we’d waited till after we’d lost the weight to get married. But we met each other when we were big and we’ve been there with each other through thick and thin and that’s what counts.”

Noel added: “What we’d love to do now that we’ve lost the weight is renew our vows.

“Leisa could have the dress she always wanted.

“We’ve lost so much weight our wedding rings don’t fit us anymore so we’d have to sort that out too but finally we could have some pictures to be proud of.”