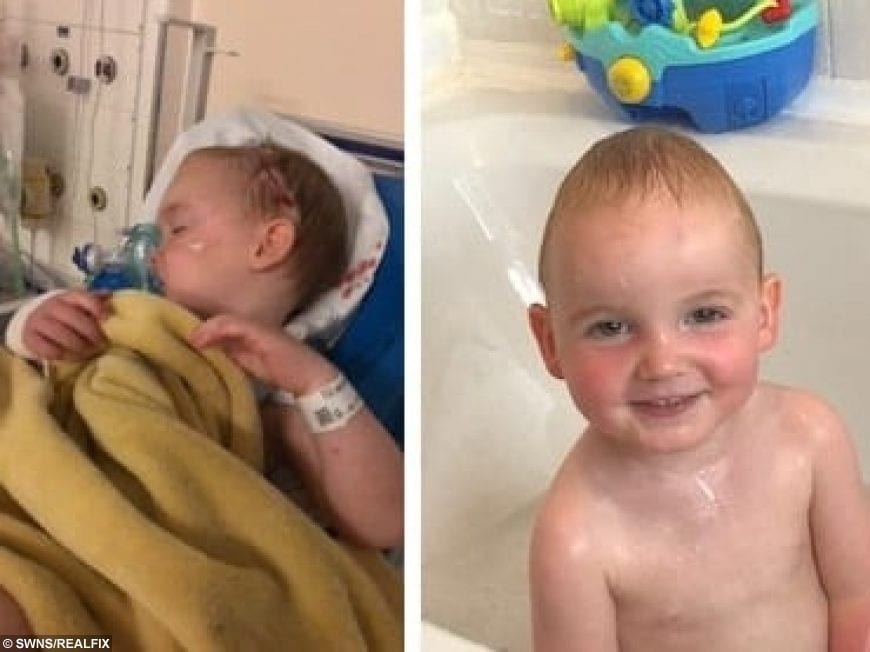 The family of a baby who died in hospital were ignored by medical staff when they rightly raised concerns he had sepsis, an inquest heard.

Jack Sands died days before his second birthday following a low-risk operation on his skull at Leeds General Infirmary, West Yorks, in July 2018.

An inquest into the boy’s death yesterday (Weds) heard how the surgery, carried out on July 12 that year, went well and that he was due to discharged two days later.

However, Jack developed gastroenteritis, the coroner said, and “became increasingly unwell” before being rushed to intensive care four days later.

Recording a narrative verdict, coroner Kevin McLoughlin said it was “unclear” how the bacterial infection which led to Jack’s death started.

His mum, Gemma Sands, told yesterday’s hearing her son’s skin had become pale and mottled some time before he went into cardiac arrest.

“My dad was telling the nurses about this but nobody listened,” she said.

The inquest heard Jack’s family searched online for the symptoms of sepsis and raised their concerns with medical staff, but were told “we’re the professionals, we know what we’re doing”.

Senior sister Julie Cooper told the inquest sepsis “wasn’t on the radar” on the ward Jack was being treated at the time of the tragedy, but that staff had since received relevant training.

Additionally, antibiotics “could have and should have” been given to the boy more than three-and-a-half-hours earlier than they were, it was heard.

Mr McLoughlin said: “The administration of antibiotics was delayed for some hours that evening after a diagnosis of sepsis was considered, although it is unclear whether this made more than a minimal contribution to the outcome.

A post-mortem examination showed “an overwhelming bacterial infection” on Jack’s brain around where he had the operation.

“The origin of the infection and the mechanism by which it developed, are unclear,” the coroner concluded.”

Paul Chumas, the brain surgeon in charge of Jack’s case, told the inquest: “I hope one of the lessons learned is that we should listen to parents because they are the specialists in the care of their children.”

The inquest heard the operation, which was done to avoid him having an abnormally shaped head, only had a 1% chance of going wrong.

Dr Dudley Bush, who wrote a serious investigation report following the tragedy, told the inquest: “Antibiotics should have been given at 7.50pm on Monday when sepsis was first suspected rather than waiting for the blood tests (results).”

Mr Bush added: “Parents should have been listened to and their views taken into account.”

Dr Mike Richards, clinical director at Leeds Children’s Hospital, said: “I personally would like to say sorry to the family.

“If there were any actions that we undertook that contributed to Jack’s death we are truly sorry.”

She said: “We are sincerely sorry that Jack died whilst he was in our care and we accept the coroner’s findings.

“We’ve taken serious action to improve awareness and detection of paediatric sepsis since Jack’s sad death in 2018 including increased training and new tools for the early identification and treatment of sepsis.

“We also launched an annual Sepsis Conference to improve awareness of sepsis, which is free to attend for NHS staff from across the region.

“We have learnt from the findings of Jack’s inquest and will continue to focus on promoting sepsis awareness so that we can provide the best possible care for all of our patients.”

« Previous post "Obviously They’re Not Named After That Ronnie And Reggie!" - Mum Named Her New Twins Ronnie And Reggie - Because She Had Never Heard Of The East End Gangsters
Next article » 'It's All About Making People Smile' - Schoolgirl Brought Festive Joy To Her Village By Hand-Delivering More Than 1000 Christmas Cards - Despite Only Having One Leg