A dad-of-two who spent four weeks in intensive care battling coronavirus, two strokes and pneumonia – is back home with his family just two weeks after leaving the ICU.

Omar Taylor, 31, was admitted to the intensive care unit at Colchester Hospital in Essex on March 22, three days after being admitted with breathing difficulties.

Over the next, terrifying 28 days, Omar was put on a ventilator for coronavirus, suffered a double blood clot on his brain, causing two strokes, and also contracted pneumonia and sepsis.

His wife of ten years, Kaitlyn Taylor, 30, never thought she would see her husband again. 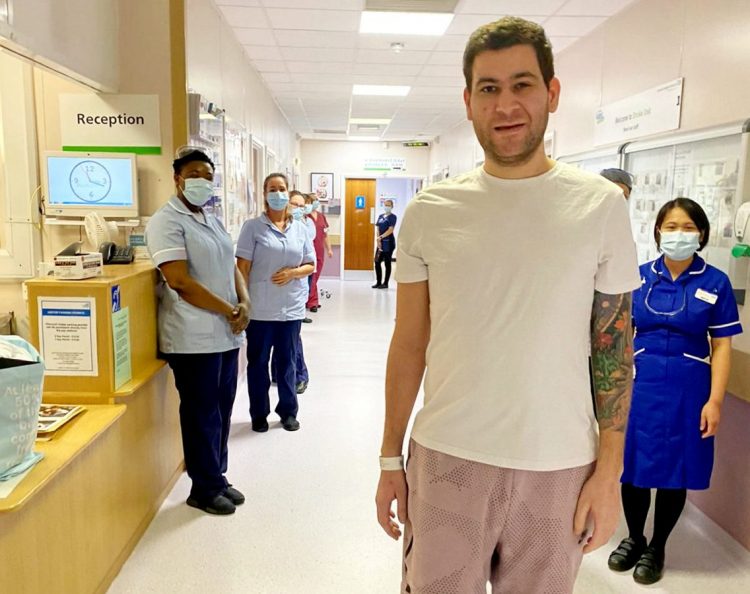 But “miraculous” Omar was transferred off the ICU into the hospital’s stroke ward on April 18 – and just two weeks later, on Sunday, he was able to walk out of hospital and return home.

Kaitlyn, a student nurse who works on the bank staff at Colchester Hospital, said: “He really is a miracle. I never thought I’d see Omar again, ever.

“I was so anxious picking him up, because I never thought he’d be coming home. I was shaking, it was very overwhelming.

She added: “The ICU staff at Colchester Hospital have been so incredible, right down to all the little details. I’m so grateful to them.

“I can’t fault them, any of them. They’re the best in the world.”

Omar, who lives in the village of Rowhedge, Essex, with Kaitlyn and their two children Vivienne, four, and Harrison, one, even got a special clap from hospital staff on Sunday as he walked off the ward. 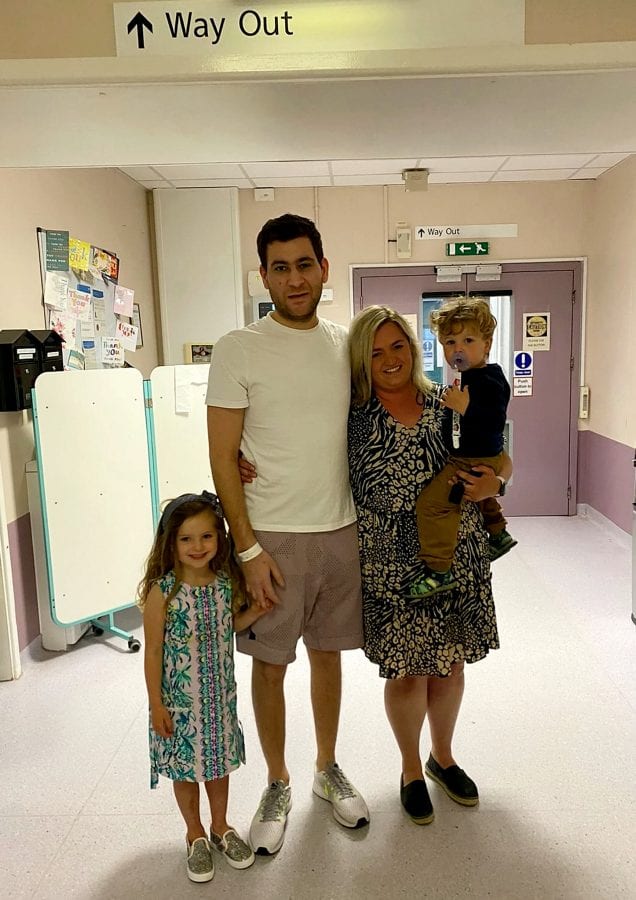 Kaitlyn said: “That was one of his goals. I was told that he would never walk again, so I thought they would bring him out of the hospital in a wheelchair.

“But he walked himself out of hospital. It was very emotional.

“Now it’s only his right arm that he can’t move. He can’t text, and can only speak in very short sentences, which is frustrating for him.

“But we’re hoping that by the end of the year he will be at about 90 per cent recovery.”

Omar, a regional manager for Care UK, became unwell after birthday celebrations on March 13, and made the decision to self-isolate at his mother’s home.

Kaitlyn said: “At first I told him to get a grip and told him he was hungover, or probably had the flu.

“But on March 14, I got a call to say he was in the ambulance on his way to the hospital.

“At first I thought, ‘for what’? I couldn’t really get my head around it. But then I realised that this was actually really serious.

“They kept him in less than 24 hours and sent him home saying he probably had a chest infection.

“He went home and for a whole week he could not get out of bed.” 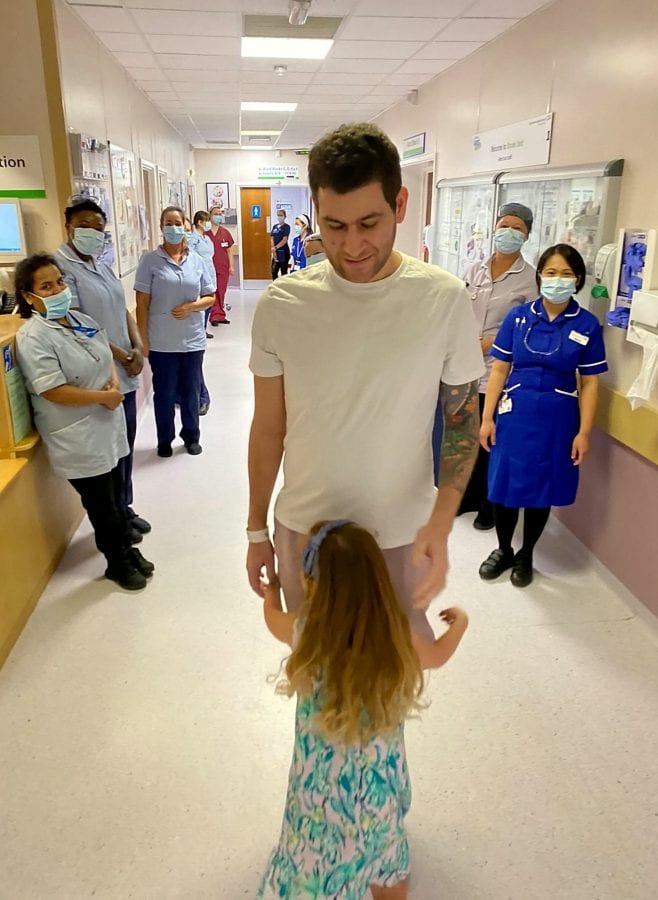 On March 19, Omar was rushed back to hospital and admitted to Mersea ward, where three days later it was confirmed he had Covid-19.

Kaitlyn said: “He was transferred to ICU on March 22 and he was unconscious.

“One morning I woke up at 4.45am and I had ten missed calls from the hospital. I had put my phone on silent as my son kept waking up in the night.

“I had spoken to Omar earlier that day, so I thought he was okay.

“Then I rang them and they said they were laying him on his stomach and he was on a ventilator.

“All I could think about was that I hadn’t got the chance to say goodbye.”

Omar’s condition did not improve for more than a week and doctors became concerned about his brain activity.

Kaitlyn said: “For the first ten days on the ventilator, his condition did not improve at all.

“Nobody could tell me whether he would survive.

“He suffered right-sided heart failure because of all the pressure his heart was under.

“He caught double pneumonia, sepsis, and then suffered a double stroke because of blood clots on his brain.

“At one point, they were thinking of transferring him to Royal Papworth Hospital in Cambridge, to put him on a proper life support machine.”

Against everyone’s expectations, Omar survived, and was transferred to the hospital’s stroke ward on April 18 – where he made remarkable progress.

But Kaitlyn added: “Even after he came out of ICU, they were planning to send him to a rehabilitation hospital in Norwich for six months. 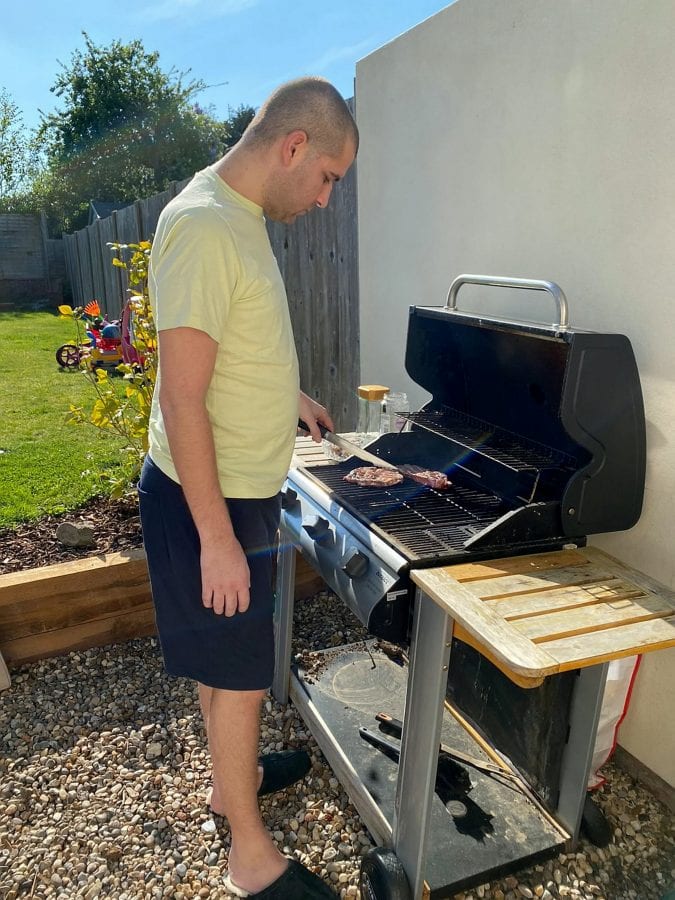 “I just thought, how am I going to manage another six months on my own with the kids?

“We only got to see him once when he was at Colchester Hospital – they briefly wheeled him out of the hospital after he came out of ICU, so the kids could see him.

“But he’s made such amazing progress, they said there was no point keeping him in any more.”

She added: “The kids are so happy to have him home, and they’ve been so good with him – it’s like they know something is wrong.

“It’s all been very overwhelming.”

Omar has been receiving speech therapy and physio at home since being released from hospital.

And friends and neighbours have set up a GoFundMe page to help support his recovery, which has so far raised over £15,000.