One of Britain’s youngest testicular cancer patients is fighting the disease aged just FIVE after his parents found a tumour the size of a GOLF BALL.

Brave Lucas Hellowell has successfully undergone an operation to remove the huge tumour and is undergoing chemotherapy.

His parents Mel Speight, 25, and Jonathan Hellowell, 28, discovered the tumour while getting him dressed on a day off school, while he was suffered with a tummy ache. 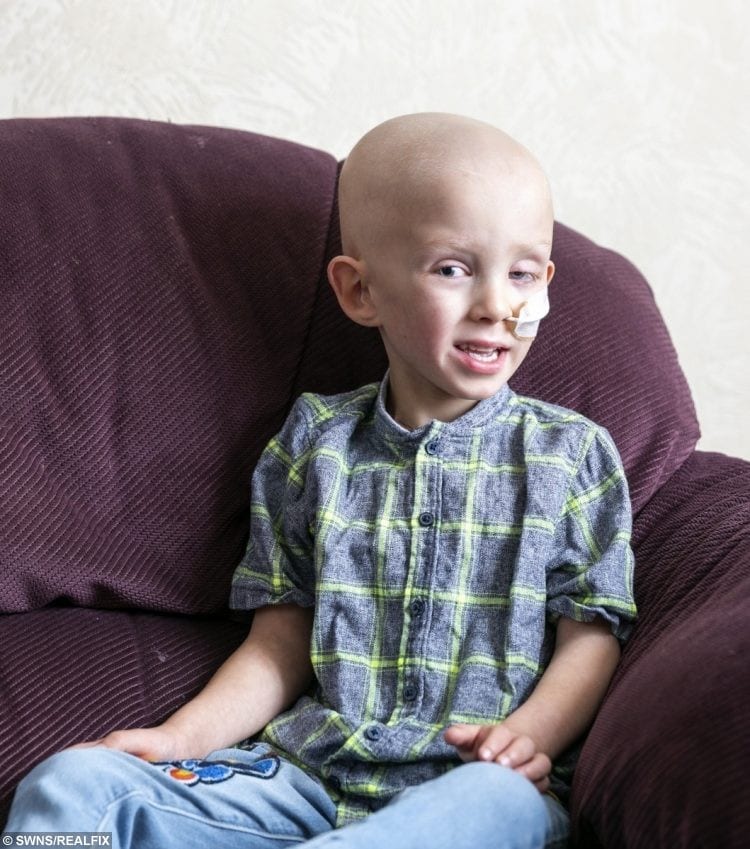 Jonathan rang a doctor to visit their home and the little lad was rushed to Huddersfield Royal Infirmary for immediate checks.

The doctors were so worried about the tumour Lucas was moved to Leeds General Infirmary where he underwent a further CT scan.

The brave youngster is now undergoing a 22-week gruelling course of chemotherapy due to be completed in January 2019.

He has also had testicular tubing removed and has had biopsies, ultrasounds and countless blood tests. 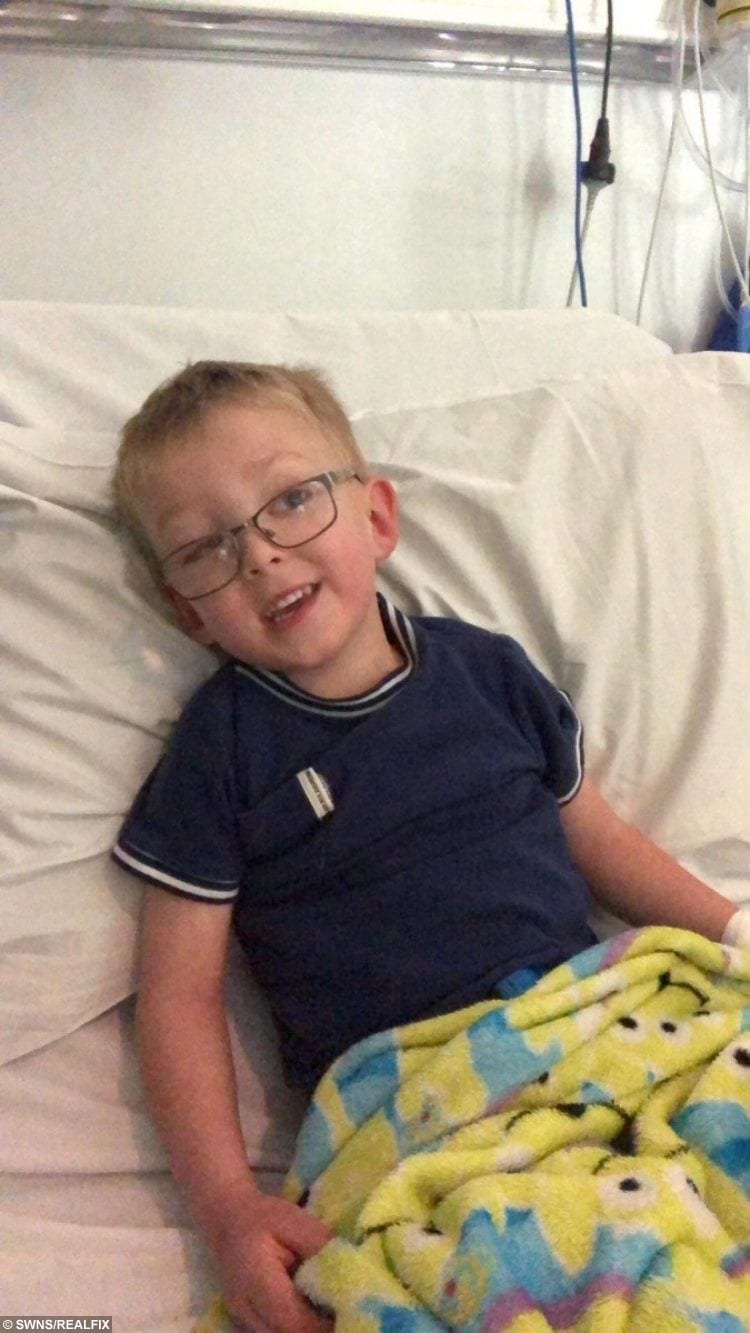 Lucas’s mother Mel from Halifax, West Yorks., said: “He has been my rock.

“It really affects him when he has his double dose. He’s sick with it.

“It’s affected his taste buds too. He’s gone off a lot of the foods he used to love.

“He hates taking his medicine too – that’s the worst thing for him.

“Normally he’s so active and bubbly, he never shuts up, you don’t get a word in!

“It’s hard seeing him go through something like this.

“But he just takes everything in his stride.

“Nothing seems to bother him.” 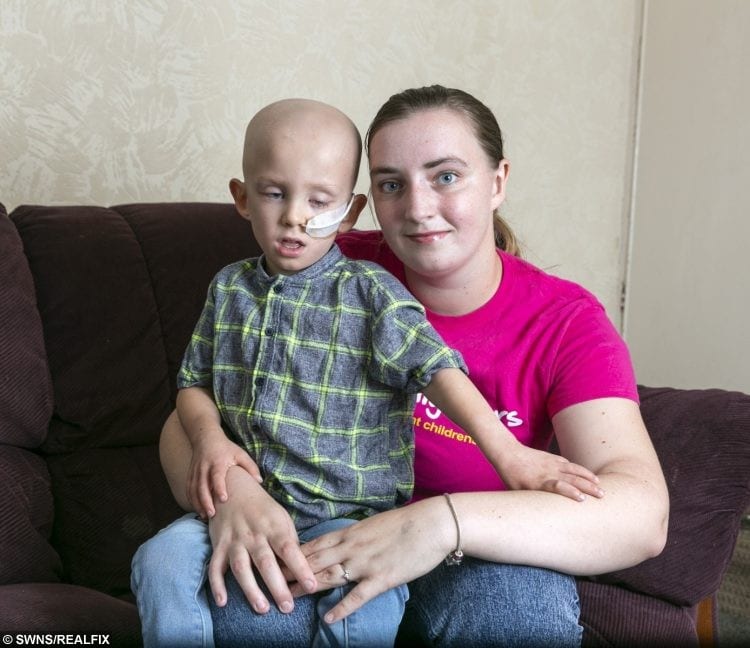 Melissa said she and dad Jonathan noticed something was wrong when getting Lucas dressed on July 6 this year.

He was officially diagnosed on July 20 after a series of tests, and started chemo in August.

Speaking of the moment he was diagnosed, she added: “It came as a big shock.

“I broke down at first.”

Lucas, who has lost his hair due to the treatment, is fighting the condition and continues to watch his favourite films – including recent hit The Greatest Showman.

The family is being supported by charity Candlelighters, which helps families facing children’s cancer in Yorkshire.

His proud father Jonathan said: “Candlelighters have given us so much so we just wanted to give them something back.

“They provided activities for Lucas when he was in hospital, they’ve given us grants to support us, and they’re sending us on holiday to Centre Parcs next year, which will be great.

“It’s those little things that make such a huge difference.

“He loves going swimming but he can’t at the minute, but he’ll love it there.”

“We can’t thank them all enough.”

“Most have an extremely good prognosis with treatment, but the earlier they are discovered the better.

“Testicular cancer in childhood tends to have an extremely good prognosis.” 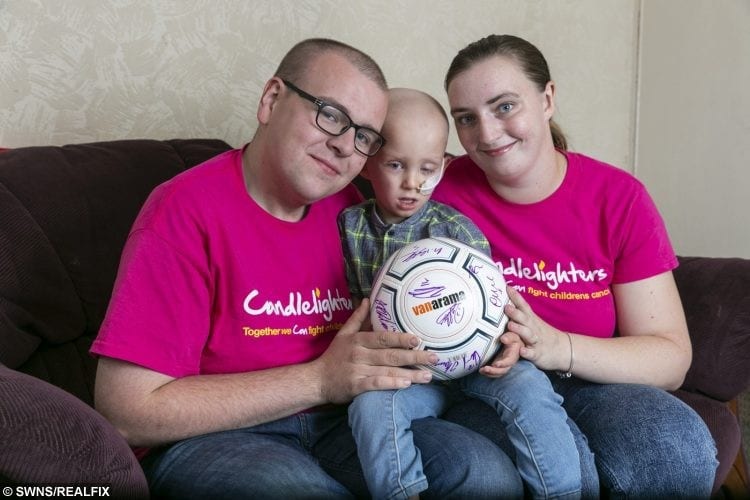 Rebecca Porta, Chief Executive of Orchid, added: “We would encourage all parents to take their child to the doctor if they spot anything unusual.

“If it doesn’t look right then go to see your GP or speak to one of our Male Cancer Specialist Nurses via the Orchid Helpline 0808 802 0010 or visit website www.orchid-cancer.org.uk”

Lucas’ dad Jonathan and uncle Rob Popple recently had their heads shaved, with proceeds going to the Candelighters’ charity.

The head shave has raised more than £900 so far for Candlelighters, which supports families facing children’s cancer in Yorkshire.

Around 30 boys aged 0-4 years and around 10 boys aged 5-9 years were diagnosed with testicular cancer in the UK over the last 5 years, according to Cancer Research UK.