A little boy is looking forward to JUMPING for the first time in his life after spending his childhood hunched over.

Christopher Alford’s spine was 95 PER CENT curved but he’s now standing tall after having one of the vertebrae removed.

He wasn’t allowed to do anything that put pressure on his back until a gruelling 10-hour operation gave him a new lease of life.

“He has always wanted to walk around but wasn’t encouraged to do jumping or trampolining so not to put any pressure on the spine.” 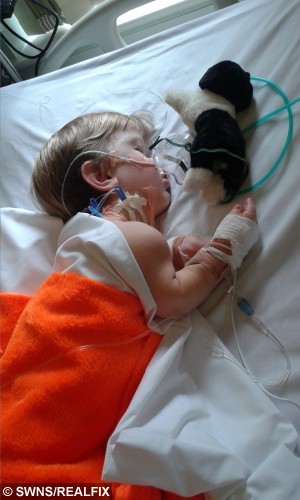 Christopher, seven, was born with a bump in his back and he slowly began to become more hunched.

Doctors feared the curvature would damage his spinal cord, resulting in a difficult procedure to remove part of his spine and allow it to be straightened.

“One of the vertebrae had grown the wrong way and it was pointed,” said Susan.

“During the operation, they removed a lot of one vertebrae and then fused it together. We had four specialists in there because it was so unusual.”

The schoolboy, from Winmarleigh, Lancs., was born with achondroplasia (dwarfism) and later developed the condition known as kyphosis, known better as curvature of the spine.

His dad Richard, a computer shop owner, 35, said: “When he was a baby he developed a bump at the bottom of his spine,” said Susan.

“They hoped it would stop curving at some point and strengthen.

“But didn’t start walking until he was three-and-a-half and it just got progressively worse, so eventually we were referred to a specialist at Alder Hey Children’s Hospital.

“They finally decided they had to operate because at 95 per cent curved it was almost curving back on itself.”

Following the surgery in February, Christopher is now back home with brother Alex, nine, and sister Abigail, four, but he has to wear a moulded plastic jacket for the next three to six months to keep his spine in place.

Susan said: “He’s just been so brave throughout the whole thing. He didn’t complain about anything and was always smiling.

“He was chatting away to people just hours after the operation and hopefully it should make walking easier in the long run.

“He’s really looking forward to going swimming as he hasn’t been able to do that for a long time, and I think it will make his quality of life better.

“We are very grateful to Alder Hey and the people involved in it all. Everyone was just so lovely there and kind and caring, they’ve just done so much for us.”

Real life Wombles! Be amazed at how these twin brother’s spend their spare time