by RealFix
in Families, Health, Most Popular
0

The parents of a three-year-old boy fighting a rare form of cancer are devastated after he missed the deadline for a potentially lifesaving drug trial – by just 14 days.

Little Oliver Welch was diagnosed with cancer of the specialised nerve cells known as neuroblastoma two weeks after the cut-off point for the US experiment.

His father Mark Welch says the only way Oliver could now have the immunotherapy treatment is to foot the bill themselves – which could be up to £200,000.

He said: “We don’t know how much it’s going to cost because it all depends on the trials that are available at the time and what our consultant suggests.

“From our research going off previous treatments it could be about £200,000.

“The first two weeks after his diagnosis just felt like constant bad news. It was just too upsetting to even talk about.

“It just seems so unfair as the drug would be so important to his recovery.”

Oliver has tumours in his lungs, kidneys and liver and has been given a 30 to 50 per cent chance of survival.

He is now undergoing chemotherapy but his family believe immunotherapy would be a crucial part of treating his cancer as it would boost his natural defences.

Oliver’s condition was spotted by a paediatrician who suspected his ailments were more serious than a previous diagnosis of chronic constipation.

The GP secured him an emergency appointment at Royal Blackburn Hospital the same day where the toddler underwent blood tests and scans.

The results showed he had masses in his chest and abdomen and the diagnosis was confirmed on July 5, the day before Oliver’s 3rd birthday.

“He was happy because the nurses at Royal Blackburn Hospital had put banners and balloons in his room so it was like a party.

“We were transferred to Royal Manchester Children’s Hospital on his birthday and he though it was great because he got presents when we arrived.

“The nurses were so good, they’d managed to find out what he liked at such short notice.” 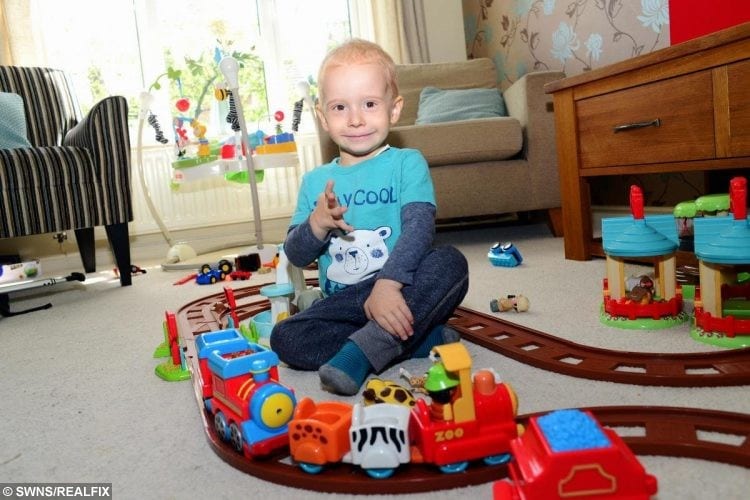 Mr Welch added: “They didn’t tell us straight away that it was cancer.

“When we went in to get the results the doctor showed us Oliver’s X-ray and explained that there was a mass in his chest.

“I was in denial, I just thought it was a bad chest infection.

“Louise knew though, even though they didn’t use the word, she knew the doctor was trying to prepare us for the cancer diagnosis.

“Even when they transferred him to Royal Manchester Children’s Hospital I didn’t believe it.

“I didn’t know that Ward 84 was a cancer ward, I didn’t even know what oncology meant.”

It was then that staff Royal Manchester Children’s Hospita told them Oliver had missed the chance to take part in clinical trials of an immunotherapy drug from America by just 14 days.

Oliver began chemotherapy immediately and has since undergone four of his eight scheduled treatments.

Early tests show the masses have begun to shrink and the cancer has not spread further. 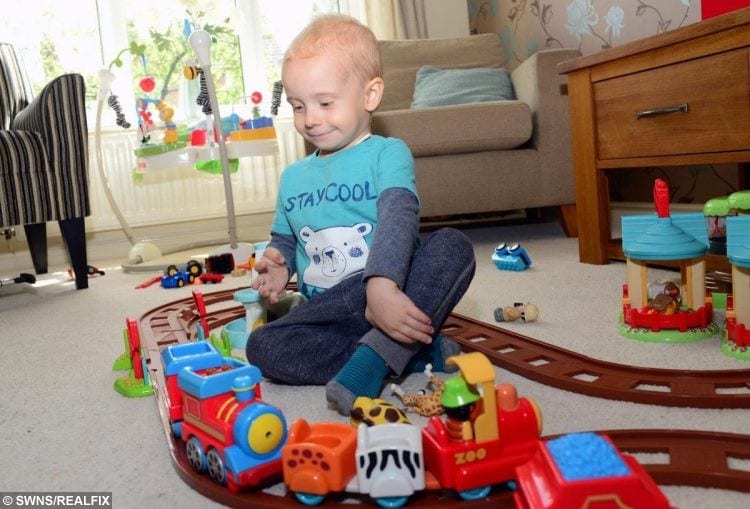 According to charity Children with Cancer, neuroblastoma affects around 95 children in the UK every year.

Mr Welch and Oliver’s mum Louise, 31, said he hopes to spare other parents from suffering by raising awareness of the symptoms.

He said: “At the time, it didn’t seem like he had any concrete symptoms.

“But looking back over the months you see a pattern forming.

“Oliver’s never been a great sleeper but he got worse, he would wake up in the night more and he’d have stomach pain that would come and go.

“He was always one for running wild and playing out but he wanted to sit and watch TV more.

“The problem was nothing was consistent, his symptoms would come and go.

“His little sister Eva was born three months before he was diagnosed, so people were telling us he was just unsettled because of the new baby.

“But looking back it was none of those things.”