Postie had worst ever case of Man Flu which caused four heart attacks, a coma and a year in hospital

A man has suffered the worst ever case of MAN FLU – which lead to four heart attacks, a coma and nearly a YEAR in hospital.

Postman Phil Bayley went to work with a bout of ‘man flu’ and shrugged off his basic symptoms.

GPs gave him antibiotics for the virus but a series of catastrophic complications, including pneumonia and an ulcerated bowel, meant the 58-year-old nearly DIED.

He was sent to London’s Royal Brompton Hospital where he was put into an induced coma and suffered four heart attacks within three weeks.

Doctors say they are ‘baffled’ as to the severity of the complications which started with simple ‘man flu’ symptoms.

They say Phil “cheated death” after he endured eleven gruelling months in hospital and had a temporary pacemaker fitted.

He also picked up a hospital-acquired infection, saw his muscles waste away and was fed given drink intravenously.

After recovering in Dene Barton Community Hospital, the near-fatal experience has rendered Phil unable to walk properly and he has lost use of one of his arms.

Despite the rarity of his complications, Phil is now urging others to make sure they get their flu jabs before the winter season kicks in.

Phil, of Bridgwater, Somerset, said: “It was typical man flu – I’ve always said that man flu was worse than having a baby and now I’ve proven the fact.

“I think I remember saying to one of my work friends that I had a bit of man flu – but I just soldiered on being a man.

“It’s changed my perspective, all I’ve ever done in my life is think ‘oh I’ll get over it’ and just got on with it and that’s the sort of person that I am.

“Sometimes I was a bit lazy and I wouldn’t go to the doctors for certain things and now I think people should seriously think about having the jab.

“My girlfriend said that it nearly killed me several times and they thought that I wasn’t going to make it – but I did through the support of family and friends.

“The doctors didn’t understand why everything happened like it did, it was just one thing after another.

“I’d been ill for about a week or so with a sore throat and a bad chest but usually I just shrug it off and thought I’d get on with it.”

He said: “I went to work on the Monday but started to feel really ill and dizzy so I got taken down to the hospital in Bridgewater, and then they gave me some antibiotics.

“I had a sore throat and a touch of flu so I thought I’d just take the antibiotics and go home.

“I went to bed and I woke up in the middle of that night and I couldn’t breathe.”

Phil was rushed by ambulance to Musgrove Park Hospital where they diagnosed him with flu and pneumonia.

“I stayed there for about a week but I had no oxygen in my blood so they had to use an ECMO machine which basically takes your blood out and puts oxygen back into it.

“They kept me alive doing that and then put me into an induced coma and took me to London’s Royal Brompton Hospital.

“I had pneumonia which ulcerated my bowels so they took most of my colon out.

“I woke up a week later with tracheotomy down my throat and loads of machines around me.

He suffered four heart attacks within the next three weeks and had to have a temporary pacemaker fitted while doctors drained water from his heart.

“It’s difficult to remember exactly what happened because I was heavily sedated with different drugs and I was hallucinating.

“I woke up and I’d lost most of my muscles, I couldn’t breath by myself and I was being fed through a tube.

Phil’s work colleagues at the Royal Mail raised over £600 to help pay for his girlfriend Susie, 43, to make the eight-hour round trip to London’s Royal Brompton Hospital.

“I was in hospital for four months in London so it was quite difficult for my family and my girlfriend to come up and see me every week – that kept me going.

“My work colleagues have been brilliant – they made a collection for me over Christmas so that my girlfriend could afford to come and see me.

“She really encouraged me to get better – I wouldn’t have made it without her.

“It was about 200 miles from Bridgewater to London to come and see me which is an eight hour round trip and very expensive.

“My sense of humour has definitely got me through it as well.

“I missed Christmas and New Year completely but I’ve still got my Christmas presents from last year to give out this year – got to look on the bright side! 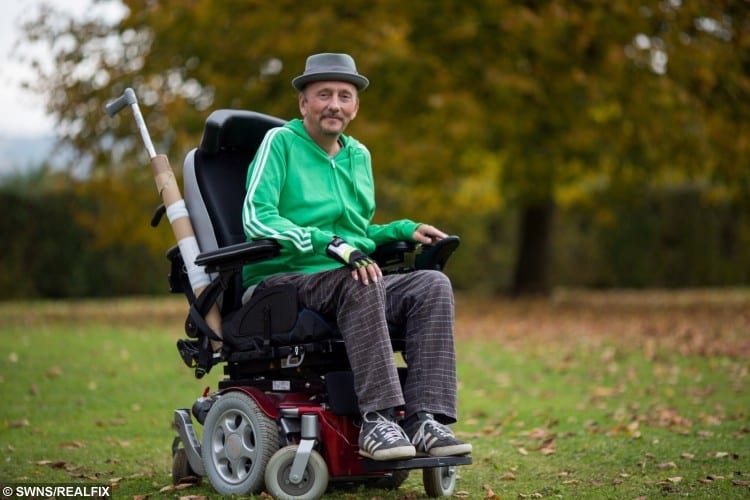 He’s been recuperating in Dene Barton Community Hospital in Cotford St Luke since March and hopes to move into suitable accommodation next week.

“I use a wheelchair now, I can walk a little bit with a stick.

“I’ve lost the use of my right arm because the nerves have gone, so I’ve got to learn to do everything now with the other hand like signing my name.

“I cycled a lot as a postman and I loved going camping and things like that.

Aftermaking a startling recovery, he’s now urging others to make sure they take preventative measures when it comes to flu.

“I did get offered the flu jab the year before last but me being me I didn’t even think about taking it last year.

“I don’t normally have it but I’m due to have a flu jab in the hospital soon.

“I wouldn’t say that everyone is going to end up like I have, it was a bit extreme really because the doctors didn’t know what it was.

“I’m hoping to get out of rehab very soon, just waiting for suitable accommodation because I can’t go back to where I was, I need to go back somewhere that suits my disabilities.

“I’m classed as disabled now and I don’t know when I’ll be able to go back to work.

“I would never dismiss the symptoms now personally but I wouldn’t say people are going to end up like me if they don’t have the jab.

“If the jab does what it says on the tin then it’s definitely well worth having – I’ve changed my mind about it now.

“They need to start doing a man flu jab. Don’t underestimate it and seriously think about having a flu jab.

“What is it they say? Prevention is always better than a cure.”