Rebecca Dykes 24, with her son Rylee and baby Harper. A pregnant woman from Corby went into labour pitchside after celebrating her son's first-ever goal. See NTI story NTIBABY. Rebecca Dykes started having contractions after her son Rylee scored in Corby Hellenic Fisher under-8sÃ 6-2 win over Weekley Rovers Rockets in Kettering last sunday. She gave birth later that evening to a healthy girl called Harper, who was born weighing 8lb 3ozs. And she says the goal tipped her over the edge.

A pregnant mum went into labour on the side of a football pitch after getting overexcited as she celebrated her son’s first ever goal.

Rebecca Dykes, 24, began to have contractions after seven-year-old Rylee hit the back of the net during an under-8s match on September 27.

Incredibly, the dedicated mum even waited another 20 minutes to tell anyone so she could watch the end of the match.

She was taken to hospital where she gave birth later that evening to a healthy baby girl Harper, weighing 8lbs 3ozs.

Rebecca had been a few days overdue and said the excitement of seeing her son score his first goal must have sped things up as she wildly jumped around celebrating.

The mum, from Corby, Northants., added: “I went because I had a feeling Rylee would score and it was a good goal – that must have sped up the process a bit.

“I’d been having pains in the morning but I didn’t want to make a big deal out of it in case it was nothing.”

“It was only when I got home that I realised what was happening.”

She said so far Harper, who shares her name with David and Victoria Beckham’s daughter, has been very well behaved.

She added: “Harper has been as good as gold since coming home and I’ve had plenty of sleep so far, touch wood.”

Manager Fabienne Thomas said he normally plays in goal but she decided to put him up front that match.

She had joked before the match that Ms Dykes would go into labour if he scored.

She said: “Rebecca was overdue and Rylee normally plays in goal, but I thought I’d put him up front.

“We jokingly said she’d give birth if he scored and I think all the jumping around must have done it for her.

“She went into labour but didn’t tell anyone until after the game.

“There was absolutely no scene – it’s never happened to me at a match before.

“We’re fully expecting Rylee to do the rocking baby celebration next time he hits the back of the net.”

Full-time mum Rebecca, who lives with boyfriend Terry Allen, 21, added: “I was six days overdue and I actually thought the match might help.

“I had been waiting patiently but I thought a bit of excitement might help the baby along.

“Rylee scored in the first 10 minutes of the game and I was jumping around punching the air. It was a great finish into the bottom corner.

“Then these pains started and got worse as the match went on. I thought she was just moving around awkwardly at first.

“Then I started having contractions but I wanted to watch the end of the game. It was an good match and I always like to cheer him on.

“I actually went home after the match and my brother in law Pete took me to Kettering General Hospital at about 7pm.” 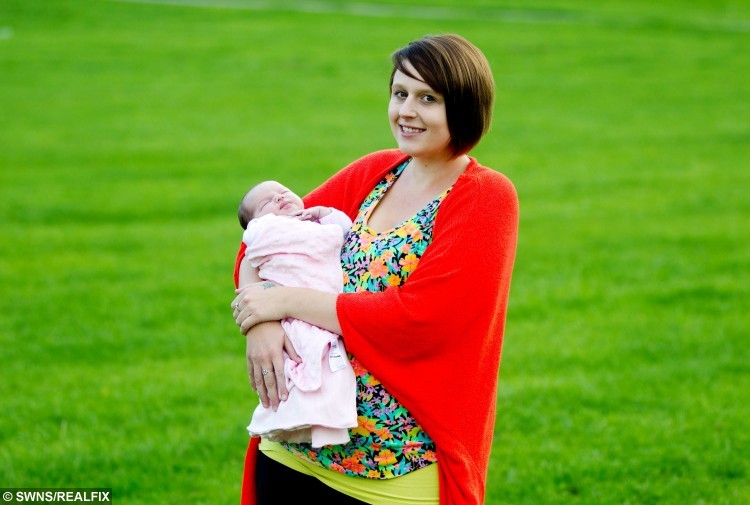 “My waters broke three minutes before I gave birth at around 11.53pm.

“We both liked the name Harper. It’s the only name that me and my partner could agree on.

“I know it the same as Beckham’s daughter, which I suppose is pretty fitting considering the circumstances.”

“Rylee is such a great big brother. He was really excited. He says: ‘I’ll never forget when I scored my first goal, mum’.

“This is the first season he has played outfield as he has always been a goalkeeper. But I knew he could do a job up front as a striker as he’s good with his feet too.

“It is nice to know he had a hand in bringing his little sister into the world – just by scoring a goal.” 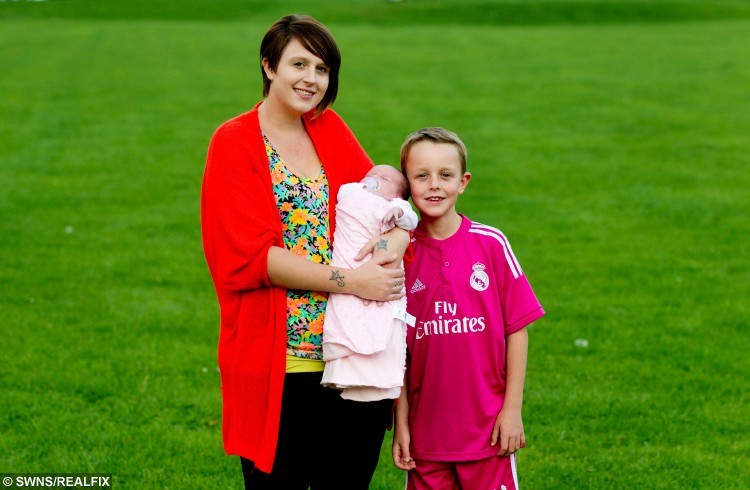