A pregnant woman with just weeks until her due date lost her baby when she crashed and her car flipped – after hitting a pothole.

Nicole Chahal, who was 34 weeks pregnant, lost her baby and almost died when her car overturned in a country road on a winter morning and ploughed, upside down, into a tree.

The 32-year-old’s pelvis was shattered, her femur snapped in half, she suffered broken ribs and numerous other bones.

She was rushed to hospital and had an emergency Caesarean section but tragically her child was stillborn.

Nicole spent 11 weeks in hospital recovering, and she believes that icy conditions and a wide pothole caused her accident, on her own street, on February 8 this year.

The mum-of-three said: “That morning I dropped my children to school and then I bought my son’s pushchair – it was one of the last things I needed to get before he was born.

“The pushchair was in the car when I crashed.

“My husband said he had a bad feeling when I wasn’t replying to his messages and started to walk down the road.

“Then he heard the helicopter and saw the fire engines and ambulance.

“My car was completely wrapped around the tree, it was half the size.”

Nicole was cut out of the car and airlifted to hospital.

She said: “I don’t remember much but I have flashbacks.

“I remember being in the helicopter, being really cold and feeling really scared. I had no idea what had happened or where I was.

“The next thing I remember is waking up in hospital. There was a woman at the end of my bed and she said ‘I’m so sorry, but the baby doesn’t have a heartbeat’.

Nicole, from Hildenborough, Kent, had to have a Caesarean to get the baby boy out, but sadly he did not survive.

She was hospitalised for 11 weeks due to the severity of her injuries.

“My femur snapped in half and my ribs, elbow and wrist were broken.

“The steering wheel of the car was knocked clean off.

“I was in intensive care for three days and confined to bed for seven weeks because my pelvis just wasn’t healing.

“Now I’m learning how to walk again with a walking frame.

“My youngest didn’t even recognise me.

“I used to be happy and pregnant but had turned into a puffed up woman who wasn’t pregnant anymore.”

Nicole and husband Don had even decided what they were going to call their unborn son – Arlo.

She said: “It was traumatic – so bad mentally. I couldn’t get my head around it. I still can’t.

“We’re moving at the moment and have to go through all the things we bought for him.

Her husband Don and children has been devastated by the loss.

“He only lost his brother five years ago to a motorbike accident – then four years later he loses a child.

“He’s Canadian so doesn’t have family over here, he looks after all of us by himself.

“My youngest one knew I was pregnant, he was so excited, kissing and lying on my tummy all the time.

“But it’s my oldest, my daughter, who has taken it the worst. She understands death.”

Nicole said police believe the pothole and icy conditions were contributing factors in the accident.

She said: “The police report says that they believe the ice and pothole were factors in the accident.

“I know the pothole, I remember dodging it all the time. But that morning I didn’t see it.

“There’s a drain on the road, that always pushes out water instead of taking it off the road.

“The man who found me said that day the drain was blasting out water. I think what happened was that the pothole was filled with ice and the wheel fell into it.

“It was minus 6C – unbelievably cold.

“The police said there was a chunk out of one of the hubcaps, which led them to believe it dipped into something.”

Hildenborough residents have launched a petition to make the road safer in the wake of the tragedy.

Solicitors Moore Blatch are helping Nicole and her devastated family with their compensation claim against Kent County Council.

Associate Solicitor Amandeep Khasriya said: “We want to see accidents like this being prevented in the future and one of the ways to do this is by introducing a Quiet Road status to Nizels Lane.

“The local community has come together and submitted a petition to Kent County Council.

“Currently, 46 out of 58 residents have signed the petition.

“The petition aims to introduce a reduced speed limit of 20mph to Nizels Lane and other traffic calming measures such as preventing HGV’s from driving down the lane.

“Kent County Council is positively engaging with us and this is an ongoing investigation.

“We at Moore Blatch are working closely with Nicole to ensure that she gets the rehabilitation she needs in order to recover from her injuries which is really positive.”

A Kent County Council spokesman said: “We sympathise with residents regarding the incident earlier this year.

“As a local authority we have to make tough decisions on where to make changes to roads across Kent.

“Subsequent investigations on Nizels Lane found no defects on the road and there have been no previous incidents prior to February 8.

“It is important to note that we have to be able to directly mitigate against crashes through engineering.

“KCC has to prioritise its remedial works where specific mitigating schemes have been identified to solve a particular road safety matter.”

A neighbour of a woman who lost her baby after crashing on a country road has said there are “multiple potholes in the area”.

Nicole Chahal, who was 34 weeks pregnant, lost her baby and almost died when her car overturned in a country road on a winter morning and ploughed, upside down, into a tree.

The 32-year-old’s pelvis was shattered, her femur snapped in half, she suffered broken ribs and numerous other bones.

She was rushed to hospital and had an emergency Caesarean but tragically her child was stillborn. 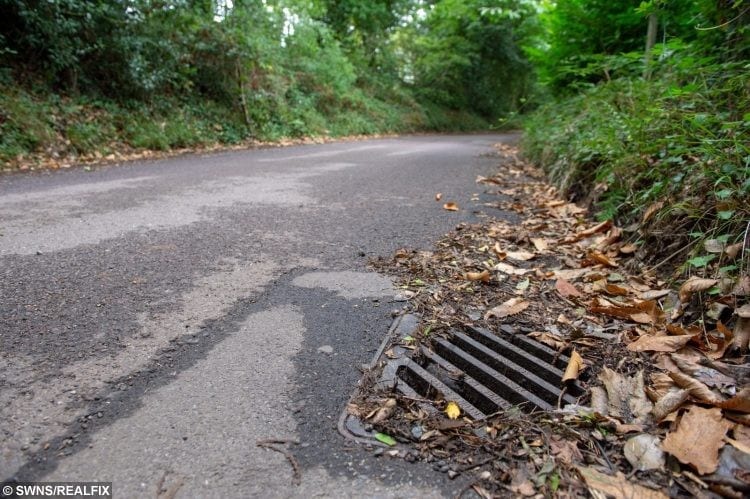 Nicole’s neighbour, a 36-year-old pilot who did not wish to be named, said: “We live a little bit down the road and heard the helicopter coming in. I knew it was serious when I heard that.

“We received a letter in the post from her husband about the accident and that it had happened after she hit a pothole.

“I don’t know that particular one but there are multiple potholes in the road. I suppose that comes with living in the country.

“But if the pothole caused the accident then something definitely needs to be done.”

He added: “It’s very sad what happened – we wish the family all the best.”

“The decision was taken that no further police action was required.”