Kristie Sita with her amputated arm.

A dancer poses for a gym selfie to show off her toned biceps – just hours before her hand was ripped off in a freak boating accident.

Kristie Sita was relaxing with friends on the water when a rope attached to an inflatable wrapped around her wrist and severed her hand when she suddenly jerked backwards.

The fitness fan, 21, briefly fell unconscious and woke in the water surrounded by blood.

When she raised her left arm to motion for help, she was horrified to see that her hand was missing. 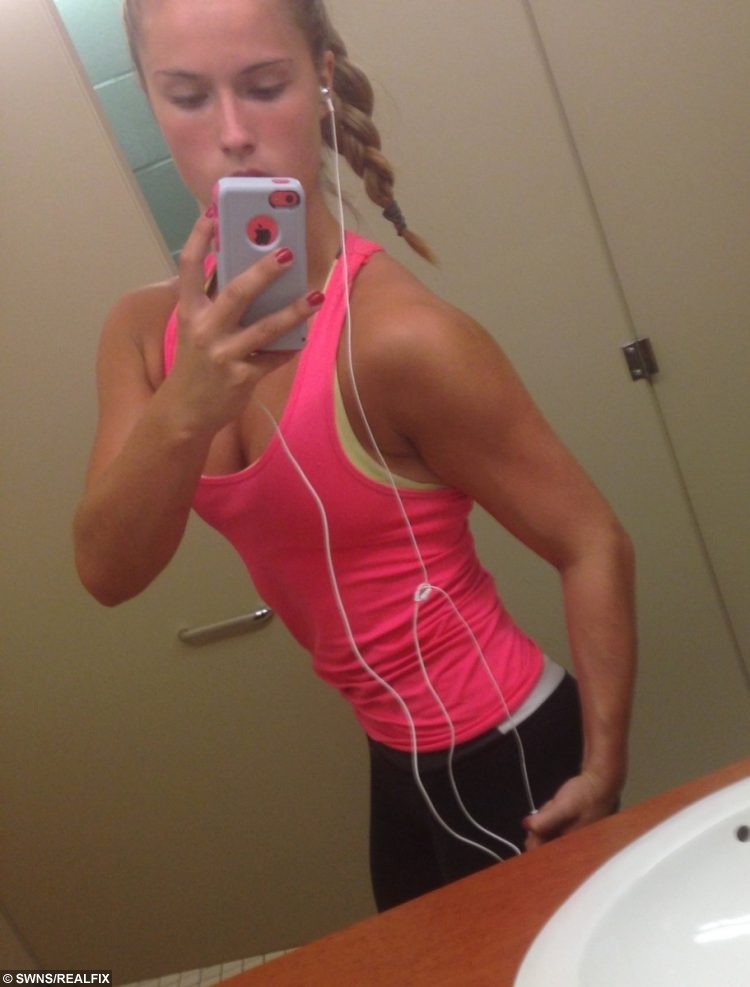 Kristie, of Vancouver, Canada, was airlifted to hospital where her wound was sealed by wrapping the remains of her palm around the stump.

The severed hand was later found in the water, still entangled in the rope.

But amazingly, Kristie says the accident has changed her life for the better and she has gone on to land top dancing roles and amassed 100,000 social media followers.

Reliving the ordeal, she said: “I kept thinking it was a nightmare. It couldn’t be real.

“In five seconds my life had changed forever.”

Kristie graduated from high school in June 2014 and five days later she celebrated by going tubing with friends in Ruby Lake on the Sunshine Coast in British Columbia, Canada.

Tubing is an activity where thrill-seekers skid across water on an inflatable donut called “a tube”. 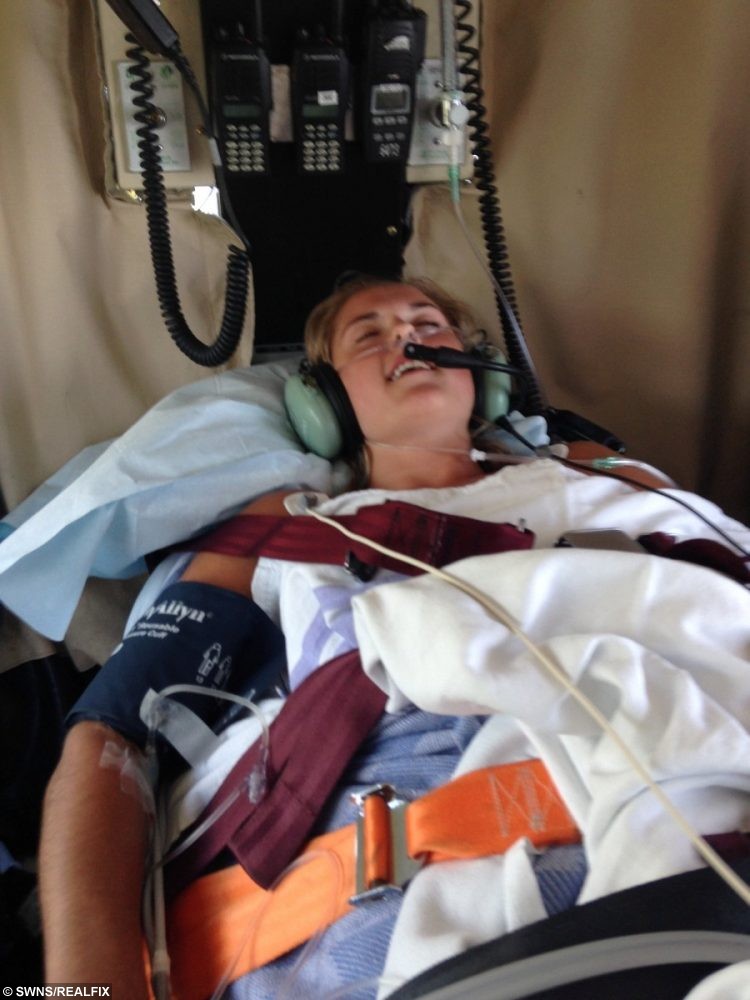 Kristie said: “Ever since I was a young girl, dance was the only thing I wanted to do.

“I graduated from high school a year early so I could move to Vancouver from my home town of Sechelt and pursue dance professionally.

“In the morning, my friends and I headed to the lake to go tubing for the day.”

But beforehand Kirstie went for a work out, as she did every day, seven days a week, to keep her body in tip-top condition for her dancing.

She took a picture of herself in the gym bathroom mirror, flexing the sculpted bicep of her left arm.

It would be the last photograph of her left hand. 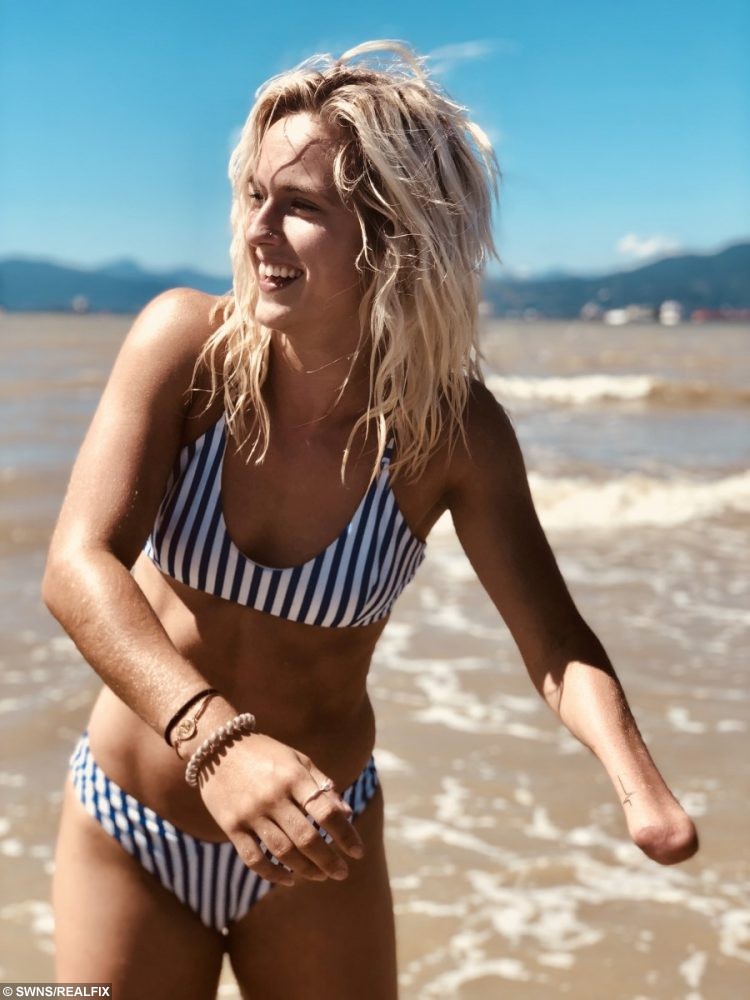 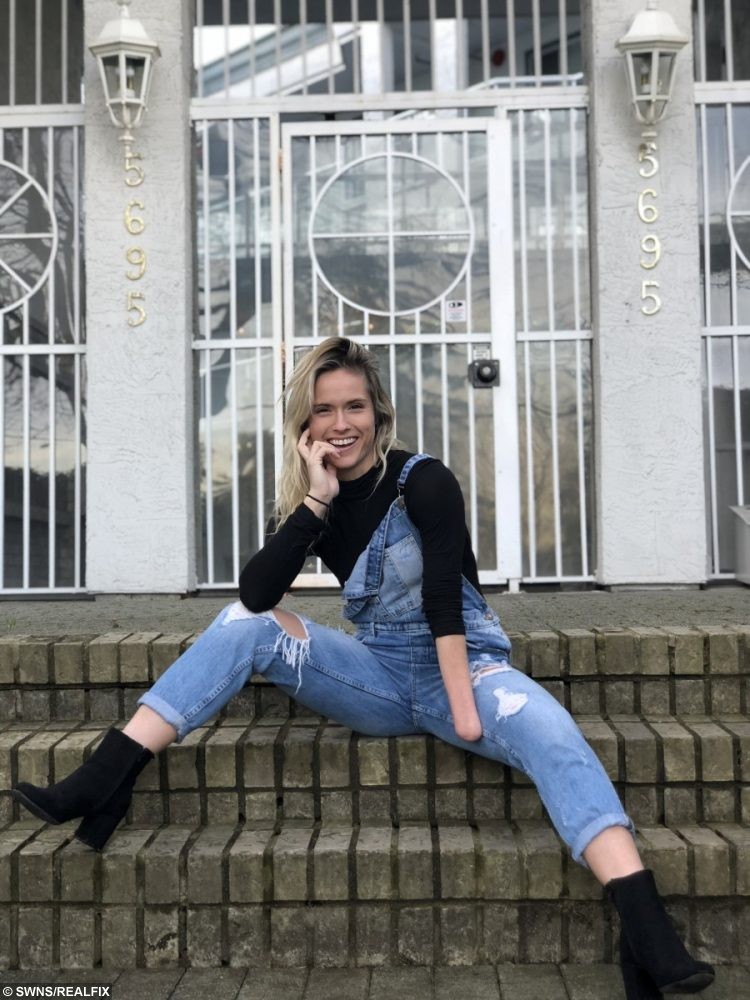 She said: “Around noon, we were heading to meet another boat.

“The tube was resting on the back because it was too big to fit.

“My initial reaction was to reach out to grab the rope.

“The next thing I remember, I was in the water surrounded by blood.

“At that point, I went into survival mode.

“I was treading water.

“My friends pulled me back into the boat.” 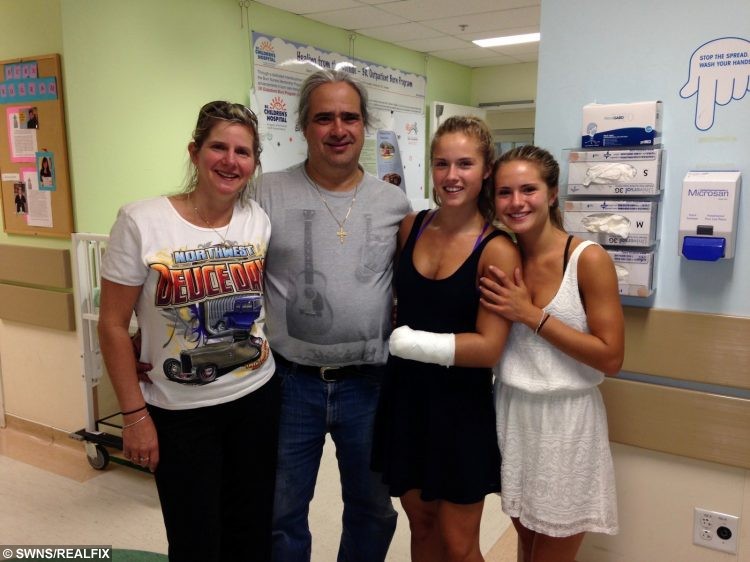 Kristie was taken to the nearest helicopter launch in an ambulance and she was then flown to British Columbia’s Children’s Hospital in Vancouver.

She was rushed into surgery where she only had two questions.

“I looked at every surgeon and I asked: ‘Am I going to die?’

“They said I wasn’t.

Even as she was put under, Kristie knew that she was going to be alright.

“I knew that God had a plan for me and that everything would be fine,” she said.

Emergency workers had returned to the lake and had found Kristie’s hand, still tangled in the rope. 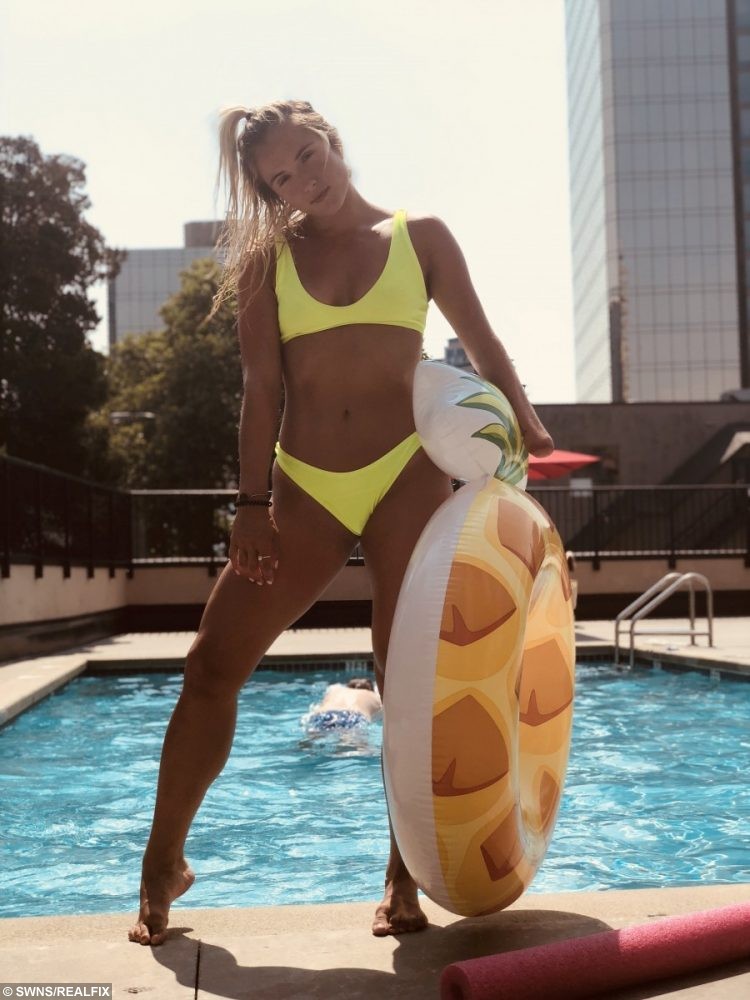 She said: “They went back to the tube and found my hand, still attached to the rope.

“They put it in a cooler and it came with me to the hospital.

“But they didn’t reattach it.

“They were worried it would be paralysed or there could have been complications and I would have to get it re-amputated.

“Knowing that I was a dancer and an athlete, doctors decided to leave me as an amputee as they knew they could save so much more of my arm doing that.

“My arm was sewn together by wrapping my palm around the wound.

“My ligaments and muscles were torn around my shoulder.

“They moved some of my muscles down so that my arm could be fully weight-bearing.”

Kristie’s dad Danny, 57, a restaurant owner, her mom Angie, 55, a real estate agent, and her sister Rosie, 23, a shop manager, were horrified to see Kristie without her hand.

She said: “It was my family’s worst nightmare.

“I could see in their eyes that they were worried about my future. 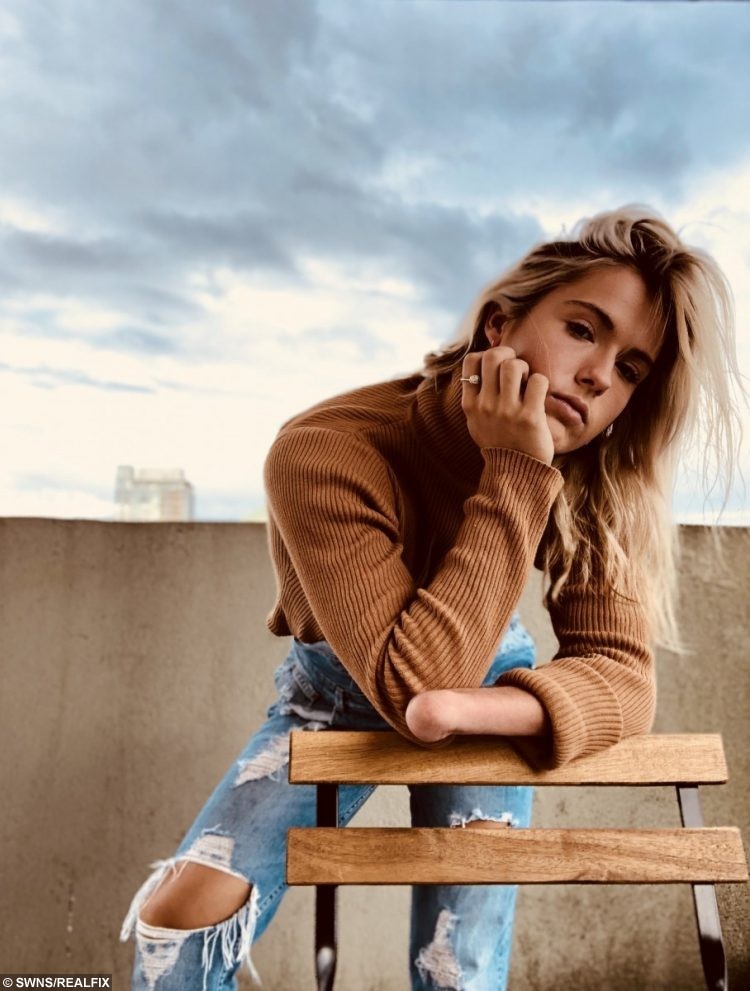 Just two and a half months after her four-hour operation, Kristie was training in the gym again.

She said: “I had two months straight of meeting my surgeon, seeing counsellors, intense physical therapy and pain medication.

“After the first month I went to the gym for the first time with a massive bandage.

“I pedalled on the bicycle because it was the only thing that I could do.

“I needed to sweat again.

“I started dancing in my basement.

“I was back in full on training after two and a half months.”

Her professional dancing credits include roles in Disney’s Descendants and the web series Sacred Lies.

Astonishingly, Kristie insists that if she had the choice, she would still reach for the rope that day on the lake. 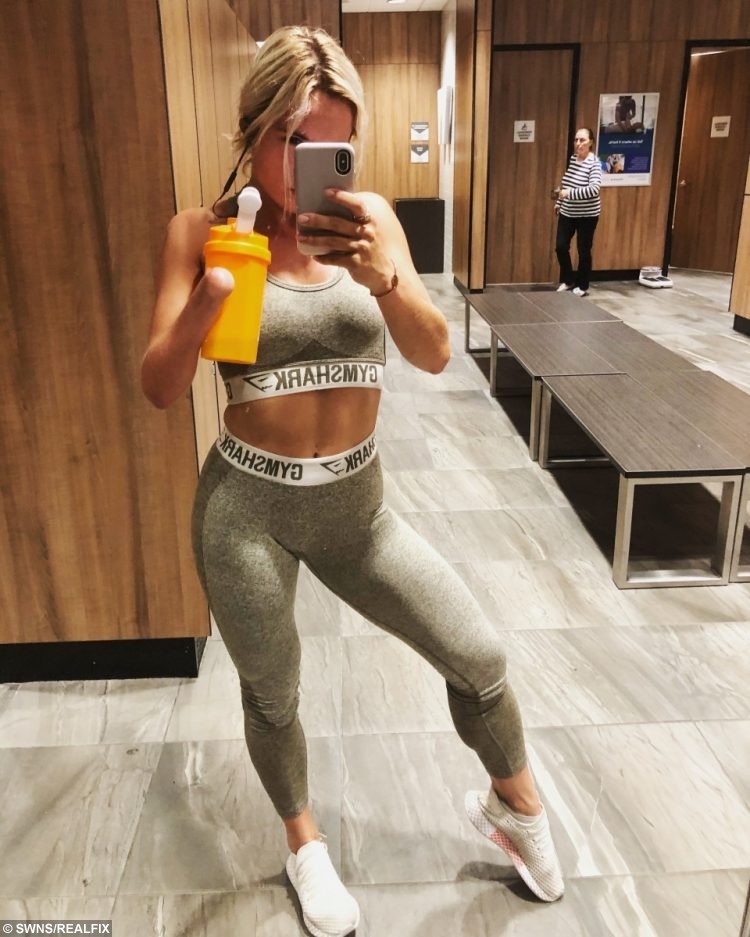 She said: “If I had the chance again, I’d still reach back for the rope.

“Being an amputee has brought so much love and purpose into my life.

“It’s made me notice the people who stuck with me through the hard moments.

“When you love something so much and it’s almost taken away from you, it triggers a new passion that makes you work and fight hard.

“When you go through something like that, you know you don’t have endless time.

“I just need to love people like it’s my last day.

“When I look at my arm, missing a hand, I see strength and courage.

“Just because I don’t have a hand doesn’t mean I’m unable to do anything I want to do.”