Libby Tucker(L) who cut her long hair for cancer sufferer Aiden Selleck(R). See MASONS story MNHAIR; A Iovestruck nine-year-old who dreams of being Rapunzel is cutting off all her hair to help her boyfriend survive cancer. Little Libby Tucker-Spiers and Aiden Selleck are inseparable and have told their families they will one day marry. Libby, who has global developmental delay and a growth problem, was devastated when seven-year-old Aiden was diagnosed with a rare kidney cancer.

A lovestruck nine year-old who dreams of being Rapunzel has cut off her long blonde hair – to help her young ‘boyfriend’ fight cancer.

Libby Tucker-Spiers was devastated when seven year-old Aiden Selleck was diagnosed with kidney cancer in April.

The brave youngster had to have a massive tumour removed and is on his fifth week of a 27 week-long course of gruelling chemotherapy.

When Libby went to visit Aiden, who she says is her future husband, in hospital she was gutted to see his lovely curly blonde locks had gone.

The schoolgirl, who has global development delay and a growth problem, immediately insisted she wanted to cut off her hair and give it to her boyfriend.

When her mum Charlie told her that wasn’t possible Libby arranged to have it cut and donated to the Little Princess Trust charity which makes wigs for child cancer patients.

She had 11 inches taken off on Tuesday and has now started a fundraising campaign, with the help of her mum and Aiden’s mum for an ‘after chemo’ party for Aiden.

The proud mums, from Milton Keynes, Bucks., say inseparable Libby and Aiden “love each other very much” and tell them they plan to get married and have three children.

Charlie Spiers, 29, said: “I took her to see him in hospital after his 1st bout of chemotherapy. He was asleep and as white as a ghost – he didn’t look like her Aiden.

“She was shocked at how poorly he looked.”

“She was really upset to see that all his lovely curly hair had fallen out. That was what she was most shocked about.

“She immediately insisted she would cut off her hair and give it to Aiden.”

“We explained that this wasn’t possible, but she insisted she wanted to do something.

“Her biggest dream has always been to grow her hair so it was as long as Rapunzel’s. But nothing stopped her having it cut for Aiden.”

Charlie, a full-time mum-of-four, added: “Libby is always by his side. They may be young but they adore each other. lt’s a real love story.”

Aiden’s mum Clare, 33, said: “Libby and Aiden still spend a lot of time together and are having a sleepover.

“Aiden said when he is better he wants to have a big party with all his friends and family there. He already has a date for the party – Libby.”

Aiden was diagnosed with a kidney cancer called Wilms Tumour after going to hospital with a badly inflamed tummy.

He was treated in Oxford and is having his chemotherapy at Milton Keynes Hospital.

Mum-of-three Clare, a deputy manager at a college, added: “Aiden has coped really well. The nurses told him to call his scar a shark bite so he is quite happy with it now.

“It is like a war wound he can show off. He is so resilient.”

The family are sending Libby’s hair and a £350 donation to Little Princess Trust and the rest will be spend on Aiden’s ‘after chemo’ party at the MK Dons’ football stadium.

Aiden wants all his family and school friends to celebrate the end of his treatment on December 30, but it costs £15 a head.

Charlie and Clare want to raise awareness of the signs of childhood cancer and urged parents to take their children to the doctors if they notice anything unusual.

Around 90 children are diagnosed with renal tumours every year in the UK and 90 per cent of these cases are Wilms’ tumour. The cancer has a good survival rate. 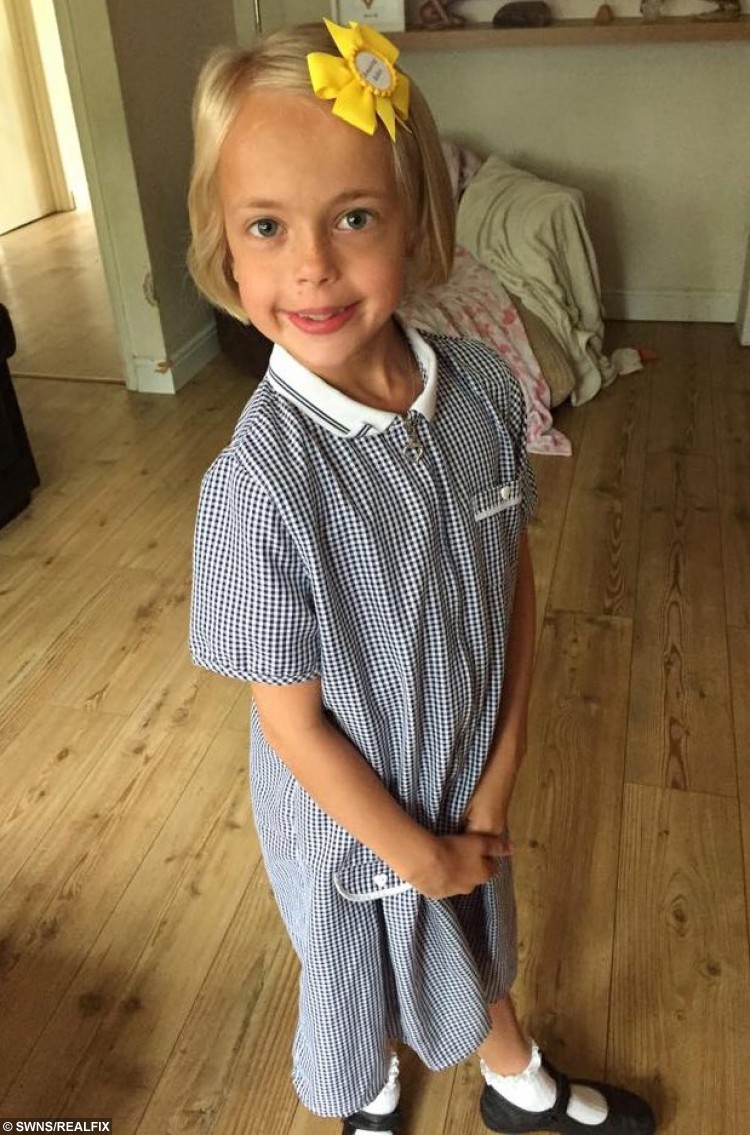