A young woman with anorexia has blasted the NHS after being turned down for treatment- because she was deemed ‘too fat’.

Hannah Brown, 26, has previously battled the eating disorder twice and so spotted the signs it had returned earlier this year.

She went to her GP for help but was told she must wait nearly three months to be seen as she hadn’t lost enough weight.

Hannah asked not to reveal much weight she lost, due to it being triggering to other people.

However shocking photos show her at her lowest, with her looking drained and her bones showing.

Hannah said: “I felt really let down by the NHS and I know how hard it is to suffer alone.

“I was shocked. If I wasn’t in such a strong position with my support network I could have lost the weight just to get in.

“I was told by three people that my weight wasn’t dropping so I was not critical enough. In other words I wasn’t skinny enough.

“I just don’t want people to have to go through what I did, because it is really hard.”

Anorexia is a type of eating disorder, that makes people want to get their body weight as low as possible.

Around 1.6 million people in the UK are affected by an eating disorder, with 4% of those dying due to the illness.

Hannah asked not to reveal much weight she lost, due to it being triggering.

However shocking photos show her at her lowest, with her looking drained and her bones showing.

Hannah first realised she was suffering from the eating disorder when she was 19 while studying law at the University of Hertfordshire.

She said: “I just wanted to lose weight but then I became obsessed. It came to the point where I was going to die. And I remember the Doctor telling me that if I didn’t take the help he was giving me I would die”

Hannah lost six stone and had to be hospitalised twice – for doctors to watch her every move and feed her.

She said: “It all started when I tried out a new diet. Little did I know that it would change my life forever.

“I started eating healthily and then started exercising. It got to the point where I was just so unwell and I didn’t really realise it.

“It then got to the point where I was living off an apple and a bowl of soup, and then doing an hour of running everyday.

“I think I was probably suffering for at least two years before I realised what was going on.” 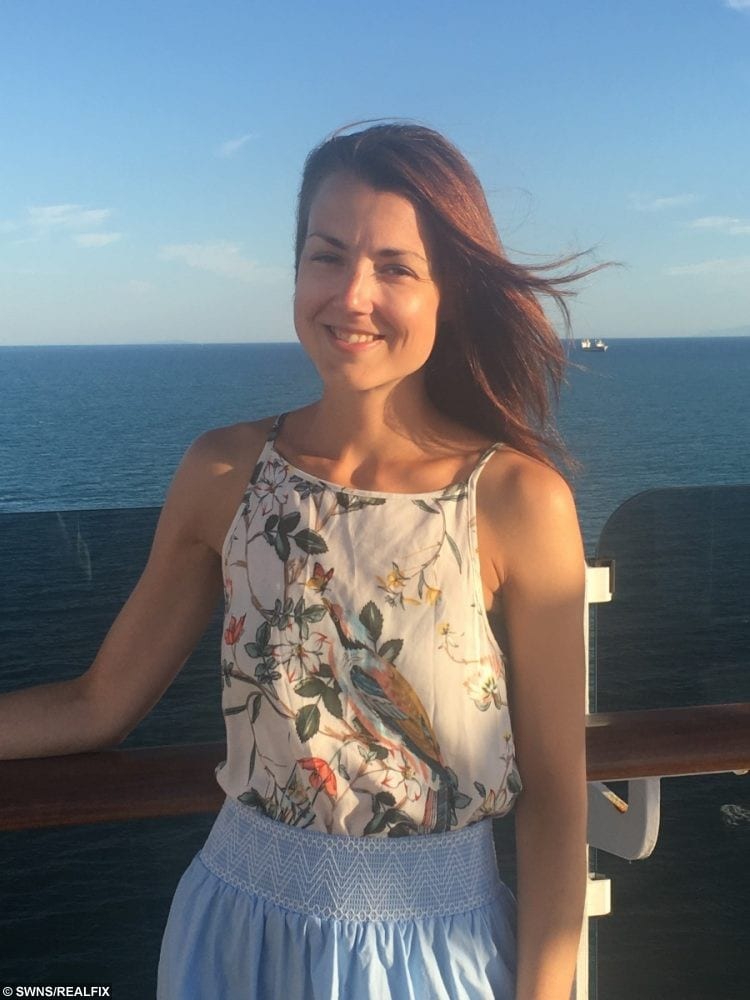 After weeks of emergency treatment from her doctors Hannah was transferred to the Bethlam Royal Hospital in South London for more specialist care.

There she underwent treatment for her eating disorder – before being weighed every day.

Hannah said: “I would get woken up at 6:30am and would have to get weighed. Part of you would want to have put on weight, but the other half hoped you hadn’t.

“That was a really tough battle to overcome.”

“It was nice to be around other people that had been affected by it.”

Hannah persuaded the unit to discharge her in April but found herself hospitalised again two months later when she was admitted to Addenbrooke’s Hospital in Cambridge.

She said: “My first time in hospital removed all my freedom and responsibility, it was invasive and utter hell.

“But my experience in Cambridge unit very much pushed patients to make their own decisions, portion their own breakfasts and yes, even cut their own sandwiches.

“It sounds silly but these things made a massive difference to me, I wasn’t just a weight but my recovery was dictated by what I felt I was able to achieve.

“Sessions were dynamic and the goal was life not weight gain.”

Hannah, who now works as a restaurant supervisor, was later discharged for the second time, before getting a job on a cruise ship in October 2016.

While working on the ship as an art consultant, she recognised signs of the eating disorder returning and made the decision to return home to Langford, Beds.

Hannah said: “There wasn’t obvious signs to start with, but after a while I started obsessing with food and exercise.

It was after getting in touch with the Bedfordshire and Luton Community Eating Disorder Service in an attempt to stop her relapse that she suffered the heartbreaking set back.

Hannah went on to say: “It felt awful to be told that I would have to wait 2 months for treatment. As someone that has suffered from anorexia lots of time, I know that you can’t wait two months for help. You need it right away.

I just felt really angry and let down that they could push me away after I was begging for help.”

After being put on a two month long waiting list, she decided to gain help from a private service called Insight Eating.

“People like me shouldn’t have to pay for help that needs to be provided. It’s not fair.”

Hannah now gets one on one treatment, where she can skype professionals anytime of the day if she feels like she is having eating disorder behaviors.

The Private appointments can cost up to £50 per session, which can become costly if you are desperate for help.

She said: “It annoys me so much that treatment like I think I have to pay for. This should be available on the NHS.

In a bid to help other sufferers, Hannah has now set up the website ‘An ear to hear’ to help others looking for support to deal with the disorder.

She added: “I want people to have someone to lean on.

“Thankfully for me I have my mum and my brother, who without them, I would be dead.

“But some people don’t have that, so I really wanted to create a website that allows me to help others.”

“The service contacted Hannah as soon as it was aware of the error and she was offered a priority appointment for the following week, which she declined.

“Prior to the offer of that appointment Hannah had contacted the service and staff, who in explaining clinical criteria for evaluating how to prioritise patients, have unintentionally caused upset.

“Patient care is of paramount importance to the Trust and it apologises to Hannah for any distress caused.

“The Eating Disorders Service will also consider how it communicates with patients in the future to avoid any similar situations.”

The Eating Disorders service has now reached out to Hannah admitting they had have made an ‘error’ and are now really keen to work with her on the launch of her website.

Generous Strangers Raise Over £2,000 For Homeless Man In Just 48 Hrs After Belongings Where Stolen

Generous Strangers Raise Over £2,000 For Homeless Man In Just 48 Hrs After Belongings Where Stolen