A ripped pensioner came back from cancer and a new hip to come top of a national contest – for bodybuilders.

Determined David Brice overcame huge adversity to take the title – waking up at 5.30am, six days a week – at the ripe old age of 70.

The septuagenarian is also one of the country’s oldest personal trainers, after spending the last 11 years at his local gym, helping people less than half his age shed unwanted pounds.

He came first in the 70 and over category at the British National Bodybuilding Federation competition and puts his continued passion for fitness down to his prostate cancer diagnosis, which he is now in remission from.

David, from Felbridge, West Sussex, has even carried on working as a personal trainer at K2 Crawley leisure centre, for 11 years, throughout his ordeal.

Despite lifting weights from the age of 16, back in 1962, the life of an older bodybuilder is not beyond suspicion, as he had to pass a lie detector test as judges wanted to be sure competitors were not taking performance enhancing drugs.

David said: “The organisers take the competition seriously for people at my age as well as in the younger categories because they are determined to eliminate any cheats.

“We were all strapped up to polygraph machines and had to take a urine test to make sure we weren’t misusing any drugs or hormones.

“The test was measuring changes to my blood pressure when I was asked questions such as ‘is your name David Brice?’, ‘have you ever lied to a friend that had serious consequences?’ and ‘have you ever taken any performance enhancing drugs?’

“I first got into bodybuilding at the age of 55, before that I had been a weightlifter, and it has taken time for me to feel comfortable on stage in what can only be described as a posing pouch.

“I feel shy about standing up on stage to pose in different positions where every bit of fat on your body shows up.

“And because it is the done thing, my wife gives me two spray tans in the hotel room before the show.”

But even cancer and hip replacement surgery after a freak accident, breaking his leg, did not stop him from continuing to train for the national competition. 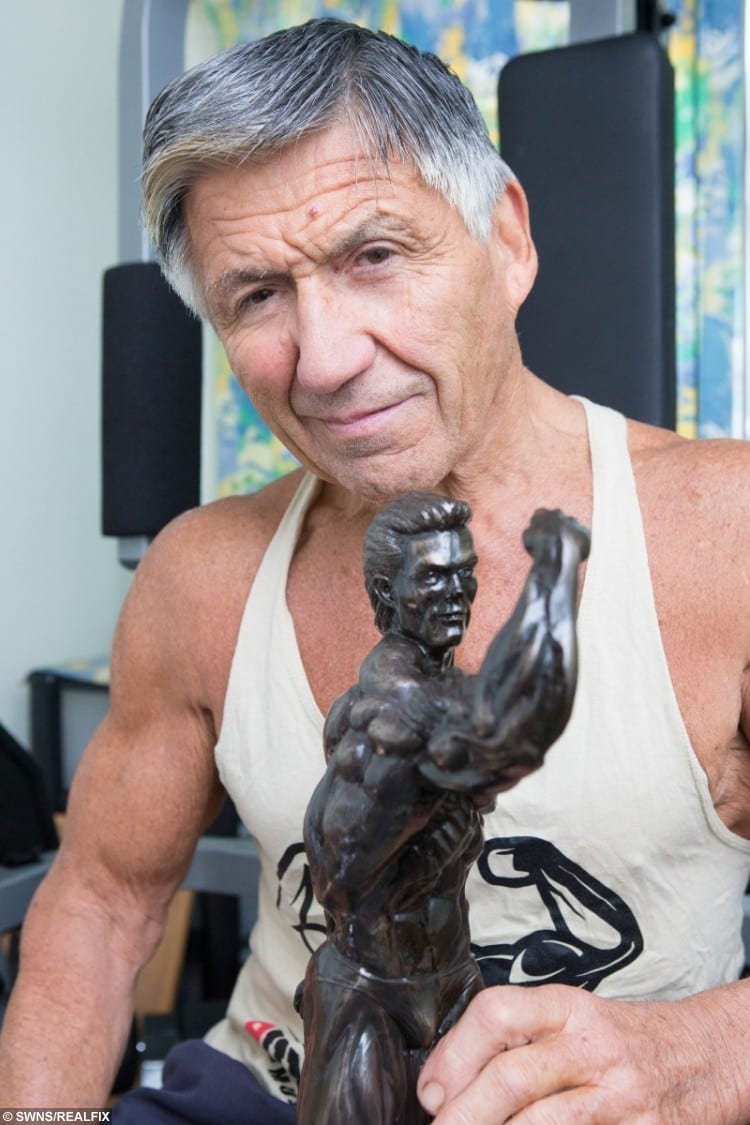 David said: “Thankfully the cancer was caught very early and I started treatment in October 2015.

“I always had it set in my mind that I wasn’t going to continue my exercise programme alongside my treatment but when I broke my femur in March I thought this year’s competition would be a write-off for me.

“It was a complete accident. A foam roller had been left on the floor and I tripped over it. I immediately heard my thigh crack and I had to undergo hip replacement replacement surgery.

“For two weeks I was really down because I was bed bound and unable to train at all. I’ve struggled to give myself one day off a week from the gym, let alone going weeks without exercise.

“I pulled myself together through and got back into my small gym at home, moving myself into positions to work on my upper body even when I couldn’t move my leg.”

The pensioner has adapted his workout routine as he has got older, to focus on the number of sets and repetitions he completes, compared to the heavier weights he used to lift.

He said: “My squat record was 272.5kg when I was 30 but I don’t focus on the size of the weights at all anymore because my body just couldn’t manage it.

Muscular men amongst the older generations battling it out in bodybuilding competitions is rapidly on the rise, according to the winner.

David only had one competitor when he first took part in the over-60 contest but this year fought off six others to take the title.