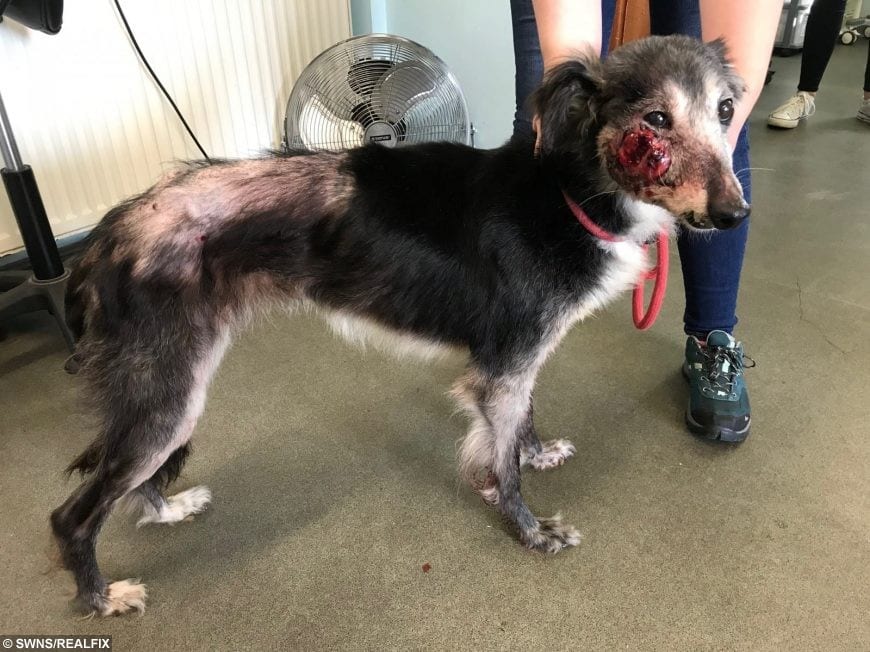 The RSPCA are hunting a cruel yob who dumped a dying dog on the top of a remote MOUNTAIN.

An off-duty police officer spotted the emaciated female lurcher-cross which had a cancerous tumour growing on its face.

Despite rushing the dog to a vet, it was put to sleep.

The RSPCA have released graphic photographs of the dog before it died in a bid to catch the culprit.

RSPCA Inspector Kate Parker said: “It is despicable to think that someone left this dog suffering with such a horrific wound and did not seek urgent treatment for her.

“Then to intentionally dump her somewhere so remote knowing she would probably suffer a lingering death and be alone in her hour of need is beyond belief. It is such a callous act.

“The dog was obviously frightened, hungry and must have been in a lot of pain with tumour but was so sweet in her nature – it is so sad.

“I am keen to speak to anyone who may recognise who this dog belonged to or saw anything suspicious in the area at the time when she was found.”

The dog was discovered lying in an isolated area on top of a mountain in Glyn Ceiriog, north-east Wales on August 28.

The off-duty cop took the dog to nearby Border Veterinary Centre in Oswestry, Shrops.

Staff discovered the ulcerated tumour on the side of the dog’s face had grown
into the upper jaw bone.

The tumour was so severe the vet decided the kindest thing to do was to the dog to sleep to end her suffering.

Dave Martin, clinical director at the vets, said: “This was a nasty tumour and the dog must have been suffering like this for weeks if not months.

“The dog was emaciated but because the tumour had grown into the jaw she would have struggled to eat. It was so bad it was pushing her eye up. She also had fur loss.

“She was such a sweet dog and in spite of the pain she was in she was lovely with us and also the off-duty police officer who brought her in said the same.

“It is horrific that someone could just dump her in this state to leave her to suffer alone.”

The dog was not microchipped so there was no way of identifying the owner.