Ali Layard, 12, poses for a photo as he recovers from horrific injuries to his legs. See SWNS story SWLEGS; A 112 year old Sexey's School pupil has overcome horrific injuries to leave the cricketing world in a spin. Ali Layard, who is in Year 7, took four wickets in five balls, ending up with six for ten, against an U15 side. Three years earlier, Ali was knocked off a narrow boat and was caught in the propeller, sustaining awful injuries to his legs. He was airlifted to the South West Trauma Hospital, where he stayed for four months and underwent many operations to save and reconstruct his legs. He is now classed as 'disabled' and was only ever expected to be able to walk with a stick and a stiff leg. But the determined Ali was given specialist coaching by Somerset CCC's Paul 'Sid' Lawrence, and help from Sexey's head of cricket Tom Balch, to get back to cricket.

A schoolboy facing a life of disability after his legs were mangled in a boat propellor has made a remarkable recovery to pursue his dream of becoming a cricket star.

Brave Ali Layard, 12, suffered horrific injuries when he was knocked off a narrow boat and got caught in the propeller on Easter Monday 2012.

He was airlifted to hospital where he spent the next four months, six weeks of which were in intensive care.

Doctors managed to save his legs but told Ali, then aged nine, he would probably be disabled for life and it was unlikely he would ever walk without a stick.

The accident threatened to shatter the promise he had shown as a young cricketer when he was due to have trials at district level.

But Ali refused to admit defeat and after numerous operations and extensive physiotherapy he is back displaying his talent, to the delight of his family.

In one of his latest matches – against older under-15 boys – Ali took four wickets in just five balls with his leg spin, ending up with figures of six for ten.

He followed that in his next game with his first unbeaten 50 with the bat.

Dad Andrew Layard, 46, said: “The air ambulance team said it was probably the worst injuries that they have ever had to deal with.

“In the end the prognosis was that he would keep his legs but it would be unlikely he would be able to to walk again without a stick and a limp.

“He defied all prognosis and just kept improving. He was only nine at the time, so I think being young was on his side.

“The professionals have no idea how he is able to to move around in the way he is, to the point where is able to do what he loves – cricket.

“We’re really proud of his latest achievement, that was a very proud moment for us.

“But we’ve been proud of him from the start, and the speed of his recovery is due to his hard work and bravery.”

The horrific accident happened on the Kennet & Avon Canal in Wiltshire and Ali was airlifted to Frenchay Hospital in Bristol by Great Western Air Ambulance.

After returning home to Chard, Somerset, he required months of physiotherapy and hydrotherapy to get back on his feet.

He then had specialist cricket coaching from Somerset County Cricket Club’s Paul Lawrence and also had help from staff at Sexey’s, the state boarding school he attends.

His dad and mum Sophie said they were so proud of the progress he has made.

Andrew, a tour operator, added: “His cricket has come on leaps and bounds, the level of support he has had has been amazing. He’s such a happy little boy.

“He’s always been pretty good and just before the accident he was about to embark on trials for East Devon.”

“He’s always had a love for cricket, when he’s on the pitch he’s at his happiest.

“Last season he started to play a little bit. He couldn’t run so he had a runner and would field right on the boundary.

“He would hardly see any action but he would hobble about and do his best.

“This year he’s been able to do it all himself. Seeing him out there made us all so proud.”

Tom Balch, head of cricket at the £8,925-a-year Sexey’s school in Bruton, Somerset, said: “Ali is a remarkable young man.

“His resilience to come back from such life-changing injuries is one thing but to push himself to such heights of performance is quite exceptional.”

Ali also plays for his local team as well as with his dad and sister Flora, 11, in his back garden. 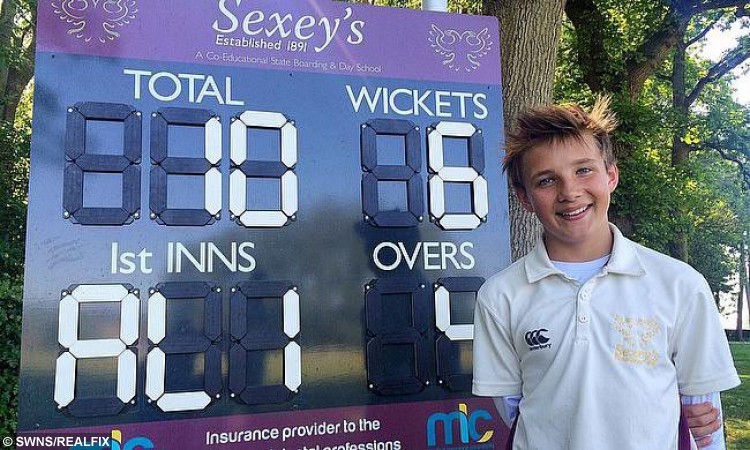 Young horse rider owes her life to a pair of JODHPURS