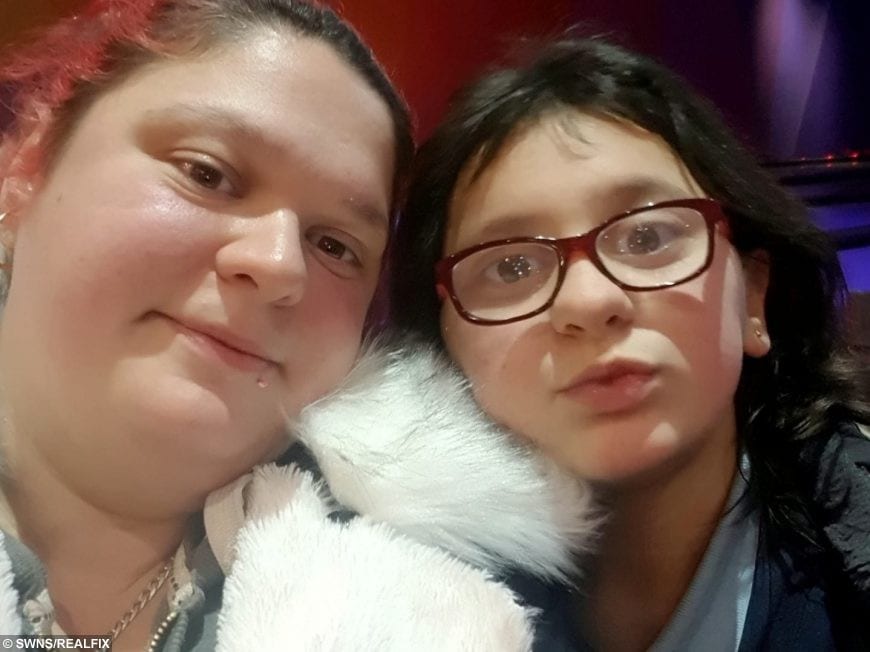 A schoolgirl has been diagnosed with a rare form of cancer which doctors only discovered when she was rushed to hospital with a broken LEG.

Chardonnay Rawcliffe-Roberts, 13, now faces having her full left leg amputated by medics in a bid to stop the cancer spreading.

Luckily, the Ewing Sarcoma in her leg has been caught early and she is scheduled to undergo the high-risk operation in three weeks time.

Chardonnay initially fell over a step while queuing to go on a ride at Blackpool Pleasure Beach amusement park in February this year during a week-long family holiday.

The teenager, from Accrington, Lancs., was rushed to Blackpool Victoria where doctors began treating her for a broken leg.

But while working with Chardonnay, who is a huge Accrington Stanley fan, physicians soon discovered something much more concerning.

Chardonnay was sent to Birmingham Children’s Hospital for further tests which revealed there was an 85% chance that she had cancer.

The teenager was then diagnosed with Ewing Sarcoma – cancer – that can form in bone and soft tissue – on March 16 and began chemotherapy several days later at Manchester Children’s Hospital.

Mum Liz Rawcliffe, 33, a volunteer at a charity bookshop, said: “They have caught it early and it would probably have spread if we didn’t take her into hospital when we did after she broke her leg.

“The cancer hasn’t spread and is just in her leg, so we are hoping the amputation will work.

“I could not make the choice because it’s not my leg. She has made the decision to have her leg amputated.

“She is still happy. She goes through her bad days but even during chemo she still had a smile on her face.

“She will still have to continue chemotherapy until the new year though.”

The mum-of-one added that Chardonnay has taken the heartbreaking news well, adding: “She is a strong girl, we will get through this together.”

Chardonnay first complained of pain in her leg three weeks prior to the incident at Blackpool Pleasure Beach in February.

“She was playing football with friends and they were showing her how to dribble a ball when she fell,” added Liz.

“She complained of pain and a week after that she started limping on it but I thought it was just muscle or ligament damage.”

The teenager spent a week-and-a-half in Blackpool Victoria before being transferred to Birmingham so medics could have a better look at her bone.

“I could tell something was wrong with the way they {Doctors} were acting,” added Liz.

“They told us they had found something they were worried about and that it could be cancer.

“Two weeks later I got a phone call from Manchester Children’s Hospital and I was told she had Ewing’s Sarcoma in her left leg.

“As a mother, you never expect something like this to happen to your own child. We were all just in such shock.

Now, hundreds of people across Lancashire have come together in a bid to raise some money for the family.

Family friend Ann Goodwin is one of five people who have put their all into organising a fundraising day, the proceeds of which will go towards helping Chardonnay and Liz after the operation.

The event will take place on September 22 at Enfield Cricket Club in Accrington.

Organisers are still looking for donations and anyone interested in holding a stall at the event can contact Ann by emailing goodwinann96@yahoo.com