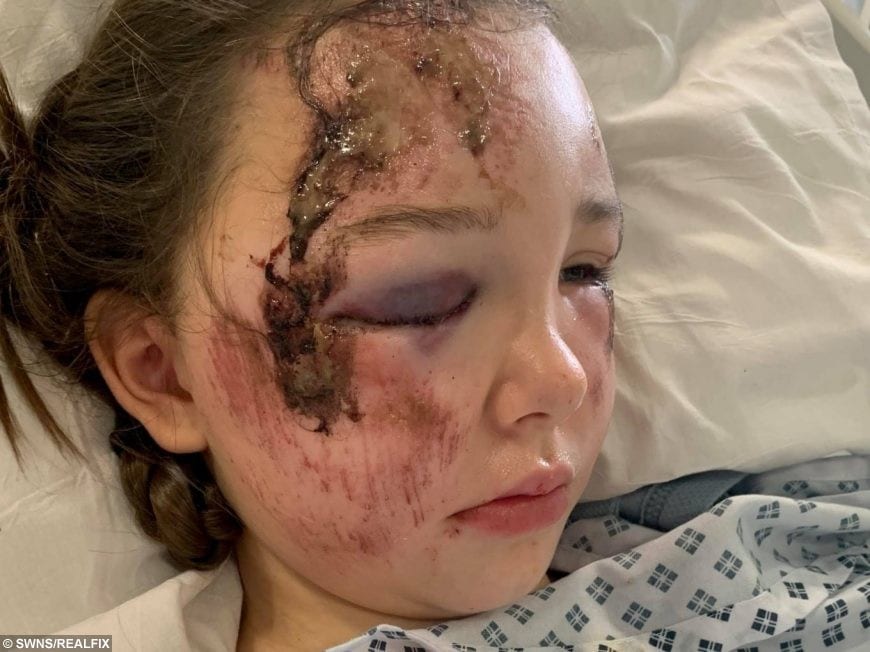 These shocking pictures show the catalogue of injuries suffered by an 11-year-old girl who was hit by a bus while walking to school.

Lainey Matta, better known by her nickname Flump, was hit when she slipped off the curb into the path of the vehicle.

She suffered a number of serious injuries, including fractures to her skull, ribs, collarbone and a number of cuts and grazes.

Lainey was initially taken to Royal Cornwall Hospital after the incident in St Austell on the morning of December 2 before being transported up to Bristol Children’s Hospital via air ambulance.

She returned home to Cornwall late on Saturday night, and her recovery is estimated to take up to a year.

Jade Solomon, the best friend of Lainey’s mother, Vicky Rendell-Matta, has now set up an appeal to support her.

She said: “Flump has received multiple injuries including trauma to the head and eye socket, multiple rib fractures and other serious injuries.

“Vicky would like to say a massive thank you to everyone that was there on the day, who helped keep Flump calm while help came.

“The coach driver for his honesty and kindness; the land and air ambulances, the doctors and staff at the Royal Cornwall Hospital Treliske. Without you guys Lainey wouldn’t be as well as she can be now. You have all been amazing.”

Jade has now set up a fundraiser to help the family with costs so close to Christmas.

“Even though she’s home from hospital now I would still like to raise money for the family,” Jade added.

“They are a family of six and Flump’s mum is due to give birth at the end of the month and she still needs stuff for the baby.

“She has no family down here and her partner’s family all live in Swindon. They both work full-time.

“So with Christmas just round the corner I want to try and get some presents organised for the children as they had to spend the money they had saved for Christmas on expenses up to Bristol and back.

“We have been friends for eight years. We have been through a lot together so are very, very close.”

Jade added: “Flump is still at risk of infection so she isn’t allowed visitors as of yet. Her spleen is now stable however she needs special treatment and equipment at home. Her recovery is thought to take around nine months.

“Thank you to everyone that has donated so far, it means the absolute world.”

« Previous post COQ-UP AU VIN! I Turned My Red Wine Spill Wardrobe Disaster Into A Pink Tie-Dye Sensation
Next article » 'The NHS Saved My Life But This Should Not Be Happening' - Mum With Breast Cancer Treated For Sepsis By A Doctor While Lying On A Hospital Floor