An adventurous schoolgirl has claimed she will be “fuelled by Haribo” as she looks to scale a whopping 2930ft mountain climb.

Sweetie-obsessed Emma Macklin, six, believes that by climbing the Cadair Idris in Wales, she’ll be “closer to heaven” and will be able to reach out and touch her grandmother, who passed away last year from pancreatic cancer.

The youngster, of Stourbridge, West Mids., first became addicted to Haribo when ‘nanna’ Brenda Cadwallader used to sneak her the tasty treats.

The pair were said to be “inseparable”, leaving little Emma devastated when former secretary Brenda passed away last September at the age of 75.

Just days after her grandmother’s death, the super-active schoolgirl, who is a Year One pupil at St James’ Church of England School in Wollaston, West Mids, was determined to take on the ambitious climb in her memory.

She will raise money for the local Mary Stevens Hospice, where Brenda worked as a volunteer for 15 years and where she spent her final days.

Sporty Emma has been taking part in regular seven-mile walks up steep hills in preparation – and even completed an eleven mile bike ride just a week after learning how to cycle.

Mum Lisa Cadwallader, 45, said her and Emma’s construction worker father Mark Macklin, 41, will “line the mountain with packs of Haribo” in a bid to spur their daughter on to the top.

Lisa, who works as a civil servant, said: “It’s a truly amazing thing, what Emma is doing.

“The Cadair Idris is a beautiful mountain and is very close to my family’s heart.

“I climbed it many times as a child with my parents and brother, and it felt a fitting tribute to mom to climb it again as a family with Emma.

“She is incredibly ambitious for a six-year-old.

“Everywhere we go she’s always running around, determined to get as much exercise as possible.

“She’s already done the Race for Life four times with me, and who knows what she’s going to go on and do in the future.

“But like all children, she absolutely loves her sweets.

“Whenever we go walking anywhere, Mark and I always take a pack of Haribo to give her halfway round, to give her that extra little bit of motivation.

“That always seems to get the energy back up!

“I think when she does the climb we’re going to have to line the mountain with Haribo to get her right the way to the top.”

The youngster had wanted to climb the mountain when she was just three-years-old, but was told she was “too young” to consider it.

She will be accompanied by her parents when she takes on the six-and-half mile long walk next month.

Lisa added: “Her and my mum were absolutely inseparable, they would do everything together.

“Whenever Mark and I were off working, she would always stay and look after her.

“The problem was, nanna’s rules were very different to mummy’s rules.

“Most days I would come back home, and Emma would have her mouth stuffed full of Haribo.

“I would look round at mum, but she would stare innocently back and say ‘I had nothing to do with it’.

“They were always playing practical jokes with one another.

“My dad died shortly before Emma was born, and I think she helped put the smile back on her face.

“When my mum was first diagnosed with pancreatic cancer, she set herself the target of seeing Emma start school, and of reaching her six birthday.

“She did see her start school, on September 7 last year, but a few weeks later, on September 22 was admitted to the hospice as a patient.

“She lost her fight during the early hours of September 25 – the day after Emma’s six birthday.

“She achieved every goal she set.

“It would be wonderful to think that Emma can manage to raise enough money to keep a patient cared for in the hospice for 24 hours, as a way of our family saying ‘thank you’ for all the love and care that the hospice provides.” 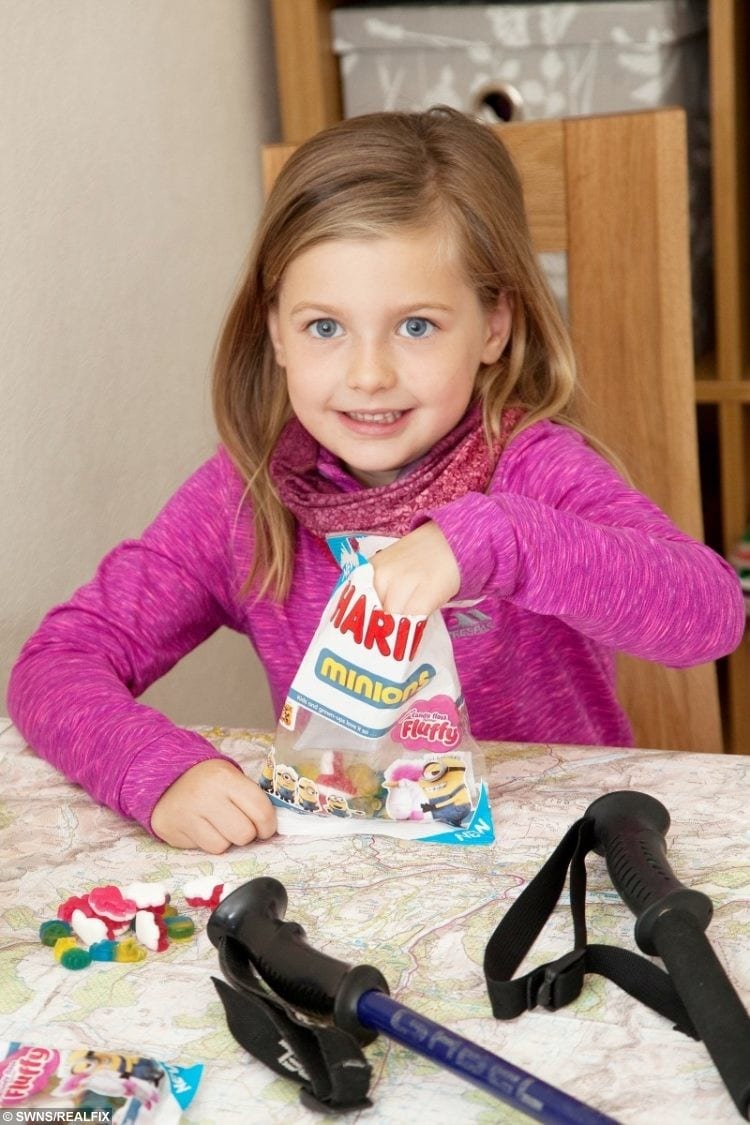 Dan Malin, who works at the hospice, said: “Don’t let her adorable appearance fool you, our kid is tough as nails and she is going to smash this challenge.

“Her Nanna was part of the furniture at the hospice and losing her after such an inspirational battle was very difficult for the team here, and Lisa is a fantastic supporter of ours as well.

“Clearly, doing remarkable things to help people in need is going to run in the family.

“We’ve got absolutely no doubt that this incredible little girl will make mincemeat of her mountain, and we’re just so proud of her. We know her Nanna would be too!”

So far Emma has raised over £600. Her donation page can be found at: justgiving.com/fundraising/Emmamac6