Still not worried about Giant Hogweed? You will be after this

Tracy Brookes aged 42, from Barnards Green, Malvern. A mum is one of the latest victims of the hogweed plant to emerge in recent weeks, and says it was the "worst pain" she'd ever felt in her life. See NTI story NTIHOGWEED. Tracy Brookes's arms and hands flared up in painful rashes and inch high blisters, and although she is now over the worst of it it can take several years to heal completely. Mrs Brookes, of Malvern, Worcestershire, said: "I am still suffering with it, it's not so painful anymore, but more itchy now. The scars are starting to be prominent. It was horrendous, absolutely awful. When the rash first came up, it was really painful. It was an excruciating burning sensation, and it felt like I had really bad pins and needles. At their peak, the blisters stood an inch high off my arm, and I had a lot of them. They were painful and full of fluid. It was really scary. It was the worst pain I have felt in my life."

A mum-of-three suffered horrific third degree burns which caused the “worst pain of her life” after brushing against a Giant Hogweed while walking her dogs.

Tracy Brooks, 42, was taking her two labradors for a walk in the countryside near her home and came into contact with the toxic weed along an overgrown footpath on May 2.

Within 24 hours she had bright red burns and blisters on her hands and forearms up to an inch high – but when she went to see her GP they told her it was impetigo.

Tracy returned to her doctor two more times before finally being referred to a dermatologist at Kidderminster Hospital who told her she had Giant Hogweed poisoning.

Accounts administrator Tracy, from Malvern, Worcs., urges other people to be more aware of the “evil” plant, which has plagued Britain in recent weeks.

She said: “I had never even heard of the plant until I was given the diagnosis.

“I walk my dogs every day and I live in a very rural area. I quite often walk down overgrown footpaths and I sometimes brush up against plants and think nothing of it.

“My doctor told me it was impetigo at first but when I went back two more times they told me I needed to go to A & E.

“But I hate hospitals, I’m just that sort of person. So, I didn’t go.

“When the rash first came up, it was really painful.

“It was an excruciating burning sensation, and it felt like I had really bad pins and needles. It was horrendous, absolutely awful.

“At their peak, the blisters stood an inch high off my arm, and I had a lot of them. They were painful and full of fluid. It was really scary.

“It was the worst pain I have felt in my life.”

Tracy, who has three children with project manager husband Lee, 45, has been left permanently scared by her injuries.

She is still suffering more than two months after being poisoned and is having to use blister cream and painkillers every day.

She added: “It’s really difficult to stay out of the sun but you have to because it accelerates the poison.

“It’s the middle of summer and I’m having to wear long-sleeved jumpers and gloves. We’ve had to cancel holidays because I can’t be exposed to the sun.

“It can flare up so easily, you only need to brush up against it slightly, and that’s that.”

“If you do come into contact with it, and then you’re out in the sun, that makes it worse.

“Now it’s just a case of trying to warn people of the dangers.

“They can grow up to five metres tall, I dread to think what would happen if a child’s face came into contact with the plant.

“People need to be aware of what can happen. They’re plants that are just evil.”

Giant Hogweed was originally brought to the UK from Central Asia in 1893 and now commonly grows on riverbanks and wasteland.

Its leaves, stems, roots, flowers and seeds contain toxic components which can be transferred by contact and make exposed skin extremely sensitive to sunlight.

Within 24-48 hours, rashes, burns and blisters may begin to appear. The toxins affect almost everyone but children are particularly sensitive.

Blisters caused by Giant Hogweed tend to heal very slowly as they can damage DNA, and severe blistering may re-occur for many years.

The blisters can also develop into phytophotodermatitis, a type of skin rash caused as a result of sensitivity to chemicals in certain plants and fruit which flares up in sunlight.

If the plant’s sap is rubbed into the eyes, it can cause temporary or permanent blindness.

The NHS advises those who come in contact with Giant Hogweed to cover the affected area and wash it with soap and water.

Mrs Brookes is one of several victims to be struck down by the sinister plant in recent weeks. 10-year-old Lauren Fuller, from Thornbury, Bristol, was poisoned after coming into contact with the weed while on a fishing trip with her dad in Loch Lomond, Scotland.

And dogwalker Ann Quinlan, 56, was rushed to hospital after she brushed past the plant with her bare legs in Forty Hall Country Park, in Enfield, north London. 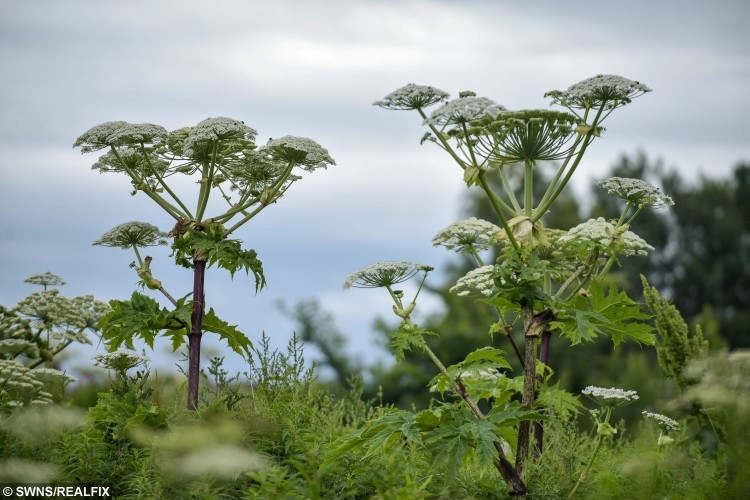