A student has been diagnosed with a cruel condition which means she will never enjoy pizza, cookies or steak again – because she is SICK whenever she eats.

Hannah Ritchie, 20, suffers from gastroparesis, an incurable disorder in which the stomach’s muscles are partially paralysed.

The condition interferes with normal digestion and causes severe nausea, vomiting, and diarrhoea – symptoms which first began to affect Hannah in 2010 when she was 12.

At its worst, the illness – which she was officially diagnosed with in February – left her vomiting six times a day and running to the toilet with chronic diarrhoea up to 30 times. 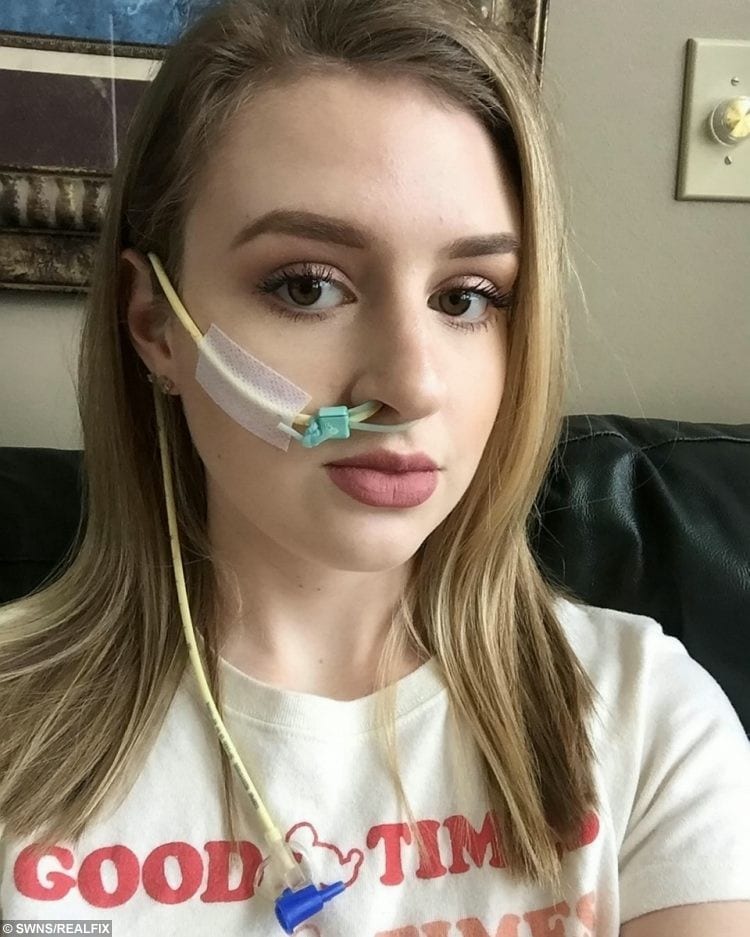 Earlier this year, Hannah, who vlogs about her chronic illness on YouTube, underwent surgery to cut the pylorus, a muscle that allows emptying of the stomach.

When that didn’t work she was fitted with a temporary feeding tube which bypassed her stomach and inserted nutrition directly into her small intestine via her nose.

After cutting out eating following the surgery in July, Hannah’s condition vastly improved and her trips to the bathroom reduced to just six times a day.

It led to her being fitted with a permanent feeding tube on Thursday, which will hopefully improve her quality of life and allow her to complete university.

Hannah said it was “psychologically the hardest thing” she has ever done because it confirmed the knowledge that she will never enjoy eating her favorite foods again. 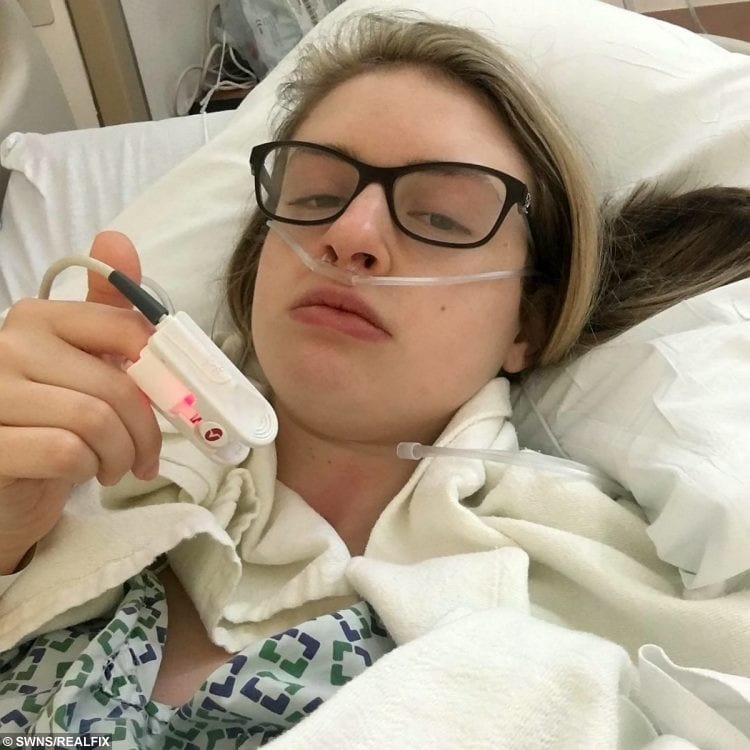 Journalism student Hannah, of Vermilion, Ohio, USA, said: “At my worst point I was throwing up six times a day and suffering from chronic diarrhoea.

“I was going to the bathroom about 30 times every day when I was 16.

“My life was miserable and I was really sick.

“I had a surgery in July to try and help my condition, but it didn’t work and I was fitted with an NJ tube.

“This is how I eat. I am hooked up to it 23 and a half hours a day and basically this has given me my life back.

“I don’t have to worry about eating anymore and getting sick from it.

“This week I’m got a J tube, which is a permanent feeding tube.

“It’s been a really difficult thing to come to terms with because it’s bittersweet.

“I won’t be sick as often or have to use the bathroom as often, but at the same time, it will be there forever.

“It will help me get my life back but it’s psychologically the hardest thing I’ve ever had to do.

“Food is such an important part of life and it’s such a social thing.

“When it’s your birthday you want to go with your family for dinner, you can’t.

“I’m not perfect. I eat sometimes but when I do, I get so sick.

“I immediately begin vomiting and about an hour later the diarrhoea will start.

“I miss everything. Pizza, steak, pasta, bread, cookies. Everything.”

She began suffering chronic diarrhoea, vomiting, and nausea and says she “never really got better after that”, which left doctors baffled.

In February, Hannah was diagnosed with gastroparesis, which means her damaged vagus nerve is preventing the stomach and intestinal muscles from functioning.

Gastroparesis affects more than 1.5 million individuals in the US, 100,000 of whom suffer from severe cases, according to Pharmacy Times.

It can be caused by diabetes, a reaction to medication, or neurological disorders but in Hannah’s case, medics are unsure of the trigger.

She also lives with postural orthostatic tachycardia syndrome (POTS), a condition that affects the circulation of blood flow causing a rapid heart rate.

Hannah, a part-time reservations assistant, says it can be difficult to watch her sisters Haley, 16, Olivia, 12, and Allaina, 12, have the experiences she missed out on. 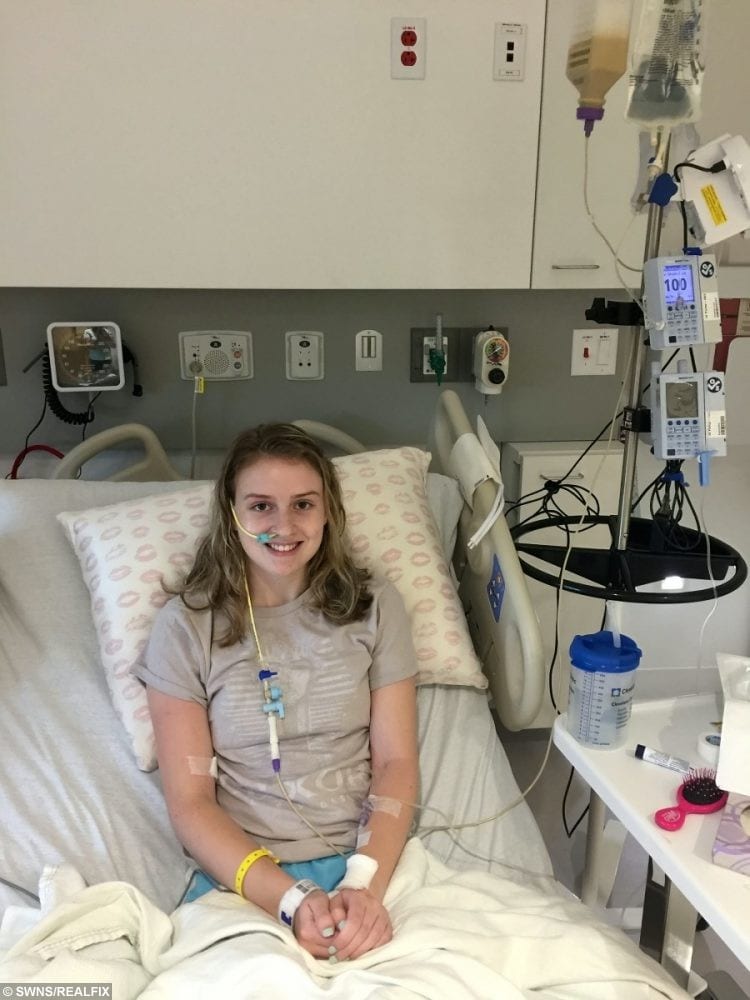 Hannah said: “I never got to have that typical high school experience which I get really sad about.

“My sister Haley is so involved in her high school and band which can be hard for me, but I love her so much I can’t be resentful.

“I wish I could just get up and go to university like a normal person but I just can’t. Sometimes it feels very unfair.”

“But at the same time, I can’t let it control my life.

“Last September I went on a family vacation to Europe and even though it took so much planning with my illness, it was the most rewarding experience.”

Hannah said she would never have been able to cope with her illness without her pharmacist mother Julie Ritchie, 46, and her dad Scott, 49, a senior manager. 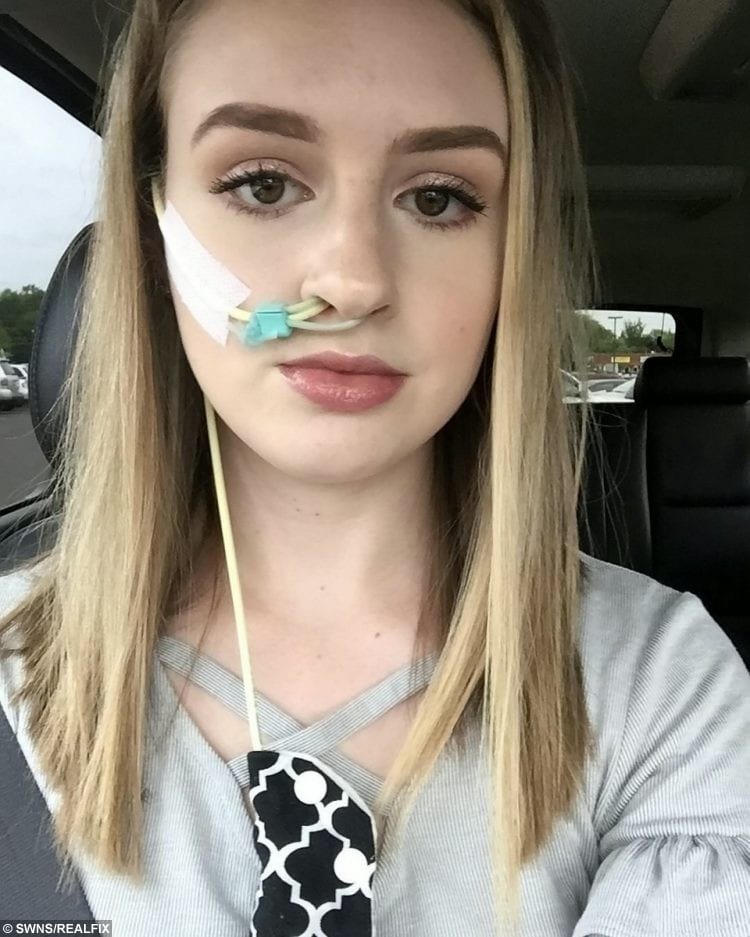 She hopes her feeding tube will allow her to complete her online journalism degree and allow her to have normal life experiences for the first time in almost a decade.

Hannah said: “I can not control my illness, but I can control how I look at the world and how I approach my life.

“And hopefully this decision will allow me to have a better quality one.”