A ‘sugar bag’ baby whose heart stopped beating for nearly half an hour has stunned medics – and celebrated her first birthday.

Lacey Sherriff weighed a tiny 1.4lbs when she was born three months prematurely and had to undergo emergency surgery at just five days old.

The tot was suffering from a severe condition that affects pre-term babies called necrotising enterocolitis (NEC), which causes a portion of the bowel to die. 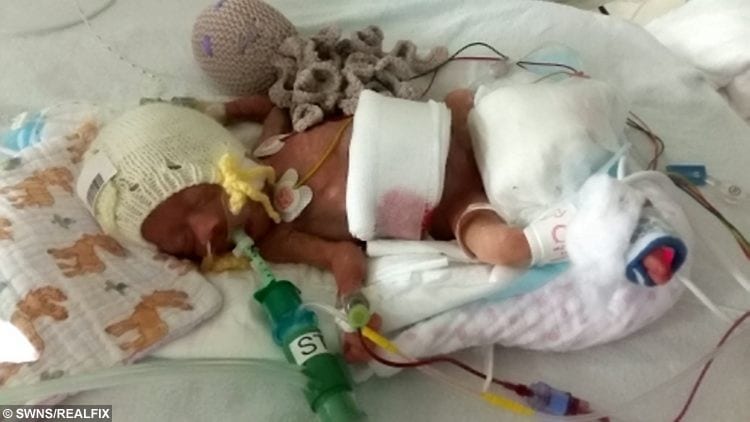 During the surgery, Lacey had a cardiac arrest and her heart stopped for 12 minutes due to excessive bleeding before doctors managed to stabilise her.

It took a further ten minutes for the team at St George’s Hospital in Tooting, south west London, to resuscitate her.

Her parents had started to prepare themselves to say goodbye when Dr Donovan Duffy, consultant neonatologist, emerged and told them that Lacey had pulled herself through and was now more stable, though very unwell. 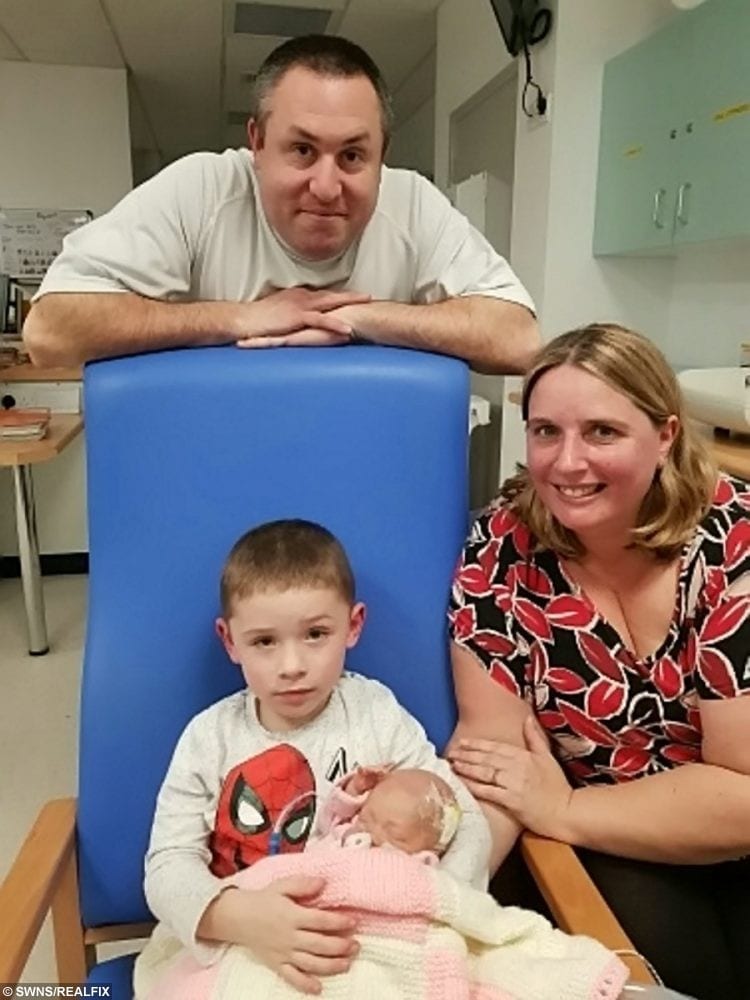 Lacey’s mum Louise said: “It was incredibly scary having an emergency c-section but it was the only option to give Lacey a fighting chance of survival, but then for her to then be so unwell to be rushed to St George’s at five days old for surgery.

“At this point, I still hadn’t been able to hold my baby and the thought of her having surgery was terrifying.”

The surgery revealed that it wasn’t recurring NEC signs, but instead her stoma – similar to a colostomy bag, which had been fitted during her first surgery – wasn’t working as it should.

Surgeons were able to resolve the issues and the surgery was a success.

After 111 days in hospital, and a three hour round trip for Lacey’s parents every day, Lacey was well enough to be discharged home on February 3. She celebrated her birthday on October 17.

She has also undergone further surgery to reverse the stoma, which was successful. 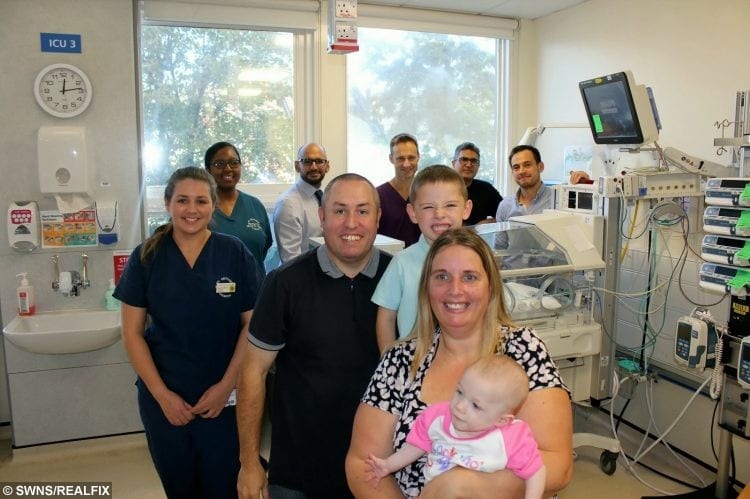 Louise, 39, added: “The hardest thing was that we didn’t know what would happen but I knew she had everything and everyone she needed around her doing their best.

“There was nothing else anyone could do.

“We didn’t think she’d survive surgery and thought we’d be registering Lacey’s birth and death certificates at the same time.

“It was such a rollercoaster of emotions first thinking we’d be going home as a family of four, to three, then back to four again.”

Dr Thomas Breen, consultant anaesthetist at St George’s who led the theatre and resuscitation team, said: “Undergoing major surgery at such a young age, especially as a premature baby, has its risks but Lacey had minimal chance of survival without.

“There were lots of people in the theatre that night – from myself and the anaesthetic team to the surgical, nursing and neonatal staff – all to give Lacey the best chance.

“The operation was going well, but she deteriorated and we started to fear the worst, but we didn’t give up.

“Lacey is clearly a fighter, we supported her in every way we could but she was the one to pull herself through – defying all the odds.

“She truly is a remarkable little girl and it’s so great to see her doing so well now.” 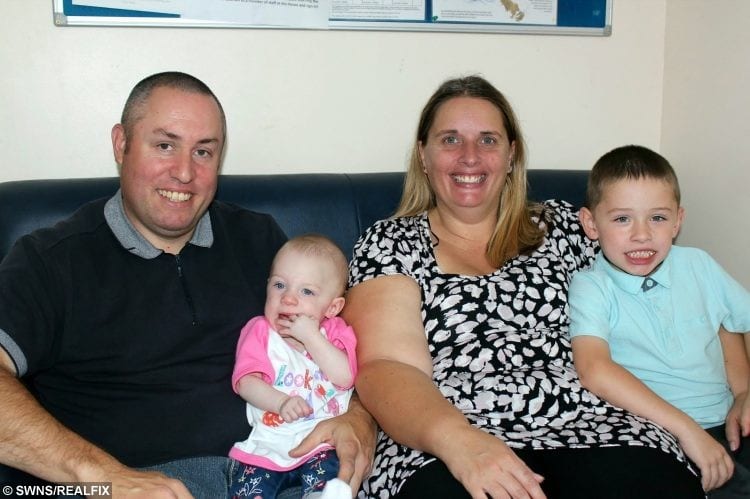 “Roughly a quarter of babies with NEC need surgery to remove the diseased bowel and unfortunately a third of those operated on won’t survive.

“It’s remarkable Lacey is so well now as the mortality risk is much higher in the smallest babies like she was and considering what happened in surgery with her prolonged resuscitation.

“The doctors, nurses and support staff who cared for her should be proud.”

Louise and Lacey’s dad Philip, who live in Ashford, Kent, are enjoying being back at home as a family of four with Lacey and their five-year-old son Alfie.

Louise said: “Family life was difficult for the four months that Lacey was in hospital and I was blown away by the support provided at St George’s not least for Lacey’s clinical care, but for the support my husband and I received to help with the things you don’t automatically think about such as parking and petrol costs – those little things made a real difference.”

“Each day, I’d take Alfie to school, then drive up to St George’s and spend the day with Lacey before rushing home to put Alfie to bed in an evening – that’s when my husband would see Lacey.

“I wanted to be with her 24/7, but my son also needed me, and I needed him, so it was important to keep some normality.

“I knew she was in safe hands – the best hands.”

“My daughter wouldn’t be celebrating her first birthday if it wasn’t for the staff at St George’s.

“The care from the moment we arrived to when we left was phenomenal. I can’t fault it.”

“It truly was a multidisciplinary effort from everyone in the operating theatre to neonatal staff – and of course Lacey herself and her family.

“She’ll continue to have follow up appointments, but she should develop and live a normal life, which is excellent news. Happy first birthday, Lacey – the miracle baby!”

Two Sisters Have Defied 2,000-1 Odds By Giving Birth To Their Babies On The Exact Same Day In Neighbouring Rooms

Two Sisters Have Defied 2,000-1 Odds By Giving Birth To Their Babies On The Exact Same Day In Neighbouring Rooms