Spooky Boo, a five-year-old Lurcher, goes out for a walk on her custom made wheelchair with her owner Tania Morris. Spooky Boo was left paralysed after a freak accident. February 16 2016. A loveable deaf rescue dog who was left partially paralysed following a freak accident on a walk has been able to move about again thanks to a special set of wheels. See NTI story NTIDOG. Lurcher Spooky Boo was left with an acute non-compressive disc extrusion and myelomalacia, softening of the spinal cord, after falling over on New Year's Eve. Her dedicated owners Tania and Eddy Morris have been alternating leave from work to nurse her following the freak accident and have spent almost £3,000 on the wheelchair in the hope she may enjoy walkies once again. As well as the custom made wheelchair, Spooky Boo is undergoing hydrotherapy and physiotherapy and already the couple have seen improvements. They are hoping people can donate unwanted garden tiles which would otherwise be destined for the scrapheap so they can tile over their gravel garden to make it easier for Spooky Boo to get around.

A rescue dog left paralysed after suffering a similar injury to Superman actor Christopher Reeve is back on her paws – thanks to a hi-tech wheelchair.

Female Lurcher Spooky Boo broke her back after slipping on wet grass during a walk on New Year’s Eve.

The freak accident caused the five-year-old pooch, who is also deaf, to suffer an acute non-compressive disc extrusion and myelomalacia – a softening of the spinal cord.

Owners Eddy and Tania Morris rushed their beloved pet to the vet who warned them she might have to be put down.

But after five days in the vet’s hospital, Spooky Boo came home and took her first steps since the accident thanks to a revolutionary wheelchair.

The contraption, which cost £2,700 and is made from light-weight aluminium, attaches to Spooky Boo’s back paws and enables her to get about thanks to a system of gears.

Tania, who works for a law firm and has three other rescue dogs which she cares for at her home in Worcester, said: “Ed took her out a walk on New Year’s Eve.

“She loves to run and when she was off the lead she bolted off but somehow slipped on some grass, twisting her legs.

“When she fell and twisted, some of the jelly from the discs in her back shot out into her spinal cord and caused a lot of damage.

“She cried out in pain and Ed gathered her up and brought her home.

“We took her to our local vet who asked if we wanted her euthanised and, if she was in constant pain, that would be the humane thing to do.

“But the vet said there was no sign of pain, she had lost the use of her back legs but there was something we could do about that.”

Spooky Boo spent five days in the vets before being transferred to a specialist unit in Birmingham where an MRI scan revealed her injury had caused her spinal cord to soften.

The couple researched on the internet and discovered a French company which supplied specialist dog-wheelchairs and it was delivered last Saturday.

As well as the custom made wheelchair, Spooky Boo is undergoing hydrotherapy and physiotherapy and already the couple have seen improvements.

They are now asking people to donate unwanted patio slabs which they can use to cover their gravel garden to make it easier for Spooky Boo to get around on her wheels.

Tania said: “We had seen dogs in wheelchairs before having happy lives and if the worse case scenario was that she needed the chair for the rest of her life, then that’s what we will do.

“She loves people, she’s a really sociable girl and on walks she used to prefer fuss from people rather than other dogs.

“That’s what has been so sad since the accident, she’s been housebound and its made her a bit depressed I think.

“She just likes to watch the world go by.

“We’re lucky because she is already showing signs of improvement, we’ve seen her gaining strength.

“I don’t think she’ll ever be able to run again but our aim is to get her to be able to potter around the house safely and she is getting there but it will be a quite a long process of rehabilitation.

“She hasn’t got the strength to pull herself over the gravel which is why we’re hoping people can donate any leftover paving slabs.

“We’re not concerned about size or shape, just that we can help Spooky Boo get around a bit easier.” 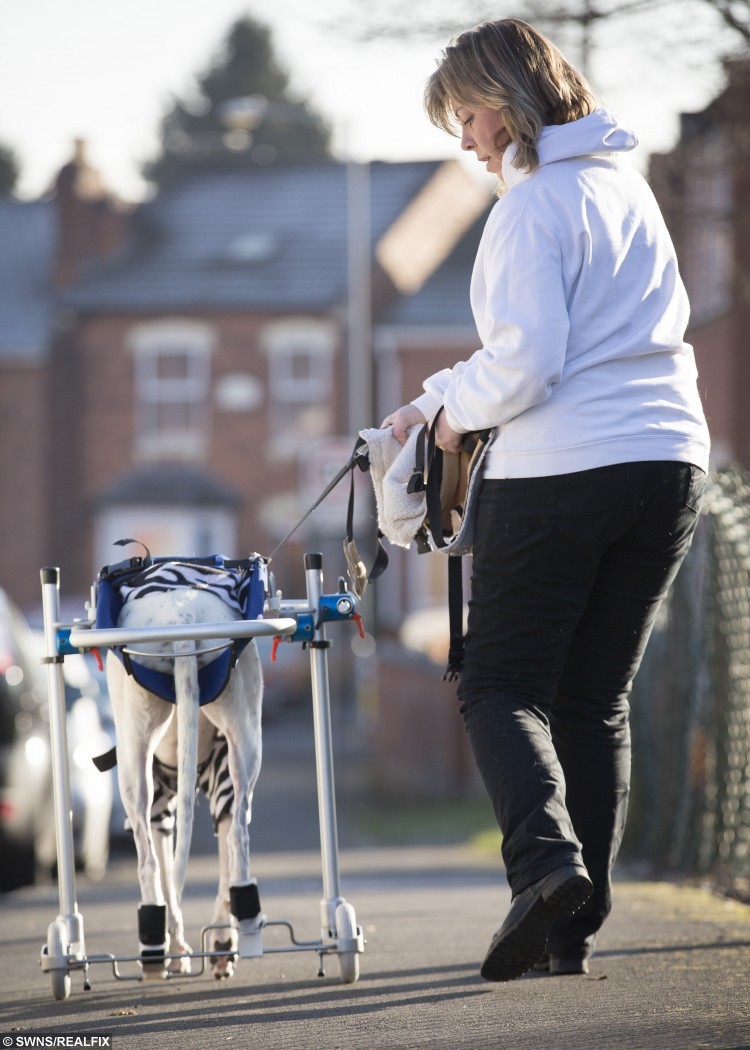 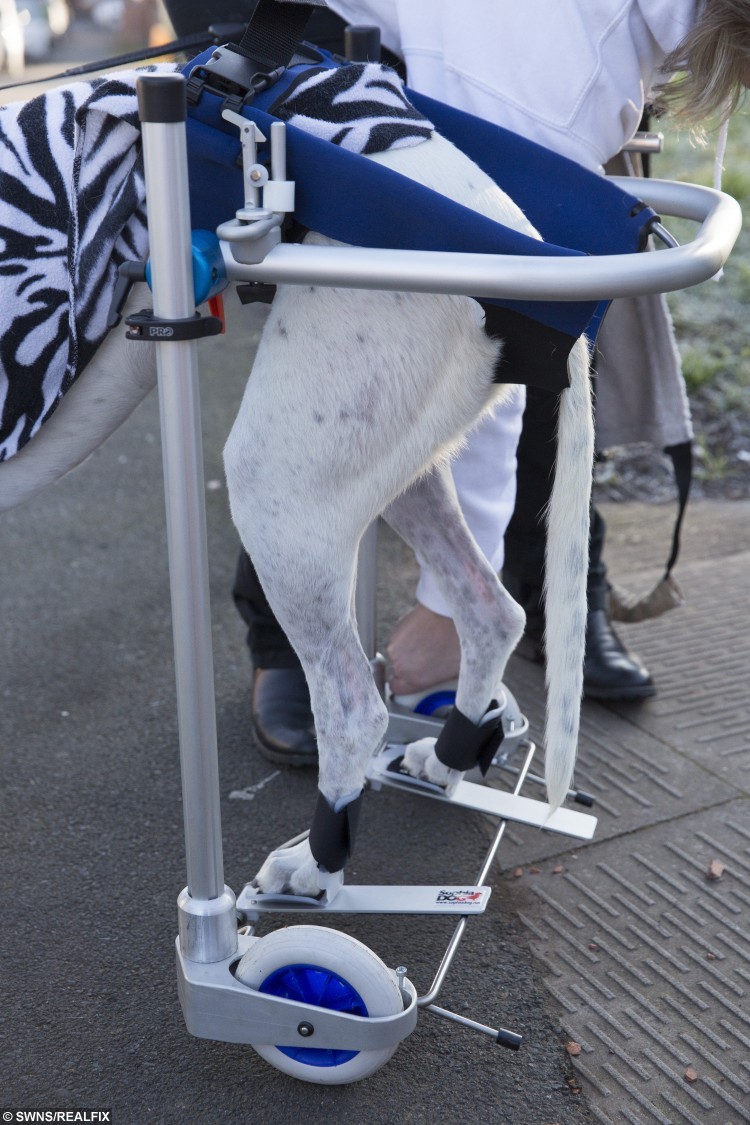 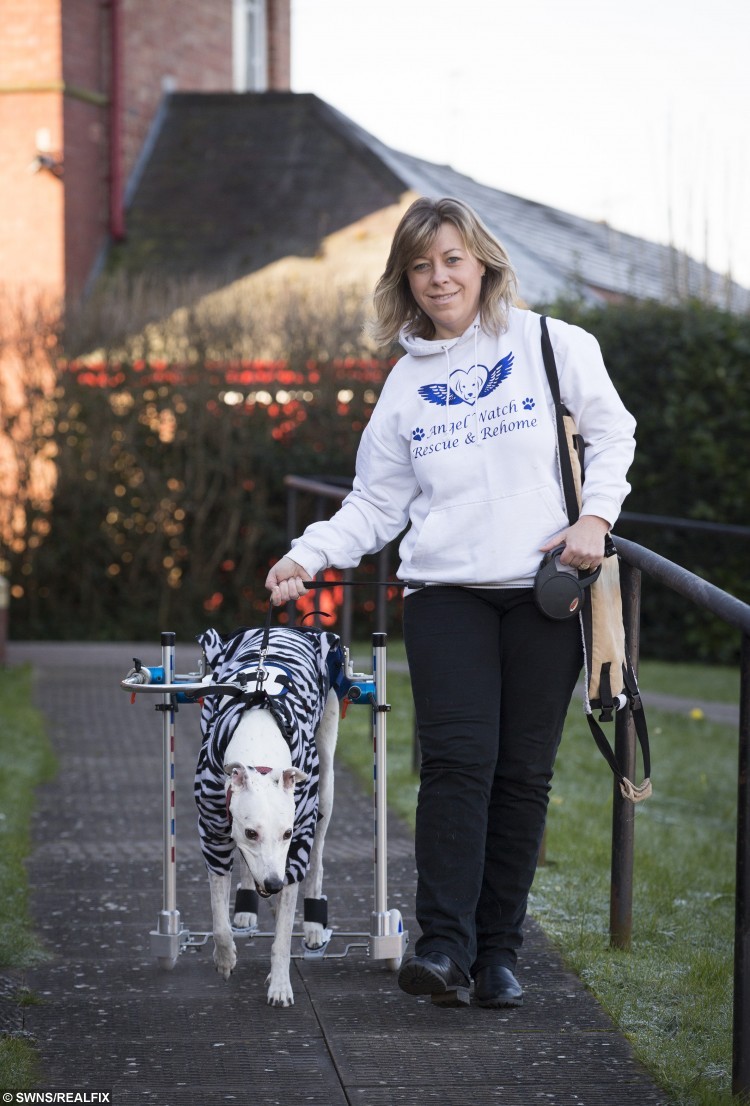 The vet fees, physiotherapy and hydrotherapy treatment is covered by the couple’s pet insurance but they needed to pay for the wheelchair out of their own pocket.

Tania and Eddy, a Tesco delivery driver, juggle their jobs to care for Spooky Boo who requires 24-hour care.

The couple, who do not have children, have previously adopted a three-legged, one-eyed Romanian street dog called Peg.

WATCH: Big brother spent his own money he’d saved up for a Playstation 5 on a console for his little sibling instead

WATCH: Teen with Down’s syndrome was invited to play for his favourite team – and scored the first goal

WATCH: Three-year-old gives her mum a stern telling-off after finding one of her drawings – in the BIN