(L-R) Harley Rose, Shannon Rose and Nicola Rose. A quick-thinking gran sprang into action to deliver her new grandson at home on her sofa. See NTI story NTIGRAN. And unwittingly, Nicola Rose became a hero as she saved the life of the newborn Ã who had his umbilical cord round his neck. Nicola sprang into action when 24-year-old daughter Shannon Rose went into labour at her home. Sharon Upton, an emergency medical dispatcher with East Midlands Ambulance Service (EMAS), picked up Nicola's 999 call and talked her through the birth.

A gran who delivered her new grandson at home on her sofa has been hailed a hero after saving his life when he was born with the umbilical cord wrapped round his neck.

Quick-thinking Nicola Rose, 50, had been sleeping at home when her pregnant daughter Shannon Rose, 24, told her she was having contractions.

Nicola called for a taxi to take her daughter to hospital, but by the time it arrived Shannon was ready to give birth.

She dialled 999 but all the ambulances were on emergency call-outs so Nicola was forced to deliver her grandson Harley herself.

Baby Harley was born at 12.22am last Wednesday after a short 37-minute labour.

During Harley’s birth, the umbilical cord became wrapped around his neck and the tot, who weighed 7lbs, turned purple and stopped breathing.

But Nicola came to the rescue by untangling the cord and saving her new grandson’s life at her home in The Meadows, Notts.

Sharon Upton, an emergency medical dispatcher with East Midlands Ambulance Service (EMAS), responded to Nicola’s 999 call and guided her through the birth.

Nicola, a laundry assistant, said: “I just did what anybody would do. But without that lady on the phone, the paramedics, the surgeon, the doctor and the midwives, I don’t know what would have happened. They were just fantastic.

“The scariest bit wasn’t knowing I would have to deliver him, it was when he stopped breathing.”

“I can’t believe how calm I was. The slightest thing usually panics me but I knew I had to get on with it and save that baby’s life.

“He came out and was really dark purple and had the cord around his neck. He wasn’t breathing. I had to pull it from around his neck with my hands. It was awful.

“I kept rubbing his back and I felt a tiny breath and he started breathing and began to cry- it was such a relief.”

Minutes after the delivery paramedics arrived at the family’s home and rushed Shannon and Harley to the Queen’s Medical Centre in Nottingham.

She was haemorrhaging so badly medics gave her seven pints of fluid and blood in a desperate bid to save her life.

The mum, who also has two-year-old daughter Amelia, added: “If it weren’t for my mum, I don’t think I’d be here. The doctors said I had lost a lot of blood.”

“I was the one panicking more than anything. It just happened so quickly.”

“When Harley was born I didn’t think he was alive. His life was in mum’s hands. I’ll always be so grateful to her.

“Mum was trying to be calm so she didn’t worry me.

“The ambulance staff talked her through what to do, and mum was rubbing Harley’s back until we heard a little breath and then he burst out crying.

“I was so relived when I heard him cry. I knew he was going to be okay.” 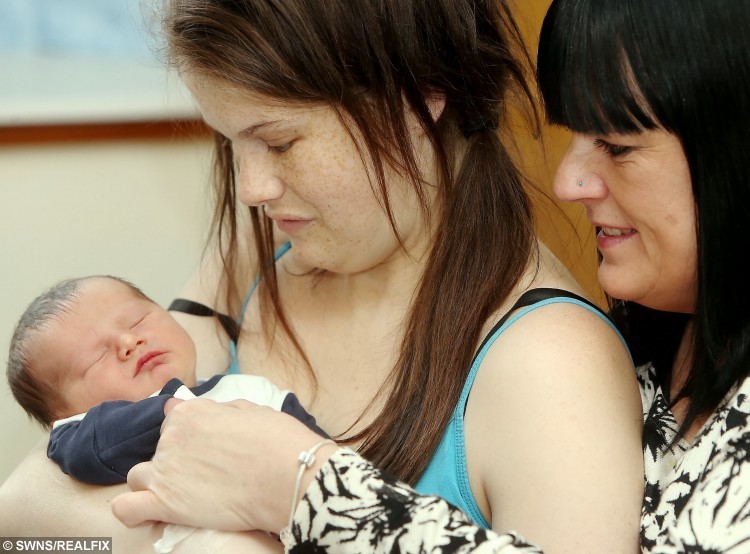 Call operator Sharon, 40, of Nuthall, added: “My role really was to keep them as calm as possible and I had to think quickly and give instructions.

“It was great to know I helped Nicola in that situation but I said to her she was great in what she did.

“I was just happy that it turned out well.”

A spokesman for East Midlands Ambulance Service said: “We’re delighted this story had such a happy ending and to know our staff played a vital role.

“We were dealing with a surge in 999 calls at the time and although we dispatched the nearest available ambulance, baby clearly wasn’t going to wait for them to arrive.

“This is when Sharon stepped in, keeping calm and providing Nicola with detailed instructions on what to do.

“Seven minutes after the birth, paramedics arrived and provided clinical care to baby and mum making this a real team effort.

“Our congratulations go to everyone involved.”