Picture shows Jo Irving, in 2011 on holiday in Thailand.See Ross Parry Copy RPYSKIN Jo, 31, noticed she had a pearly lump at the side of her nose which never seemed to heal. At first, she didnt really think much of it, but after a couple of years it started bleeding and wouldnt go away. On a post-natal check after giving birth to son Ryley, two, Jo mentioned the blemish to the doctor in passing. He suggested Jo should get it checked out at Clifton Hospital, but she pushed it aside for another few months, still not thinking much of it. When she finally did book herself in for an appointment in April last year, she was in for quite the shock - the blemish turned out to be skin cancer.

Squeezing her pregnant bump out of the tanning booth, Joanne Irving hobbles over to the mirror.

The smell of burnt flesh still lingers in the air, but Joanne barely notices.

She’s spent half her life on sunbeds, sometimes going five times a week – her nose has grown use to it.

While admiring her golden complexion, Joanne’s eyes flicker to the pearly lump at the side of her nose.

Although small, it’s been there for two years now, never healing.

It’s never bothered her much before; it’s easily covered with make-up.

Joanne Irving, a flight attendant, from Blackpool, says: “I first noticed the lump four years ago.

“It was a small boil under the skin with a pearly white head on the top. It didn’t bother me in the slightest at first. I didn’t think much of it.”

“The only time I thought about it was in the morning when I looked in the mirror to put my make-up on and then my make-up would cover it.

“I thought it would go over time but my boyfriend ,Bobby started mentioning it quite a lot to me and would tell me to go and get it checked out.”

Even when the lump started bleeding Joanne says she still didn’t feel the need for any concern.

“It wasn’t bleeding a lot though so I just thought I had caught it when having a wash or scratching my face while sleeping.

“I also used to pick at the scab which is the reason I thought it would never heal.

Joanne says she first mentioned the lump to a doctor when she went for her post-natal check-up with her son Ryley, now two, in August 2012.

“The doctor told me to just see how it goes, but if I see any changes in it and it keeps bothering me, I should go back.

“His reaction to it didn’t give me much cause for concern. I thought I was making something of nothing.

“It wasn’t until March the next year that I went for an appointment.

“The doctor looked at it and said whatever was in it had come out, which made me think it was just an infected spot.

“He gave me some cream and said it was a good idea to get it checked out just in case, so referred me to a skin specialist.

“Skin cancer didn’t even cross my mind because it wasn’t a mole and that’s what I thought skin cancer was.

“I didn’t realise there was different types.

Joanne says she started thinking things could serious when she arrived at Clifton Hospital, Lancashire, in April 2012 for her appointment with the specialist.

“When I got in to see the doctor, he looked at it straight away and called it a ‘rodent ulcer.’

“He said, ‘I don’t know what your relationship with the sunbeds is but I suggest you never use one again.’

Joanne had been going on sunbeds since she was fourteen, at one point averaging on five times a week.

“I was addicted to being brown.

“I wouldn’t go on a night out unless I’d had a sunbed.

“If I went on holiday and didn’t come back with a tan, I would be disappointed about the whole holiday.

“I even went on when I was pregnant with Ryley, for the full nine months.

“I did some research online to see if there were any risks but could find no clear evidence about the effects of UV rays from sunbeds on an unborn baby.

“The doctor gave me a bit of a telling off. He’s probably sick to death of seeing people go in who have abused the sun.

Joanne says she didn’t fully understand the full extent of what the doctor said until she got back to her car and Googled the term ‘rodent ulcer’ on her phone.

“When a skin cancer website flashed up at the top of my search results, my stomach dropped.

“I drove home in a panic.

“Bobby tried to reassure me I was being dramatic, but a follow up appointment two weeks later revealed I wasn’t.”

When the doctor confirmed she had skin cancer, Joanne says her emotions were a mix of relief and terror.

“I was relived to finally know what it was, but terrified about what would happen to me.

“The idea of using one made me feel sick.

“It took months to lose even a little bit of colour. It showed how much I’d gone on the sunbeds when I didn’t need to.

In July 2013, Joanne was wheeled into the operating theatre at Clifton Hospital to have the lump removed.

“They had to take skin from my right ear because once they’d removed the ulcer, they didn’t have enough skin left to stitch up the hole.

“I was under local anaesthetic, so I could feel them tugging and snipping at my face.

“It was a horrible feeling but I had nobody to blame but myself.

“It was all my fault. I couldn’t believe how stupid I’d been.

“The true extent of what I’d done to myself sunk in.

“I felt really embarrassed about how naïve I’d been, especially going on at nine months pregnant.

“I was worried about Ryley, and how he’d been affected.

After the operation had finished, Joanne says she looked in the mirror at her swollen face and burst into tears.

“When I felt them snipping at my skin, the area they were cutting felt huge, and I started panicking about what it was going to look like. 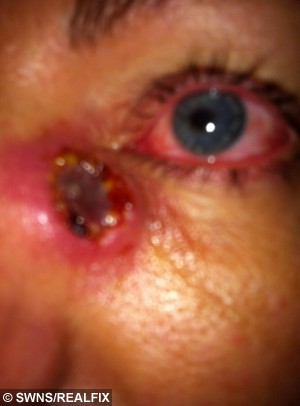 “It was right on my cheek so I knew there would be no way of hiding it.

“The scar was a lot smaller than what I thought it was, but it still looked hideous.

Four days after she’d had the operation, Joanne returned to hospital as her wound was beginning to smell cheesy and she thought it was infected.

“When the doctor took the bandage off, the wound had leaked puss and had formed a scab, which it wasn’t supposed to do.

The doctor told Joanne the skin graft had died.

“They told me if the first one didn’t take then it was more than likely that the second wouldn’t either. I was devastated.

“I had a hole in my face for five weeks before it healed.”

“I had to wait that long for the scab to fall off and slowly heal up properly.

Joanne says now the ulcer is removed, the cancer is all gone, but now she’s had it, there’s no reason why it can’t come back again.

Joanne says since she found out she had skin cancer; she has not, and will never, use a sunbed again.

“I was too afraid to even put on fake tan at first in case it made me miss the appearance of being brown and tempt me to go back on again.

“I wanted to get used to being my normal colour. 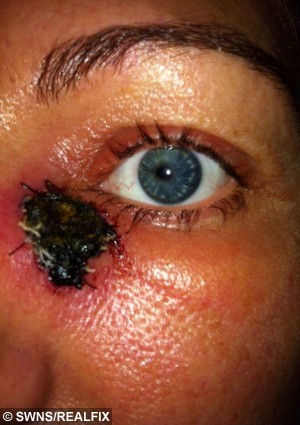 “Now, I look back at pictures of myself when I went on the sunbeds all the time, and I looked ridiculous.

“All my friends used to joke and say I had ‘tanorexia’ because I could never see my true colour.

“I just thought they were jealous of my tan.

“At one point, when I was around twenty-one, I used to fake tan and go on the sunbeds.

“Being pale doesn’t bother me any more. I’ve adapted to it.

Joanne says went to school with used sunbeds and her and her friends would always be in competition to see who the brownest was.

“We’d constantly be putting our arms together and compare tans.

“At school l’d go on three times a week and then when I left and started earning my own money I increased it to five times a week.”

“My skin took to it fine. I never burnt or anything like that.

“My mum used to warn me off the sunbeds and told me to be careful with my skin.

“I used to lie to her about how many times I’d go on and how long I’d go on for.

“She’s feel a bit silly that I managed to fool her. 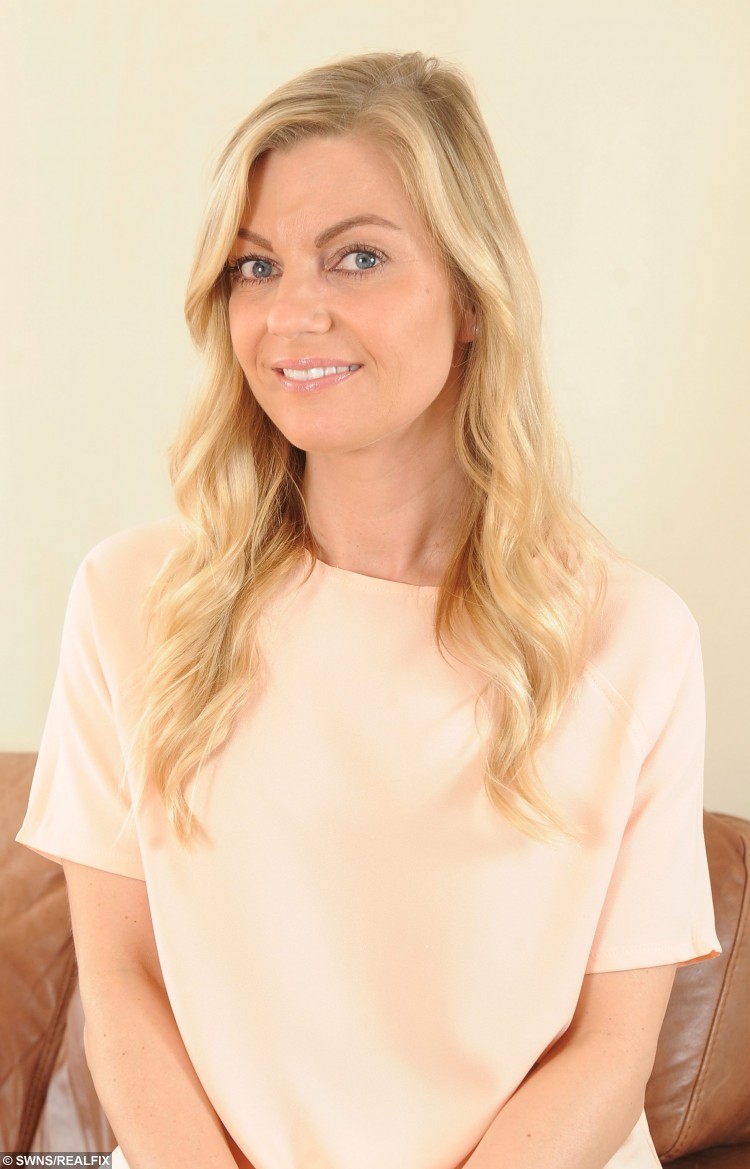 Joanne says after her experience, she would never allow her children to go on a sunbed.

“When I see school girls coming out of tanning salons I feel disgusted.

“I make sure Ryley is always covered in factor-50 sun cream – even for just half an hour in the park.

“I’m not taking any chances.

“I’ve learned that tanning addiction is a real thing, Endorphins released by UV rays cause people to want more.

“I’d much rather be pale than not be here for my son.

“I’m glad I’ve kicked the habit once and for all.